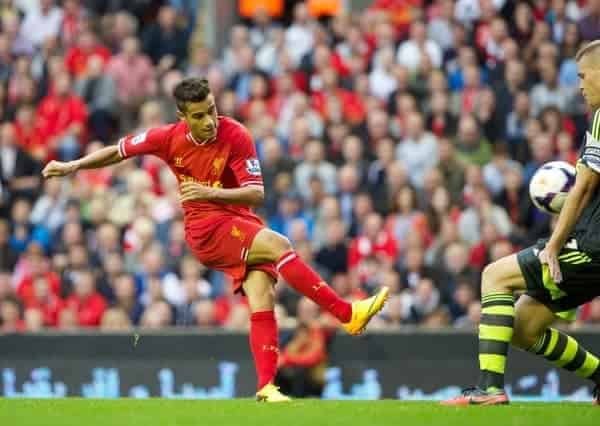 Liverpool fans have taken to Twitter to vent their frustrations that Brazilian attacker Philippe Coutinho will be sidelined for around six weeks with a shoulder injury.

The club have confirmed that Liverpool’s number 10 will have “surgical stabilisation on the AC joint in his shoulder” after a challenge from Swansea’s Ashley Williams forced him from the pitch during the second half of the Reds’ 2-2 draw at the Liberty Stadium on Monday.

The news comes as a big blow to Brendan Rodgers’ side, who sit top of the Premier League table undefeated after four games.

Coutinho has continued the magical form this season to that he showed during the second half of 2012/13, after signing from Inter Milan in the January transfer window.

The only saving grace for Liverpool may be the imminent return of Uruguayan forward Luis Suarez – who completes his ten match ban this Saturday, and the recent acquisition of Victor Moses on a season-long loan from Chelsea.

New Spanish signing Luis Alberto also impressed this week in front of Rodgers, scoring a second half hat-trick for the Liverpool U21s against Sunderland at Anfield on Tuesday night.

How would you change things around in Liverpool’s attack with Coutinho out injured until the end of October? Let us know in the comments below, or on Twitter @thisisanfield:

Here’s what some of the fans and Liverpool FC writers are saying about Coutinho’s injury and the consequences:

Gutted about the Coutinho news. Couldn't be a better time for Suarez to come back. #LFC

Coutinho will be sorely missed by #LFC. Aspas has failed to impress so far and not convinced Alberto is ready to step up.

Whilst its a blow loosing Coutinho, this 6 weeks also takes him out of the firing line for a while. Just what he needs IMO.

The only solace of consolation on Coutinho's injury, is we have 2-3 options to replace him. Shows depth & breadth of squad. #LFC.

Really bad news with Coutinho's injury. Move Henderson central and bring Raheem into the 3 behind Sturridge until Suarez returns. #LFC