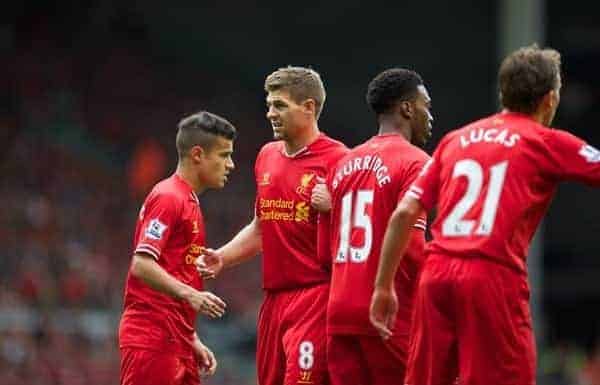 Liverpool FC: Three ways to get into the Top 4

Marco Lopes assesses what kind of league performance Liverpool may need to produce in order to earn Champions League football.

Drama.  For all its tendency to practically gift the top spot on repeated occasions to one rather annoying Manc club, the Premier League lacks little in the way of dramatic twists and turns, playing out at times like a tense thriller.  Season 2013-14 has dawned, and already the signs are clear that it could the most unpredictable and intriguing season for some time.

It’s unprecedented territory. The top 3 clubs from last season all have new managers. One has a manager who is proven – and should theoretically make a dull but consistent show into the top 3. One has a talented manager, thoughtful, tactically perceptive, but considerably underestimated (even despite an incredible haul of 96 points in his only season with a certain Spanish giant). One has a manager who is a “winner” – the kind without trophies, earned after 10 years of amassing a winless record at the biggest stadiums in England.

Behind these 3 sides stand bean counters Arsenal; Spurs on the back of an impressive transfer window despite the loss of their talisman Bale; and of course Liverpool, having made a very impressive and solid start in footballing matters on and off the pitch.

Bring forth the stage, set for a very competitive Premier League season.

Predictions are dangerous. They stand like a mantelpiece upon which over-confident football fans get impaled once their brave pre-assessments turn to egg on their faces. However, in planning for this season, Liverpool need to make some assumptions about which sides will be in the mix for 4th place.  In developing a strategy for the season, it’s critical to try and establish the key games and opponents that ultimately need to be overtaken in the race for the Champions League.

So – those predictions then. I think it’s fair to say that the Premier League will take on a blue shade this season with Chelsea and Man City taking 2 of the 3 spots in the top 3. The arguments are that both clubs have exceptional squads with significant depth and talent. Mourinho may have been out of England for a while, but he has a knack for winning titles with little time to settle in, and he arrives with a slightly less balanced, but nonetheless supremely talented players.  I think Pellegrini will take a little while to settle, but expect Man City to be extremely dominant once they take shape and form into the new season.  It’s also likely that the new title winners will be one of these 2 sides as well.

That effectively suggests that the battle for the remaining 2 spots fall between Man United, Arsenal, Spurs and a resurgent Liverpool.

So the question is – how exactly should Liverpool go about claiming an all important Champions League spot in the upper echelons of the table?

Method 1 – The Importance of the “Six-Pointer”

In the same way that 40 points seems to be “dead-cert” number to avoid relegation, 70 points seems to be the number that on average for the last 8 years at least, seems to qualify you into the Champions League conversation.  The question, of course, is how you manage to earn those points. Is it compromised solely of wins against weaker sides? Or do teams that finish 4th tend to beat teams that are directly competing for the same position in the table?

When Tottenham completed a double in the league after a 1-0 at Man City in 2010 in their penultimate game, they didn’t just earn 3 points. Crouch’s solitary goal took 3 points away from their closest top 4 rivals, effectively creating the opportunity for Gareth Bale to begin his reputation forming performances in the Champions League at the expense of the oil-funded stars from the Eastlands.  Those 6 points proved massive for Spurs in the context of them finishing 4th that season.

The importance of the “6 pointers” has proved sometimes critical for the sides finishing 4th in recent seasons:

What’s also interesting from the above table is that more often than not, it’s points taken off teams in 5th and 6th place that seem to be the critical injection in keeping ahead of the chasing pack for 4th place. Spurs took only 6 points off teams above them in 2009/10, but crucially, took all 6 points off Man City in 5th and 2 points off Villa in 6th.

So, if the average trend of the above 8 year sample of recent history holds true, it effectively means that Liverpool’s victory over Man United could already have season defining consequences for the race for Champions League football.  The visits of Spurs and Arsenal to Anfield could not be more important games to win – cup finals in themselves.  Trips to White Hart Lane, the Emirates and Old Trafford could tease as massive fixtures to define the dreams of a club intent on progressing in its quest for the taste of its romantic European nights.

On paper, the matches seem sufficiently winnable. Liverpool’s defence has been strengthened substantially and the versatility in attack can – arguably – only be surpassed by the 2 clubs flush with oil money.  There’s little that the Liverpool first team lacks by way of comparison to the squads that Arsenal and Man United can put out. The only rival that could possibly pose a concern would be Spurs, due to obvious strength in depth and quality in midfield that could control the relatively short number of options possessed by the Reds.

However, that’s obviously a very difficult route to take, and matches aren’t won on paper – after all, Liverpool’s record against Arsenal, Spurs and Man United in recent years doesn’t really make for the best reading.  If this proves to be a difficult task, is there an alternative strategy to achieve 4th?

Already, with Liverpool at the summit of the Premier League over the international weekend, many a fan has been lamenting the need for another 35 1-0 victories.  Fellow TIA writer Michael Sweeting believes that may only need to be 18.

Given the average of 70 points that seems to get a team within touching distance of the Champions League, Liverpool would likely need a record equal or slightly better than 21 wins, 7 draws and 10 defeats to ultimately finish near 4th place.  The question is of course, where Liverpool could accumulate all these wins.  The tables below show Liverpool’s win distribution over the past 8 seasons, compared to the team that finished in 4th place:

Immediately an interesting observation jumps out. Liverpool’s record against the Top 6, even in the post-Benitez years, is comparable, and in some cases superior, to the team finishing 4th.  So even though they haven’t necessarily pick up a great deal of points against the Top 6, neither have the teams finishing in 4th down the last 8 years.  The biggest difference, especially in the last 4 seasons is easy to spot. For all the concerns of Liverpool’s competitiveness of being able to beat teams above / near them, in the 4 years that Liverpool finished in the top 4, their results against the teams positioned 7th – bottom were more plentiful in terms of win.  A team finishing in the top 4 in the last 8 season averages 17 wins against teams below the top 6.  Liverpool have only managed an average of 13 wins against those sides in the last 4 seasons.

With wins against Stoke, Villa and Man United under the belt, there’s only 18 more needed to go, if this theory holds.  Assuming that the defending champions finish above Liverpool, and if you go by the averages for sides finishing 4th in the last 8 seasons, it effectively means another 3 wins against top 6 sides, and 15 more victories against the rest.

If Liverpool do win 15 matches against the mid-table and bottom sides, the issue here again may come down to whether or not Liverpool can turn 3 wins from the top 6.  The challenge is that it seems hard to picture picking up wins away, and taking a win from the visit of Chelsea or ManCity may be required, but not so easy by way of the script.  Alternatively, it may mean attempting win more than just 15 of the 28 fixtures against the mid-table and bottom sides (which leads into the 3rd method of achieving this).

All the above debate exposes an interesting thought.  Surely, if Liverpool are definitively stronger than the teams below them, why not the audacious suggestion that they, already 2 out of 2 in fixtures of this nature, aim to secure as many of the 84 points available from the teams below them? There are various reasons why this could work, not least of which that while some teams look improved and certainly outside bets at entering the Top 6, none of them have strengthened to the extent that Liverpool have done. There are some difficult away trips to come, notably Stoke, Swansea, and Southampton as examples.  But learning to accumulate 17-20 wins against the rest of the league outside of the top 6 is something that Liverpool have to learn to do anyway if they’re going to stay in the top 4.

The most competitive season in recent memory

All this of course – is total theory.  There’s elements of statistical fact; for example, no team in the Premier League era that finished lower than 3rd has won the Premier League title the following year.  I’ll remind you again of the above tweet by Michael Sweeting, where 21 wins has only failed to deliver a top 4 position once.

The truth is, this season is going to play out like a war fought on several fronts with different dynamics of weaponry and strategy.  The quality of footballers held by Chelsea especially in advancing positions is only rivaled by the ego and track record of the man leading them.  ManCity have a quiet, unassuming character in Pellegrini who also has arguably the envy of the league’s talent at his tactical fingertips.  Man United may have a “winner” leading them from the sidelines, but they also have the most prolific striker in the league’s recent memory, carrying them on his Dutch back.  Arsenal have, for once, spent their numerous pennies, on a playmaker whose only major weakness was to choose to spend years in the footballing legend graveyard that is Real Madrid. Spurs may have lost their talisman, but the lucky packet afforded to them by Bale’s money has been well spent in collecting talent that has configured a well balanced and very attractive squad.

Make no mistake, the above “methods” to finish in the top 4 (or win the title) will be employed in some way or another to effect what I believe will be the most unpredictable and exciting, dynamic top 6 sparring that’s been seen in the Premier League, possibly in its entire history.

Let’s hope Brendan Rodgers and his team throw the most devastating punches.