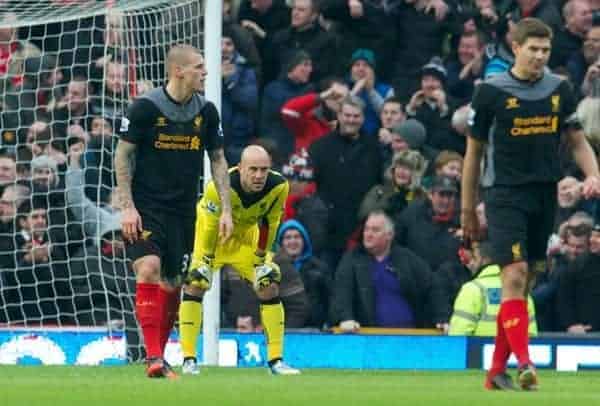 As Liverpool prepare to take on their arch rivals Manchester United at Anfield today, we take a look at the last handful of meetings between the two enemies.
[table id=27 /] Goals from Robin van Persie and Nemanja Vidic secured three points for Alex Ferguson’s men, despite a late resurgence by Liverpool. Daniel Sturridge pulled one back for the visiting Reds, but it wasn’t enough to get Brendan Rodgers’ side back into the game. As news broke of the findings of the Hillsborough Independent Panel, the majority of fans from both clubs united to remember those that had died in the disaster in 1989. Despite going down to ten men during the first half when Jonjo Shelvey was given his marching orders by referee Mark Halsey (Shelvey would tell Ferguson where to go on his way off the Anfield turf), Steven Gerrard gave Liverpool the lead just after the break. However, goals from Rafael and a penalty from van Persie turned things around for United, who endured Rodgers his third defeat in his first five games as Reds boss. The talk of the day was unfortunately Luis Suarez’s non-handshake with Manchester United’s Patrice Evra, just weeks after the Uruguayan had been found guilty of racially abusing the French defender by an independent F.A. panel. In a fiery battle at Old Trafford, two Wayne Rooney goals early in the second half put the game beyond Kenny Dalglish’s side, despite a late scrambled goal from Suarez himself. With the aftermath of Evragate still very much the talking point in the press, Liverpool, without the suspended Suarez, knocked their arch rivals out of the FA Cup in the fourth round. Daniel Agger’s opener on 21 minutes was cancelled out by Ji-Sung Park shortly before half-time. Dalglish brought on Dirk Kuyt as a second half substitute for Jamie Carragher and right at the death the flying Dutchman scored a dramatic winner.

In a very hard fought game by both sides, Liverpool had looked to have won this game thanks to a strike from Steven Gerrard shortly after the hour mark. However, United striker Javier Herndandez stole the points from under the Reds’ noses with an equaliser inside the final ten minutes. The game will mostly be remembered for the game in which Suarez was adjudged to have racially abused Evra and would set a dark shadow over games to come between the two sides.
[table id=27 /]