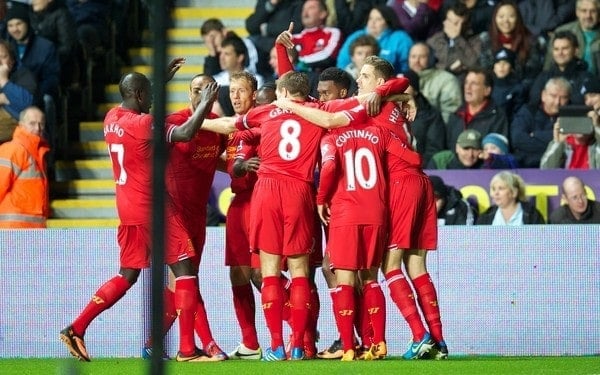 Liverpool regained top spot in the Premier League on Monday night sharing a feisty 2-2 draw with Swansea at the Liberty Stadium. The Swans took the lead as early as the second minute when former Red midfielder Jonjo Shelvey bumbled his way into the box to finish past Simon Mignolet.

Shelvey’s delight at scoring against his former club was short lived when his sloppy backpass two minutes later let in Daniel Sturridge to score his sixth goal of the season.

Victor Moses, on his debut for Liverpool following his season-long loan move from Chelsea, scored a delightful goal on 36 minutes to give the Reds the lead.

Swansea found an equaliser shortly into the second half when Shelvey headed down for Michu to strike expertly and low from the egde of the box.

Liverpool lost Philippe Coutinho in the second half – the Brazilian going off holding his shoulder after a challenge by Swans defender Ashley Williams.

Liverpool will feel disappointed they didn’t hold onto their lead, but did well to hold off a late surge of pressure from the Welsh side.

Brendan Rodgers’ men go back top of the league, one point clear of second place Arsenal with Southampton at home coming up on Saturday.