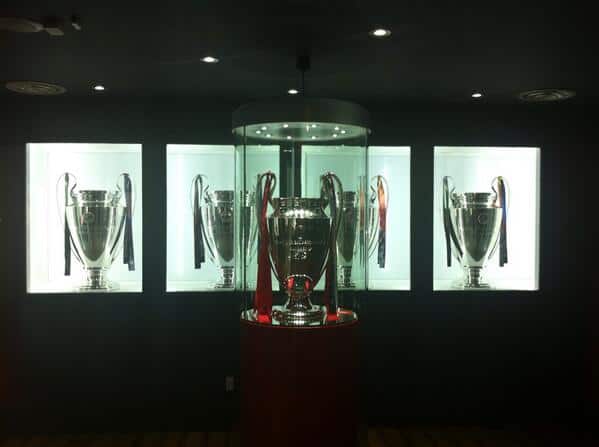 Liverpool Football Club opened it’s doors to the recently renovated club museum on Wednesday and kindly invited This Is Anfield along for the opening celebrations.

The evening allowed guests the opportunity to be amongst the first to take a walk around the memorabilia filled museum, still situated in the Kop stand at Anfield.

Brendan Rodgers was in attendance to welcome the opening, revealing that he took his family around the original museum on his arrival at the club last summer.

Rodgers also took a swipe back at Alex Ferguson’s recent comments that Liverpool still need 8 new players to challenge for the Premier League: “We’ve made a good start… considering we need 8 players to win the League!”

The new museum allows visitors to be given an audio guide around the museum from former club captain and legend of the city, Phil Thompson, who was also in attendance on Wednesday night.

Using Android technology, visitors are equipped with a touch-screen device and headphones to pull up photographs and narrative from Thompson as he takes fans through the museum and the history of the club.

There’s the opportunity to see all 5 European Cups that the club has won, and have your photo taken with it too – superimposed onto a background of your choice; Anfield, the dressing room, or holding the trophy with a current first-team player.

The recent Womens’ Super League trophy is also in the museum, as well as shirts, scarves, turnstiles, models, timelines and fashion taking visitors through the years of one of the world’s most famous clubs.

The new museum also does it’s best to connect visitors to the city, with Thompson explaining the importance of the relationship between the city of Liverpool and the football club on the audio guide.

Thank you to Liverpool Football Club for inviting us to attend the opening evening.