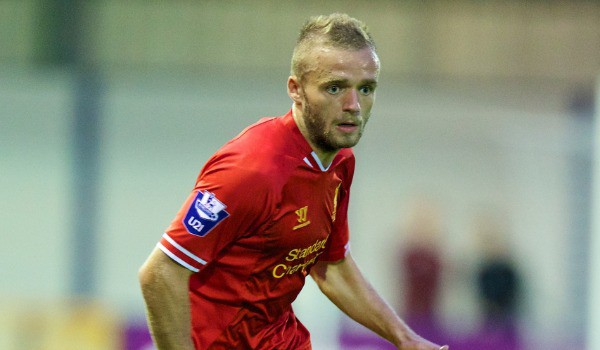 Ryan McLaughlin: Next to make it at Liverpool FC?

Could young Northern Irishman Ryan McLaughlin be the next player to make the step up from the academy into Liverpool’s first-team squad? @whatahitsonlfc thinks he already should be.

Last summer, in Brendan Rodgers’ second game as manager of Liverpool, Ryan McLaughlin lined up for the Reds against Roma in a friendly at the prodigious Fenway Park.

439 days later (last Monday to be less precise), having not since made an appearance for the Reds’ senior side (non-competitive matches included), McLaughlin, who recently turned 19, capped an impressive performance by scoring and assisting a goal for Liverpool Under-21s in their 5-0 win over Spurs.

A pacy attacking right-back by trade, Under-21s’ coach Alex Inglethorpe sprung a tactical surprise by deploying McLaughlin in a left-inside-forward role from the start. It allowed the tricky Northern Irishman to affect the game centrally; running inside diagonally and directly on his preferred right foot at the opposing defence.

Although the entire Liverpool side excelled throughout the game, McLaughlin stood out in my opinion: something he has done near enough every time I have seen him play for the Under-21s or 18s. So why is he yet to be selected, competitively, for the Reds’ senior side, or even figure in a match-day squad?

The simple answer is I don’t know. And rather than try to offer a hollow explanation, I’m going to bemoan his lack of opportunities.

This time last year, Raheem Sterling, Suso and Andre Wisdom – aged 17, 18 and 19 at the time – had racked up 10 starts in Liverpool’s opening seven 2012/13 Premier League games between them. This season the trio, combined, have started just two of the Reds’ opening seven league matches, with Suso sent out on loan to La Liga’s Almeria to get playing time.

Did Liverpool’s rocky start to last campaign sap manager Brendan Rodgers’ faith in the club’s young talent? Or rather less cynically, has the Reds’ deeper senior squad caused a decrease in reliance on youth?

For me it’s a combination of the two; Rodgers and his recruitment team have worked hard to put meat on the bones, so to speak, of Liverpool’s squad, but there’s a fine line between siding with senior players and being overly cautious with youngsters. It’s a line that, in my opinion, the manager is towing perilously in regards to Ryan McLaughlin.

So whilst being fairly understanding of Brendan Rodgers’ desire to build a broader, more experienced squad and rely less on Academy prospects, why am I so adamant in my advocation of a senior opportunity for the 19-year-old?

Well, in my opinion, the last month or so has been the ideal time for McLaughlin to have been given his chance. Since Glen Johnson got injured against Manchester United, four players have been selected at right-back or right-wing-back for Liverpool – Andre Wisdom, Kolo Toure, Jordan Henderson and Raheem Sterling – all of whom are better suited to other positions.

The Reds have been yearning for an attacking right-back, who is naturally suited to the role. But, despite the ideal candidate being right under his nose, Brendan Rodgers has uncharacteristically taken the pragmatic measure of reshuffling his senior players’ positions in an attempt to combat Johnson’s absence.

Liverpool’s last two league fixtures have also been against teams currently struggling and subsequently sitting in the bottom three of the division, which would have offered a chance to ease McLaughlin into first-team action, perhaps lessening pressure and defensive responsibilities.

The most significant point I’d like to make about the Belfast-born 19-year-old, though, is that contrastingly to right-backs from the club’s Academy who have previously been handed a first-team opportunity (Jon Flanagan and the aforementioned Wisdom), McLaughlin seamlessly suits Brendan Rodgers’ fluid, possession-based footballing philosophy.

The Reds’ manager last season described Jamie Carragher as “a pure defender”, and I’d say the likes of Flanagan and Wisdom fall closer to that description than the marauding, technical species of full-backs that unequivocally befit our system more effectively.

Appropriately, back in 2011, McLaughlin explained how he models his game on arguably the best attacking full-back in world football, Dani Alves. “Everyone knows how good he is going forward but that guy can defend too,” the Northern Irishman remarked. “You can see that when he goes up against Ronaldo at Real Madrid. I watch him to try and pick up bits because I rate him as the complete right-back.”

At McLaughlin’s age, Alves was easing his way into Sevilla’s senior team, after being trusted with an initial opportunity. Whilst displacing Glen Johnson in Liverpool’s first-team is currently highly unlikely, I’d like to see McLaughlin ahead of names like Wisdom, Toure, Henderson and Sterling in the right-back/right-wing-back pecking order; the 19-year-old Northern Irishman is a natural in the positions at least!