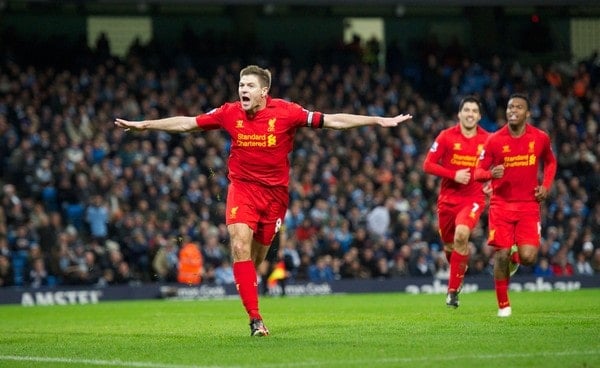 Steven Gerrard became the 24th player in Premier League history to score 100 goals on Saturday, the captain has scored some stunning goals in his career, but which have been his best? Henry Jackson picks his top 10. The skipper’s first Liverpool goal was a peach. At just 19 years of age, Gerrard showed his confidence and ability to weave past the challenges of a number of Sheffield Wednesday defenders, including former England international Des Walker, before stroking the ball home. A star was born at Anfield, and he has never looked back since.

It may not be one of his best ever strikes, but for pure emotion and importance it’s up there with Gerrard’s best. The visit of United is always a huge occasion, but on a day when the Hillsborough victims and families were remembered it was fitting that the captain, who lost his cousin to the 1989 tragedy, found the back of the net. His close-range volley was expertly taken with the Reds down to 10 men, and although they eventually lost the game it was still an unforgettable moment in front of the Kop.

This was Gerrard at his marauding, unstoppable best. Running onto a Danny Murphy pass on the halfway line, the midfielder burst past Spurs defender Ben Thatcher at electrifying pace, before firing a great shot past Kasey Keller. The 82nd minute goal put the Reds 3-1 up, and although the home side got one back it was still the pivotal moment in a 3-2 win. The 2002/03 season had its low points for Gerrard, but at this point he has responded brilliantly after criticism from manager Gerard Houllier.

Since Gerrard has deployed a deeper role in recent years, the number of spectacular strikes he has produced have dried up somewhat. His goal earlier this year at The Etihad rolled back the years, however.. With the scores level at the home of Roberto Mancini’s champions, the ball fell to Gerrard 25 yards out, and the Reds legend thundered in a trademark strike past England teammate Joe Hart. It sent the travelling supporters into delirium behind the goal.

With Gerrard now establishing himself as a first team regular at the turn of the century, he scored Liverpool’s first goal of 2001 with one of the best goals of his career. Collecting the ball in the middle of an awful Anfield pitch, the youngster fired an superb strike in off the underside of the bar in front of the Kop, giving Saints keeper Paul Jones absolutely no chance.

Gerrard was at the absolute peak of his powers when the Reds faced Villa towards the end of the 2005/06 season, with his FA Cup Final masterclass just a few weeks away. By this stage of his career he could already have released a DVD of his best goals, despite still just being in his mid 20s, and this was one of the best. Fernando Morientes found the skipper 30 years out, slightly right of centre, and he thundered a wonderful effort in the top corner to send Anfield into raptures.

Gerrard has had a fantastic time of it in Merseyside derbies over the years, scoring eight times for the Reds against their local rivals. His goal, and subsequent celebration, back in 2001 remains arguably his most iconic derby goal. With his side 1-0 down to an early Kevin Campbell strike Gerrard, then still only 21, picked up the ball from a loose Everton header, shimmied to the right before firing a remarkable effort back across goal into the far corner. He ran down the entire touchline in front of the Goodison faithful with his tongue out, goading them, before celebrating in front of the Liverpool fans. They went on to win 3-1, and Gerrard was the catalyst in the victory.

The opening day of the season is always a special one, and getting of to a winning start can give a side huge momentum early on in the campaign. The Reds looked to have got just that, only for Gareth Barry’s late penalty to level matters. With the game now in its dying moments, Gerrard won a free-kick. He took it himself, and bent a sensational strike right into the top corner of the Villa Park net. It was a massive goal and one that, yet again, outlined just how crucial the Englishman was to Liverpool’s chances of success.

The Reds were just a month away from the greatest night in their history- the epic, Gerrard-inspired Champions League Final victory over Milan- when the skipper produced yet another moment of individual brilliance. With Boro surprisingly 1-0 up, he took a ball down on the chest from way out towards the right hand side of the pitch, and hit an unbelievable half-volley that sailed into the far left-hand corner of the Kop goal. He was the only player on the pitch capable of producing such a moment on the day, and again Liverpool had their captain to thank for saving them in a crisis.

It just had to be a goal against Sir Alex Ferguson’s men, didn’t it? Liverpool’s cup treble-winning season in 2000/01 was hugely impressive, but in March 2001 they faced a formidable United at Anfield, with many tipping the visitors to win. Gerrard had other ideas, however. Fabien Barthez’s poor goal kick eventually fell to the young Scouser via Robbie Fowler, who hit the shot of a lifetime past Barthez at the Anfield Road End. It was, in this writer’s opinion, the best goal of his Premier League career. He went on to set up Fowler to complete a terrific 2-0 win.

What’s your favourite Gerrard Premier League goal? Let us know in the comments below.