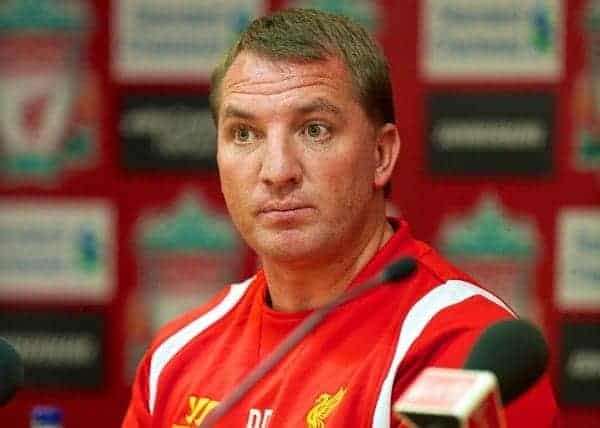 In the final part of his four part series this week on This Is Anfield, Romanian writer Alex Irimia charts the progress of Liverpool boss Brendan Rodgers in his first year and a half at the club.

I must say I’m a big fan of the general approach of Brendan Rodgers when addressing the media. As expected from an intelligent sports manager, he has an extremely positive attitude towards his players when talking to the press.

This approach has attracted the criticism and even the spite of some fans, who see in it a damaging way to refer to your players, as a false feedback or even a way to unjustly fuel their pride and drive them into complacency.

But those people forget the simple fact that player assessment is a ritual to be performed only in a tête-à-tête between the manager and the player and not during press conferences.

Words that get from the manager to a player through a media channel can carry an overwhelming weight and can seriously damage not only the self-confidence of the athlete, but also the respect and the trust he had for his boss.

We can’t deny that there are managers out there who find it fit to scold their players out in the open, whenever they find the urge to do it, but with a little bit of common sense anyone can understand how that is a grave mistake.

Every smart manager knows the difference between what to say in front of the cameras and microphones and what must be said behind closed doors.

Last but not least, it must be said that Brendan Rodgers has a very dynamic approach on managing and training. That has been highlighted by the constant changing of the formation this season to cover for injuries, to accommodate key players or get the maximum from others.

We have seen no less than four different formations in 12 games so far, some of them representing variations of a system that hasn’t been used for almost 20 years in English football. That illustrates the lengths the boss will go to find his answers.

Rodgers looks more and more like a person willing to get out of his comfort zone in the never-ending evolution process, seeming to fully understand the main principle that governs the people’s world – “adapt or die”.

And although he was invested with absolute powers by the owners, Brendan Rodgers proved to be the opposite of a control freak when he decided to create the transfer committee to handle the scouting department as well as the transfers per say.

Of course that the boss has a final word in the whole transfer business, but to admit the limitation of time and other resources the manager’s job comes with and that six heads can think clearer than just your own is a clear  proof of wisdom.

I must say that I am still trying to figure out what is Rodgers’ approach on making substitutes during a match.

Apart from against Fulham, when I was totally contempt with his decisions, he failed to utilise all three changes, ignoring the chance of bringing fresh legs in or giving a real chance to the understudies or the youngsters from a sub appearance.

Apart from this concern, there are still many things to be discovered about Brendan Rodgers.

One such thing would be his ability to cope with the thin air and the pressure at the summit of the League.

It is true that so far, 12 games into the season, he managed to keep the club within arm length to the top, but somehow it is almost generally accepted that the league position can’t be that relevant until that decisive December. Come New Year, the stats will show a more close-to-reality situation.