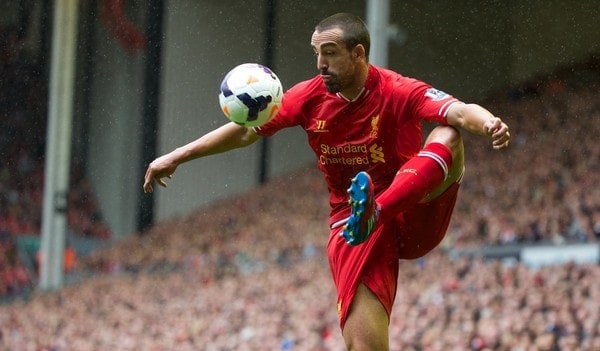 Liverpool have today confirmed that left-back Jose Enrique faces 10 weeks on the sidelines after undergoing a knee operation.

The Frenchman was signed on loan this summer for exactly this reason – to provide cover for Enrique. However, he’s been far from impressive in his five Premier League appearances so far. He’s been subbed in each of his last two starts, including at half-time against Arsenal.

The fact he wasn’t in the matchday squad and Flanagan was given the nod ahead of him for the derby seems to be a huge signal that Rodgers isn’t impressed.

2. Give Jon Flanagan an extended run

Flanagan, despite being a natural right-back – although he has appeared at left-back for the under 21s this season – was hugely impressive against Everton.

Both Rodgers and Gerrard have heaped praise on the local lad. It only seems fair he’s given a chance to continue in the next game agains Hull on Sunday.

Another option is to do what Kenny Dalglish did by moving Johnson across to left-back. The right-back position then being between Flanagan, Martin Kelly or even young Ryan McLaughlin.

The only other ‘natural’ left-back in Liverpool’s senior squad is Robinson, currently out on a season-loan to Blackpool. He has been a regular for Paul Ince’s side, well, until his second sending off in 13 appearances against Blackburn recently.

However, rules regarding season-long loans that have a fee involved mean clubs cannot recall a player. It’s not clear whether Robinson’s involves a fee. Either way, it’s unlikely Rodgers would choose this option if it were available to him anyway.

This seems likely no matter who gets the nod at left-back in the meantime. It’s clearly a problem area and Enrique’s injury-proneness expedites the need.

German Dennis Aago was linked by Bild recently, while there are sure to be plenty of targets. Can the club finally solve the problematic left-back area after years of trying?

Which one would you choose? Let us know in the comments below.