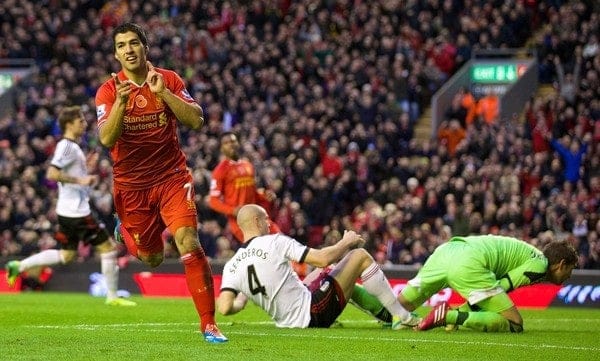 Liverpool were at their attacking best to completely dominate a fragile Fulham side and inflict a second consecutive 4-0 defeat on The Cottagers at Anfield. Liverpool – and captain Steven Gerrard in particular – bounced back from defeat at Arsenal by ruthlessly seeing off Fulham courtesy of some excellent attacking play.

Brendan Rodgers opted to change the shape of his side, returning a back four and recalling Daniel Agger; while also having the rare luxury of having all his attacking quarter of Gerrard, Philippe Coutinho, Luis Suarez and Daniel Sturridge available.

Gerrard set-up the first two, both from excellent deliveries; the first an own goal by Amorebieta at the near post, the second a powerful header from centre back Martin Skrtel.

Suarez made it three, tucking away a superb through-ball from the ever-impressive Jordan Henderson.

And Suarez scored his eighth goal of the season to take him level on goals with Sturridge and Sergio Aguero as the Premier League‘s top goalscorer – despite missing the opening five games!

Liverpool controlled the game from start to finish, creating more chances and pressing high up the pitch. They had 68% of possession and a record for this season in the League of 32 shots.

In these types of home games we’re starting to see “death by football”.

Amorebieta Own Goal vs Liverpool by LFCmostar

It’s another international break now — then the small matter of a Merseyside derby!