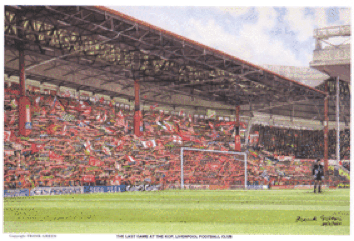 Liverpool artist Frank Green’s iconic watercolour painting of ‘The Last Game at the Kop’ goes on auction on Wednesday. Here, Frank shares with us some his own personal, abiding memories of the old Spion Kop.

Not being a tall person, most of my memories of being in the Kop were of trying to see the action when Liverpool were attacking the Kop end.

As now, if Liverpool win the toss they choose to attack the Anfield Road end in the first half, and the Kop in the second half. This gives them a huge help if they are not playing well.

If it was an important game and the Kop was full to capacity there was a lot of swaying with fans trying to retain their footing. It was a constant battle not go down on your knees with people almost climbing on your shoulders to get a better view.

If possible we’d get there early and get in front of one of the barriers which was safer. Everybody had their favourite spot.

One match in the sixties against against Wolves. I was by myself, and when I turned around I saw John Meekin, and his wife Gilda. John had been a model at the College of Art and Gilda a fellow student of mine.

Liverpool scored and I turned round to say what a fantastic goal it was only to find that Gilda and John were locked in a passionate embrace. They were roundly cheered by the surrounding Kopites.

Liverpool went on to score five or six including an incredible volley by Ron Yeates which nearly brought the goal down, and every goal brought the same passionate embrace from the two them.

They were completely unphased by the whole thing and later on ran famous Liverpool pubs such as Peter Cavanagh’s and the Baltic Fleet, the Jack O’Randa Club in Slater Street and John became a familiar figure around Liverpool.

The famous own goal by Leeds United’s goalie Garry Sprake, I saw from the paddock.

It was just before half-time, and he picked the ball up and was going to bowl it out overhand to a colleague when at the last split second, in full throwing motion, he kept hold of the ball and brought his arm down, letting the ball slip into his own net.

Whoever worked the LFC public address system as quick as a flash had ‘Careless Hands’ by Des O’Connor on the turn-table.The whole Kop sang along appreciating the disc jockeys quick humour.

The Kop at that time was 100% Liverpudlian, and had that famous Liverpool wit which came to the fore especially in those famous European games.

I often thought that the managers under-estimated the football shrewdness and possessed by the crowd who knew what the best team was and who could make a difference to the play.

Often they would bay for that player to be brought on. They were often proved right.

David Fairclough was such a player who should have figured much bigger at Liverpool and scored many more goals if he hadn’t always been ‘super-sub’.

The changes to the Kop, although inevitable, reduced the number of Liverpudlians who could afford the new prices, and is now not the same spectacle it once was.

Once, the Kop was populated by Liverpool Dockers and workmen who worked half day Saturday, and travelled to watch Liverpool by tram, bus and bike.

Many would have a skin full of ale in the local pubs before getting in late through the turnstiles.

After a few minutes it was inevitable that they would have to empty their bladders,and so they would either go to the top of the Kop to urinate or wee through a rolled up newspaper.

There would be river of urine flowing down the Kop terraces soaking everybody’s shoes right to the edge of the pitch. Some unlucky people actually got soaked from the person behind them who was either too drunk or too lazy to push his way to the toilet, causing inevitable fights and arguments.

Your shoes dried with a white salt ring around the bottoms.

A friend of mine’s dad pretended to faint during the record crowd match in 1948 against Wolves. The crush being so great that he was passed out over peoples heads down to the pitch, and was able to make his way home.

The original watercolour of ‘The Last Game at the Kop’ by Frank Green to be auctioned at Bonhams Chester on Wednesday, 6th November 2013. Bidding starts at 11am. Contact Chris Hayes at Bonhams on +44 1244 353117 or email: christopher.hayes@bonhams.com