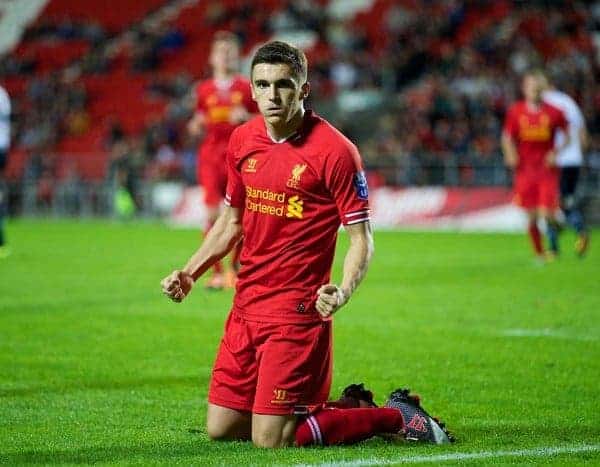 Liverpool have allowed striker Adam Morgan and midfielder Craig Roddan to leave on loan with immediate effect, with reports suggesting both will be made permanent in January. Today is the deadline for loan deals for Football League sides and Liverpool are allowing several youngsters to leave to gain experience.

19 year-old Morgan has joined Championship side Yeovil Town on loan, with a view to making the move permanent when the transfer window reopens in January, according to the Daily Mail.

Morgan made three appearances early on last season during the Reds striker shortage, starting the Europa League games with Hearts and Anzhi. He made headlines earlier this season when he scored from 40 yards out for the under 21s.

Just last week, reports suggested Morgan would be allowed to leave the club on a free transfer, with forwards Samed Yesil and Michael Ngoo preferred in the Liverpool Under-21 set-up. Meanwhile, Roddan has joined Carlisle United, according to the BBC, where he has been training recently, initially until 1 January, but a permanent move is expected for the 20-year-old.

Carlisle boss Graham Kavanagh was delighted to recruit Roddan to the League One side.

“I’m very happy. Craig is a player I have watched a lot and he has a huge amount of potential,” Kavanagh told the official Carlisle United website.

“Hopefully he’ll get up to speed as quickly. He played really well in the game we won against Rangers last month.

“It’s an initial one-month spell and things could develop further once we get into the January transfer window.”

The departure of two more young players from Liverpool’s youth set-up will continue to ask questions of the current set-up.

Update: BBC Radio Merseyside report that another academy player is to head out on loan. Winger Kristoffer Peterson joining Merseyside neighbours Tranmere on a month deal.

Liverpool now have 13 players out on loan this season.

In the last week, Michael Sweeting has looked at the future of Liverpool’s Academy, and PJ Vaughn has countered by looking at how to system does not work.

Earlier this month, we compiled a list of five Liverpool players who could benefit from a loan move in January. You can read the list here.