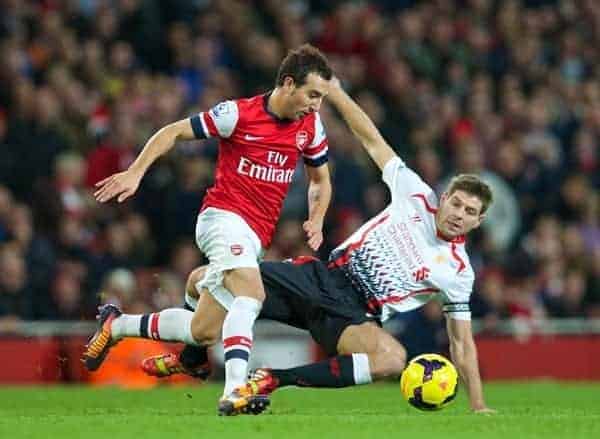 Liverpool could be without Steven Gerrard for Saturday’s Premier League clash against Fulham after the midfielder took a knock to his hip. The Reds skipper sustained the injury in the second half of Liverpool’s 2-0 defeat to Arsenal at the Emirates Stadium on Saturday.

Brendan Rodgers admitted later that he didn’t know about the injury at the time, and that assessments were still ongoing to decide Gerrard’s eligibility for the weekend’s visit from Martin Jol’s Fulham.

The Reds will be looking to get their Premier League season back on track – you can check out the latest odds at the online sportsbook as Liverpool look to take three points.

Rodgers is quoted in the Daily Star as saying, “He took a knock towards the end, with his hip.

“I’m not sure the complete diagnosis on it.

“Stevie’s been brilliant for me, it was a tough game for him, but we’ll assess his injury and see where he’s at.

“Roy (Hodgson) has always handled Stevie really well, both when he was Liverpool manager and now the player is England captain, so I’m sure that will be fine.”

Should Gerrard miss the game at Anfield on Saturday, it will be interesting to see how Rodgers covers him.

Joe Allen watched on from the bench against Arsenal as Liverpool’s midfield pairing of Gerrard and Lucas Leiva delivered an under-par performance.

Gerrard’s injury is the latest in a running line of problems for Liverpool, having lost the likes of Allen, Aly Cissokho, Philippe Coutinho, Glen Johnson and Daniel Agger for large periods of the season so far.

Liverpool vs Fulham gets underway at 3pm on Saturday, 9th November 2013. Stay tuned to This Is Anfield this week for pre-match build-up, previews and team news.