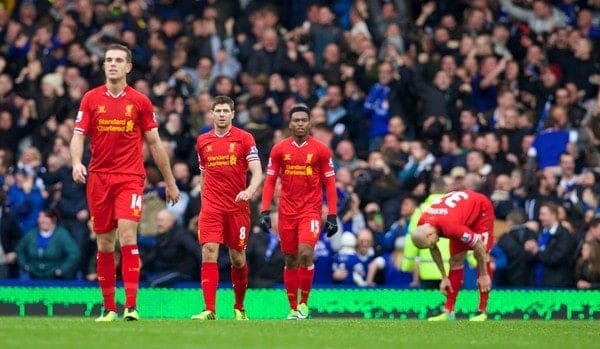 Some superb individual performances today from Liverpool as they drew 3-3 with Everton at Goodison Park, but who gets your pick? In a game of furious game of football, the local rivals shared the points in a six-goal thriller. Daniel Sturridge rescued a late equaliser for the Reds.

Watch all the Liverpool goals from today’s game here.

Simon Mignolet pulled off a number of important saves to keep Everton at bay, but will feel agreieved at conceding three goals from set-pieces.

Steven Gerrard had a slow start to the game, but found his feet, playing shorter passes with the added support of Joe Allen in midfield.

Luis Suarez looked hungry all game, despite being kicked all over the pitch by Everton players, whilst Jon Flanagan had another very sound game.

Vote for your Liverpool man of the match in the exciting Merseyside Derby below: