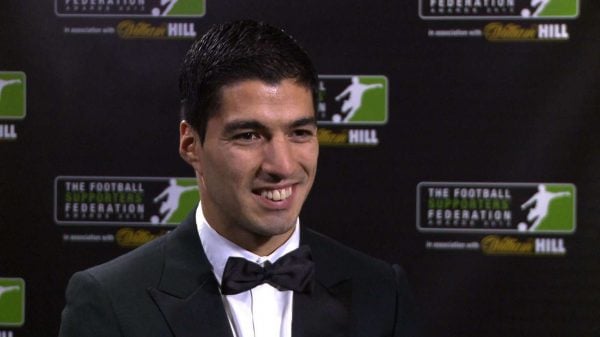 Luis Suarez was awarded the Football Supporters’ Federation Player of the Year last night at a glitzy award ceremony in North London.

Suarez was one of few players who turned out for the event at Arsenal‘s Emirates Stadium to accept his award and speak to fans and media.

Henry Winter of the Telegraph, who was awarded the Football Writer of the Year award, wrote how he felt humbled by the Uruguayan international’s appearance:

Suárez must have felt after all the criticism he has received that this was a night of acceptance, of redemption.

Mind you, Mr. Winter, maybe it was a night for redemption for more than one person. This is the same writer who labelled Suarez a “toxic cheat” in the summer, but cosied up for photographs to share the night with the 26-year-old anyway.

Did you call him a toxic cheat tonight @henrywinter?

Even if some allowance is made for Liverpool fans’ noted assiduousness in campaigning, Suárez’s success also highlights further the forgiveness of the football fan. He caused brief outrage when attempting to leave Anfield in the summer.

After a controversial year for Suarez, he accepted the award and gave thanks to Liverpool fans for welcoming him back at Anfield with open arms following a long-term suspension.

He is quoted by Sporting Life as saying, “After so many difficult moments for me I was able to win the supporters back, and that was unbelievable when I came back to play.

“They helped me, and that was important for me, for my confidence, and for my family, because they are together with me in this.

“It’s very special for me (the award) because my hard work on the pitch is recognised.

“Everybody knows about my problems and my difficult year, but after that I forgot everything and have been able to get back on the pitch.”

Suarez is now the league’s top scorer this season with 17 goals in just 11 appearances, and Liverpool can go top of the table with a win at home to Cardiff City next Saturday.

Asked about Liverpool’s title chances, Suarez added, “Liverpool are starting to reach their potential and we can play our best on the pitch.

“If Liverpool don’t have these players I cannot continue my level, because it’s too much.