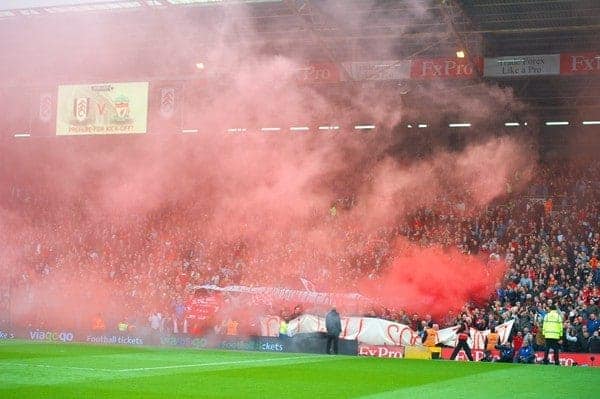 “Childish” or “Nanny State Nonsense”? Fans react to ‘dangers of pyro’ in stadiums

Liverpool and football fans have taken to Twitter to respond to a new government-backed campaign to prevent flares and pyrotechnics in British football stadiums. A report by David Ornstein for the BBC today suggests the rise in pyro returning to British football grounds his causing growing concern:

Children as young as eight are being used as “mules” to smuggle flares and smoke bombs into Premier League matches, according to new research.

A survey found a third of supporters have been directly affected by pyrotechnics at a stadium and that 86% are concerned for their safety.

Liverpool are among nine Football League clubs who’s fans have been involved in four or more incidents with flares this season, according to the UK Policing Unit.

Ornstein continues in his article:

The Premier League-commissioned survey of 1,635 supporters found more than half of fans had witnessed pyrotechnics at a match, 24% had had their view obscured, 10% had suffered from smoke inhalation and 2% had been affected by heat from a flare.

The argument for the use of pyro at football matches is increased atmosphere – a ‘football is meant to be fun’ attitude.

So where do you stand on it? Here are a selection of Liverpool and football fans’ views on the subject. We’d love to hear yours too, in the comments below, or on Twitter @thisisanfield.

@thisisanfield I agree though, people on here seem to think its wonderful and funny but it isn't! It's dangerous and childish!

@thisisanfield amazing the lengths people will go to, to potentially hurt others. Shocking.

@thisisanfield real problem is lumping everyone in together. Families wi hardcore fans don't mix.Doesn't happen on continent,shouldn't in UK

I'm all for the use of pyro at the game, I just wouldn't run the risk of doing it myself. I don't see the point in getting nicked for it.

When the Premier League talk about education, do they really mean demonise? Pyro is illegal and needs to be addressed but better ways. And these from non-Liverpool football fans:

Has anybody ever been killed or maimed by a pyro at a match?!? Footballs on it's arse. Pricks!

These Mongs on Ssn. Who cares about pyro.. Don't take your kids to Awaydays sit in the family section simple

Better have a pyro at the game tomorrow … Set it off and throw it at Moyes big ginger bonse.. #EFC