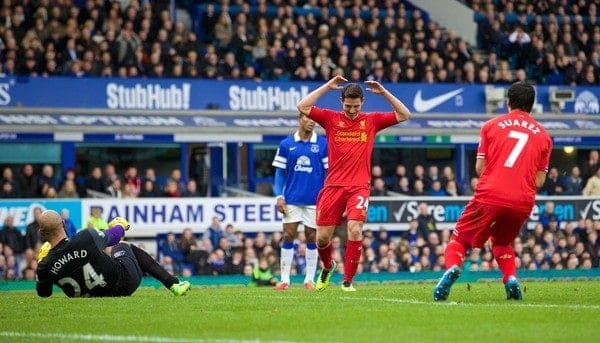 Joe Allen has spoken about how missing a golden opportunity to score against Everton last month spurred him on to reclaim his place in the first-team.

Allen started Liverpool’s last two games at home to Norwich and West Ham, bouncing back from an embarrassing second half miss in front of goal in November’s Merseyside Derby at Goodison Park.

In the latter game especially, Allen silenced his critics, with a superb, energetic performance, moving and distributing the ball all over the pitch.

Really impressed by Joe Allen today. One of his best performances for the club.

“Everyone knows the disappointment and there’s been a lot of talk about the miss,” Allen told the club’s official website.

“It was disappointing, but that’s football and these things happen. I moved on straight away and got back to working hard, looking for the next opportunity to come.

“Obviously I had the chance to start against Norwich, which was the first start I’ve had at Anfield in the league for almost a year. So it was great to be back out there and be a part of a winning performance.

“I’ve struggled with different injury problems, but you’d hope that they’re behind me now and I can focus on getting out there and playing more and more.

The Welsh international now looks set to start a few more games, with Steven Gerrard ruled out of action for up to six weeks with a hamstring injury.

Allen added, “The manager has just told me to be ready for when my opportunity comes and to get back to my best. That will come with game time. Nothing has changed really.

“But everything comes together with playing time, so I’m looking to getting a string of games and showing what I can do.”