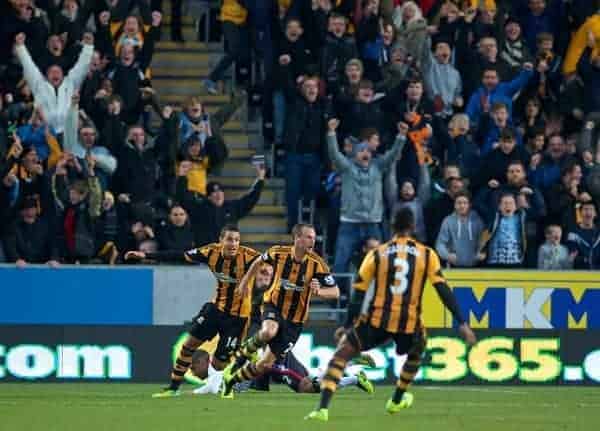 Liverpool fans have taken to social media to express their display at the Reds’ performance against Hull City on Sunday afternoon which saw them slip to a 3-1 defeat at the KC Stadium. The Reds never seemed to find any attacking creativity as they stumbled against Steve Bruce’s men.

Many fans took to blaming Brendan Rodgers, whilst some realised the club are still very much in a re-building stage and good early season form has spoilt many.

The result means Liverpool slip to fourth in the Premier League table, following victories for both Chelsea and Manchester City later on Sunday afternoon.

Here are just a selection of tweets from Liverpool fans following yesterday’s defeat:

Still can't get over the LFC loss vs Hull. You NEED to pull off points against sides like these – often the points that cost a CL place."

Rodgers has been off the mark with selection two weeks running, but the tirade of criticism when I logged on was completely unfounded.

Rodgers complained about depth, look at Hull's team. We just didn't play, we were practically giving the ball to them.

Rodgers receiving a bit of stick tonight. Will be interesting to see how he responds on Wednesday

Love it when we concede 6 goals in two games. Rodgers doesn't have a clue who is best centre halfs are

Did Fergie have a point when he said we're eight players short? #strenganddepth

I'll get shouted at for this – but either #LFC buy another RCB or Sakho gets trained into the position alongside Agger.

Dreadful performance. No sense of urgency to our play & couldn't string 2 passes together. Very costly defeat, Hull wanted it more.

Positives: Gerrard's freekick was nice. Negatives: Everything else.