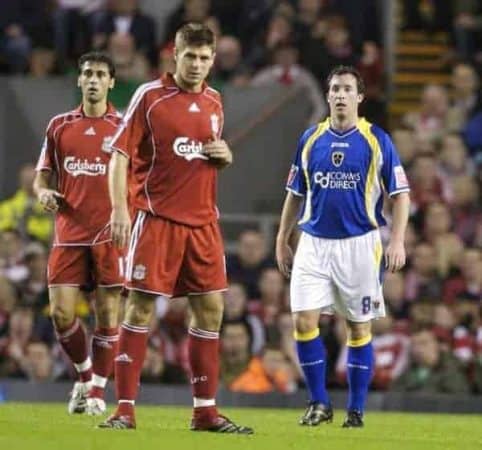 The Welsh side travelled to Merseyside for a 4th Round Carling Cup clash back in 2007. Henry Jackson (@OnFootballTweet) takes a trip down memory lane to revisit that game from six years ago.

Steven Gerrard was yet again the hero on the night, scoring the winner against Dave Jones’ dangerous Cardiff side. It was an evening that also saw a former Reds legend return to Anfield.

Liverpool boss Rafa Benitez made changes to his side, following a gruelling 1-1 draw with Arsenal at Anfield the previous weekend, bringing fringe players like Nabil El Zhar and Sebastian Leto into the team.

A huge amount of focus before the game was on Robbie Fowler’s return to Anfield. ‘God’ had finished his second spell at the club in the summer of 2007, finishing his Reds career with 183 goals. His name was sung all night by the Liverpool faithful.

The 32-year-old almost had a dream moment in front of the Kop early on, but his curling free-kick was well saved by stand-in goalkeeper Charles Itandje.

The Reds had plenty of chances to open the scoring, before El Zhar scored in stunning fashion. The Moroccan youngster fired an unstoppable effort in off the post in the 48th minute, giving Liverpool a deserved lead against the Championship side.

Midway through the second half, however, Cardiff were level. Darren Purse, who had scored a late penalty for Birmingham against the Reds in the 2001 Worthington Cup Final, met Paul Parry’s delivery with a fine header to stun the hosts.

Just a minute later Liverpool were back in front, and it was Gerrard who, inevitably, came to his side’s rescue once again. The 27-year-old skipper neatly exchanged passes with substitute Yossi Benayoun before firing a fine effort past Mike Oakes.

Benitez’s men had the chance to the put the game to bed, with Peter Crouch denied well by Oakes, before Fowler saw his late effort blocked. Parry’s last minute strike was also stopped by a Reds player, and it would be Cardiff’s final chance in a pulsating Cup tie.

Liverpool were knocked out in the next round by Chelsea, following a 2-0 defeat at Stamford Bridge, and were eliminated by the same side in the Champions League semi-finals that season as well.

Cardiff, meanwhile, reached the FA Cup Final, losing 1-0 to Portsmouth in the showcase event at Wembley.