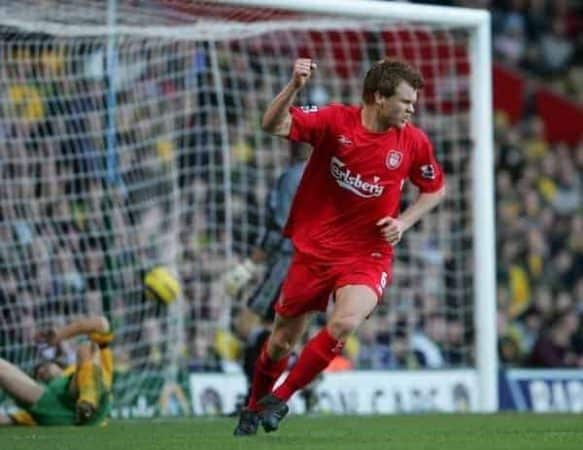 Liverpool vs Norwich: Down The Years – Kop’s last stand to the Magnificent Suarez

Liverpool entertain Norwich at Anfield on Wednesday, knowing that all three points are vital after Sunday’s loss to Hull. Henry Jackson (@OnFootballTweet) looks back at some classic games between the two sides in the Premier League era.

This game signalled the final time fans on the Kop were able to stand, and the day was meant to be a celebratory one at Anfield. Instead, it was the Canaries who came away with the win on the day.

Norwich manager John Deehan requested the Reds shoot towards the world-famous stand in the second half, in what was a very sporting gesture, but on the day it was a visiting player who became the final player to score in front of it.

Welshman Jeremy Goss scored with a terrific strike in the first half to earn his side all three points, and it remains the last time they won at Anfield.

Rafa Benitez’s reign at Liverpool was in its infancy when Norwich visited back in 2004, and with star man Steven Gerrard sidelined through injury some thought Norwich could spring a surprise.

Instead, it was a comfortable afternoon for the Reds, with new Spanish acquisitions Xabi Alonso and Luis Garcia running the show.

Milan Baros fired in a long-range effort to open the scoring, before the excellent Garcia doubled the lead before the break. Another new signing, Djibril Cisse, fired home a third as the Reds responded perfectly to defeat by Manchester United four days earlier.

The Uruguayan was absolutely sensational on the day, scoring a hat-trick as Kenny Dalglish‘s side romped to victory at Carrow Road.

First, he pounced on Gerrard’s pass to curl a fine effort past John Ruddy, before firing an emphatic effort into the opposite corner just four minutes later. His third, scored late on, was extraordinary. Picking up the ball on the half-way line, Suarez chipped Ruddy from 45 yards, in what was one of the goals of the season.

Just five months after Suarez had tormented Norwich on their own turf, the brilliant striker repeated his heroics as Liverpool thumped Chris Hughton’s side.

Two typically lethal Suarez efforts put the Reds 2-0 up at the interval, and the second half was equally dominant. Nuri Sahin, in a rare positive moment in a Liverpool shirt, added a fourth before Suarez completed his second consecutive Carrow Road hat-trick with a sublime curled shot.

Leon Barnett’s own goal was sandwiched between strikes for Norwich by Steve Morison and Grant Holt, as Brendan Rodgers picked up a great win early in his tenure.

As most of the above results show, Liverpool have had great success against Norwich over the years, and the most recent meeting between the two was no different.

The first half burst into life in the 26th minute, as the much-maligned Jordan Henderson rifled home an unstoppable effort, before Norwich‘s nemesis Suarez doubled the lead with a tidy finish after an outrageous dummy by Daniel Sturridge.

Sturridge then got a third and Gerrard smashed home another, before Ryan Bennett turned Raheem Sterling’s cross into his own net. The rout was complete.

What are your favourite memories from Liverpool vs Norwich clashes? And what’s your prediction for Wednesday’s game?