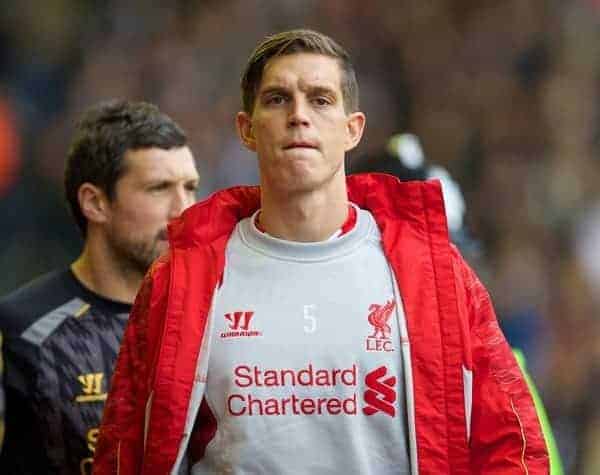 Rafa Benitez will attempt to take his former signing Daniel Agger on-loan to Napoli with him until the end of the season in the January transfer window, according to reports. Daniel Agger: A victim of the Liverpool FC pairing crisis?

Andy Hunter of the Guardian writes in Tuesday’s edition of the newspaper:

Representatives of the Italian club contacted Liverpool on Monday regarding a temporary deal for the 29-year-old when the transfer window reopens.

John Percy and Chris Bascombe write in the Telegraph:

Benítez, who tried to sign Martin Skrtel in the summer, will have noted Agger’s predicament and potential lack of first-team chances and made contact with the Merseyside club on Monday.

Agger has struggled to keep his place in the Liverpool side this season due to a succession of injuries, the resurgence in form of Martin Skrtel, and £18 million signing of French defender Mamadou Sakho.

Despite being made the club’s vice-captain in the summer, the Danish international has made just eight appearances in the league this season for Liverpool and was left out of the side for Sunday’s 5-0 victory over Tottenham at White Hart Lane. Benitez signed Agger for Liverpool from Brondby in 2006. Over the years, the now 29-year-old has often been linked with moves to some of Europe’s top clubs—namely Barcelona and Manchester City.

Should Agger leave to Napoli, he would team up with Liverpool’s on-loan goalkeeper Pepe Reina, whom he played with for seven years on Merseyside.

Important to stress Agger isn't looking to leave @LFC – in a recent interview he said if the club are happy with him he's happy to stay.

However, unless experienced cover is brought in for him, it is unlikely that Liverpool boss Brendan Rodgers will allow the Dane to leave on-loan.

Kolo Toure remains an option at centre-back for Liverpool, whilst Martin Kelly said last week that he also is fit to fight for a place in the team.

Would you allow Daniel Agger to leave on-loan for the rest of the season? Let us know your thoughts by voting in the poll below, and leaving your comments. You can also tweet us @thisisanfield