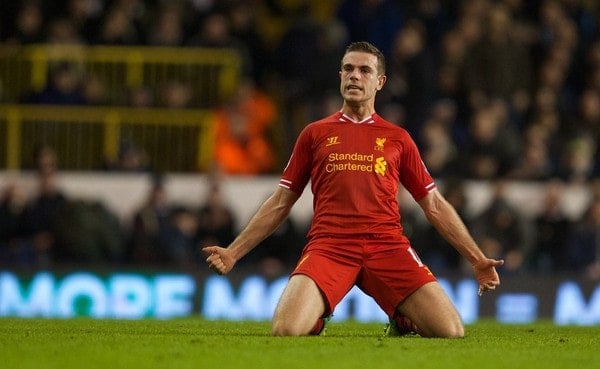 Expertly taken goals from Luis Suarez, Jordan Henderson, Jon Flanagan and Raheem Sterling swept aside Tottenham Hotspur 4-0 to send Liverpool back to second in the Premier League on Sunday afternoon.

With Steven Gerrard injured, Lucas came in to replace the Reds’ skipper, with Suarez taking up the captain’s armband.

Mamadou Sakho kept his place alongside Martin Skrtel in the centre of Liverpool’s defence.

Henderson and Suarez linked up for the first on 18 minutes when Henderson showed terrific workrate to play a lose ball on the edge of the area to the Uruguayan, who intelligently took the ball forward and finished past Hugo Lloris.

Henderson then got one himself shortly before half time, a succssion of shots from himself and Suarez being kept out, before he converted the hardest of the lot with a low volley.

After Spurs went down to ten men after Paulinho’s second half red card for a high foot on Suarez, Jon Flanagan found himself taking a half-volley, rattling the bar on it’s way in past Lloris. There was just enough time for Suarez to grab his second of the game — and 17th of the season — beautifully chipping the ball over the advancing Lloris when put through on goal by substitute Luis Alberto.

The result means Liverpool move back up to second in the Premier League, just two points off league leaders Arsenal.

A win at home to Cardiff City next Saturday (December 21) would send the Reds into first place, and if Arsenal weren’t to beat Chelsea two days later (December 23), Liverpool will be top at Christmas.

Liverpool also now boast the second-highest goal difference in the league, behind only Manchester City, after scoring 14 goals in their last three games.

Videos with thanks to @MostarLFC