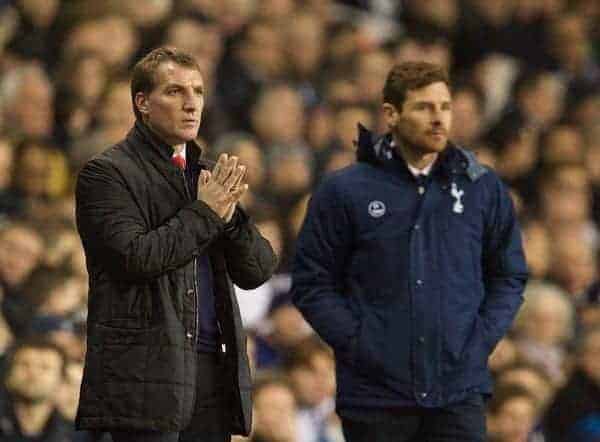 Jack Lusby explains how Brendan Rodgers got Liverpool’s trip to Tottenham on Sunday tactically spot on, and calls for optimistic caution going forward.

In a game where the team enjoyed almost wholesale dominance the Northern Irishman’s approach and philosophy seemed vindicated.

This result provides the perfect platform for the difficult weeks ahead: instilling a belief that Liverpool can not only perform away from home, but also do so in the bigger games.

This represents a growth in Brendan Rodgers’ tactical approach to games, and in this article I will look at how Rodgers got the big decisions right coming into this particular fixture.

Much has been made of Rodgers’ flirtation with several different defensive partnerships throughout this season, and with the projected return of Daniel Agger to the selection fold many would have assumed his inclusion was a given.

However, Rodgers stuck with the partnership of Martin Skrtel and Mamadou Sakho who performed so impressively during the previous weekend’s win over West Ham.

Martin Skrtel continued his resurgence following his Carragher-prompted exile from the first team fold last season with another dominant performance. Whilst Sakho, described as a “marquee signing” by Ian Ayre upon his arrival, has grown in stature since his shaky debut against Swansea.

The duo’s performance provided Liverpool with an assured presence amongst the back four.

Sakho in particular impressed as the hapless Spurs failed to manage a single shot on target. According to Squakwa, his average of 75% of duals won throughout the game came second only to the omnipresent Jordan Henderson.

With the pair repaying Rodgers’ faith, it seems that this decision was hugely successful, and may prove to be a platform for stability in the coming games in a tough December schedule.

In my pre-Spurs article ‘3 Options for Liverpool’s Gerrard-less Midfield’ I wrote about the problems Liverpool may face in replacing the previously ever-present captain.

The most likely option was the trio of Joe Allen, Lucas Leiva and Jordan Henderson, of which were likely to lack authority.

Brendan Rodgers plumped for the trio, and they showed authority in spades. Allen and Lucas, whilst impressive, were side-lined by the imperious Jordan Henderson.

In Gerrard’s absence, Henderson showed a mental growth to more than atone for the need for an authoritative voice in the centre. In an infographic produced by LFC’s Twitter account after the game, Henderson boasts a passing accuracy of over 92%, and a 100% tackling success.

For all the talk of a January reinforcement of the midfield, Rodgers may have a ready-made general in his midst.

With speculation rife in the latter half of the week that Daniel Agger would not be starting against Spurs, and with the obvious absence of Steven Gerrard to contend with, much debate was made of who would be appointed captain for this fixture.

Eventually, it was announced that Luis Suarez would captain the side.

Whilst it could’ve been argued that his past dalliances with bad behaviour should go against this decision, the Uruguayan repaid Rodgers’ choice with a true captain’s performance.

Continuing his rich vein of form, Suarez scored and provided with aplomb in the 5-0 mauling, with a hand in every goal.

His sumptuous lob over a stretched Hugo Lloris may be lauded as yet another goal of the season contender, but his assists were just as commendable.

Whilst in seasons previous, Luis Suarez could be criticised for having a measure of greed to his game, the way in which he found both Raheem Sterling and Jon Flanagan for their respective strikes displayed a growing maturity to the striker’s game.

Chasing another hat-trick, Suarez would’ve been forgiven for attempting shots, but his provision represents a flourishing team ethic.

This is something which Rodgers’ choice of captain emphasised in his post-match interview:

“It was no different, because for me, there is only one captain here at Liverpool and that is Stevie”

“[T]oday the most important thing was the performance of the team…when Flanno scored, it was a happy moment for us.”
(LiverpoolFC.com)

Whilst underplaying his own role as captain, the striker showed great maturity in his stressing of the result as a team effort. His singling out of Jon Flanagan for praise displays qualities of leadership and the paternal mentality required in a successful captaincy.

As Sakho and Skrtel have proved their worth as Liverpool’s bona fide centre back partnership, Suarez may enjoy a continued run as team captain in the absence of Agger and Gerrard.

Although it is right to revel in the joys of a significant win over one of their direct rivals, Liverpool must remain cautionary in the fixtures to come if they are to continue their impressive form.

For all of their dominance, Skrtel and Sakho were blessed with a baffling selection of Aaron Lennon and Nacer Chadli on the flanks serving to isolate the increasingly abject Roberto Soldado in attack.

Jordan Henderson’s best performance in a Liverpool shirt, impossible to detract from, was helped significantly by the early injury to Sandro and Paulinho’s red card.

Moreover, Étienne Capoue essentially handed Luis Suarez the reins with a spineless performance at the heart of the Spurs defence.

Cardiff, Manchester City and Chelsea may not roll over so easily, but for now this “most complete performance” is cause for much optimism.