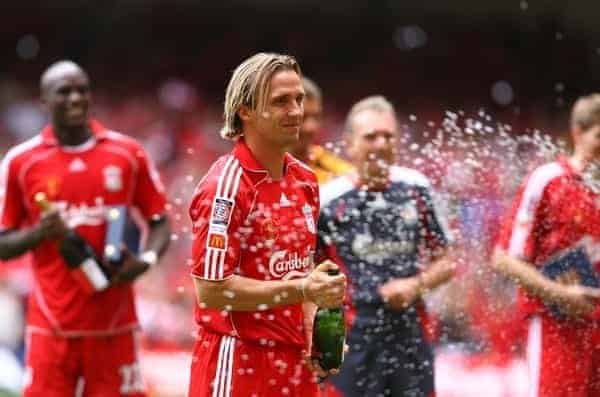 Ahead of this Sunday’s meeting at Stamford Bridge, Henry Jackson (@OnFootballTweet) takes a look at the five best players to have played for both Liverpool and Chelsea. Do you agree with his selections?

The Dutchman had a terrific career, representing Liverpool and Chelsea, as well as Holland and Barcelona. The midfielder was a key squad player for both English sides.

He joined the west London club in 2001, and spent two good years there under Claudio Ranieri. He was loaned out in his final season at the club.

Rafa Benitez signed him for Liverpool in 2005, and his two years at Anfield ended with him starting in the 2007 Champions League Final defeat to AC Milan. He was a very understated player by this point in his career, and did a lot of unnoticed, good work for the team.

The tricky Israeli winger was an excellent addition to Liverpool’s squad between 2007 and 2010, and was a consistent supplier of goals from midfield.

He scored 29 goals in his three seasons there, including a number of hat-tricks and an unforgettable late winner at Fulham in 2009. While the likes of Steven Gerrard and Fernando Torres got the headlines, Benayoun was a key element at that time.

He moved to Stamford Bridge from Liverpool, but was very much a peripheral figure there until his exit this summer. The 33-year-old made just 24 appearances for Chelsea, scoring once.

The 29-year-old is one of the most naturally gifted right-backs around, and was one of the first signings at Chelsea under the reign of Roman Abramovich.

He signed for £6m from West Ham in the summer of 2003, but never quite hit the heights many were predicting of the youngster. He was often second choice behind Paulo Ferreira when Jose Mourinho was in charge, and he eventually joined Portsmouth in 2007.

After a great spell with Pompey, Liverpool snapped him up for £17.5m in 2009, and he cemented his place as England’s first choice right-back. He has been a very good servant to the club in his four years at Anfield and, despite some poor current form, still has plenty left in the tank.

The Frenhman has played for more than 10 clubs throughout his illustrious career, and enjoyed a terrific spell at Chelsea between 2008 and 2012.

The 34-year-old often formed a dangerous partnership with Didier Drogba in attack, and was the Premier League‘s top scorer in 2008/09. He also helped them win the league a year later.

Anelka only spent half a season on loan at Anfield during the 2001/02 campaign and, although he only scored five goals, he oozed class and gave the side something extra. Gerard Houllier had the chance to sign him permanently at the end of that season, but inexplicably signed El Hadji Diouf instead.

Torres joined Chelsea from Liverpool in January 2011, but you would never believe that it was the same player of a few years previously.

He joined Liverpool in 2007 for a huge fee, and became the world’s best striker during his time at Anfield. He scored 81 goals in just 142 appearances for the club, and was often the man for the big occasion. Quick, strong and a deadly finisher, the Spaniard was a wonderful player.

On the flip side, his Chelsea career has, to put it bluntly, been a disaster. He has only scored 40 goals in 148 games, and for a player of his ability that is a poor return. He has lost a yard of pace and now looks lacking in confidence in front of goal.

Injuries have hampered him, in fairness, but it’s difficult to see him ever getting back to the player he once was. He may have lost fans on Merseyside after his controversial exit, but he was still a great servant to the club.