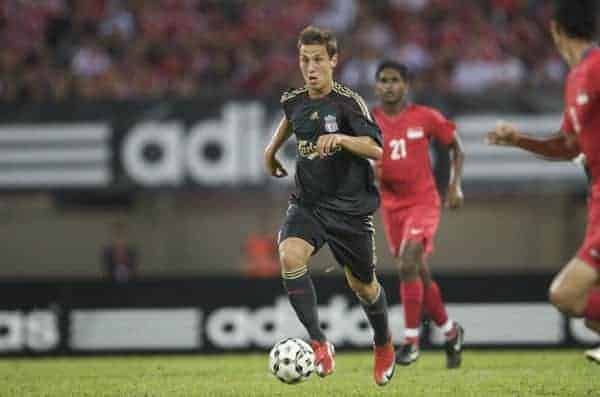 The ‘Where are they now’ series continues with a look at a Hungarian forward who was tipped to become a goalscorer success at Anfield. Nemeth signed for Liverpool due to his scoring record, having netted 18 goals in 37 league games. This incredible goal scoring record did continue as he scored twice on his debut for the then Liverpool Reserves against Manchster City.

A good start soon turned into a great start one week later as Nemeth netted again scoring twice in the mini-derby as the Reds beat their Merseyside Rivals 3-0. 4 goals in 2 appearances soon went to 5 goals in 3 appearances as Nemeth scored in a win over Middlesbrough, and sent his new side top of the league, mainly thanks to his goals.

Nemeth continued to be successful in front of goal and his form didn’t seem to stop as the Hungarian forward netted against Sunderland and Blackburn Rovers. His success in his first season inspired the team to the title of the Reserve Premier League and it was fitting that Nemeth scored in the game where the Reds clinched the title.

He was the Premier Reserve League North Top scorer in the 2007–08 season and this accolade along with strong performances made him Liverpool Fans’ Reserves Player of the Year for the 2007–08 season aged just 18 years of age. His domestic form also match his international form as when he led the line for Hungary Under 19s, Nemeth scored 14 goals in just 15 appearances which included 7 goals in 3 matches in a small tournament in Cyprus. He also scored the goal that sent his nation through to the Under 19 European Championships.

If Nemeth were to continue like that, then the future would be very bright.

Following the immense success that he had in the 2007/08 season, Nemeth earned a call up the first team’s pre season friendlies against Villarreal and Rangers and despite coming as a second half substitute in both games, the Hungarian impressed more in the 2nd game against Rangers. This was because the Liverpool number 29 was involved in two pivotal moments in the game. Firstly he was provider for Yossi Benayoun to score and then he was fouled in the penalty area as Xabi Alonso converted the penalty to deny him his first goal for Liverpool’s first team.

Following many persistent injurires, Nemeth was loaned out to Blackpool to try and replicate the form he showed in the 2008/09 season that earned him a first team call up. Unfortunately, Nemeth’s injury woes continued after he suffered a fractured cheekbone.

The following season Nemeth was loaned to AEK Athens and this loan spell was a lot more successful than his loan at Blackpool. He claimed an assist on his debut followed by two goals in two matches meant that his career with his new side started promisingly, and Nemeth featured in every game prior to the Under 20 World Cup, and because of this Nemeth was selected to play for his home nation Hungary.

As things were looking on the up for Nemeth, injury struck at the World Cup meaning he was again out for several months. Nemeth did have a successful World Cup however, as his goals meant that Hungary qualified for the semi-finals and also goals helped Hungary finish third in the tournament.

When he returned to action for AEK, he claimed two assists in the final day of the season which meant he had acquired more assists than goals in that season and despite his injuries, the contribution he made with his 3 goals in 19 games helped AEK secure a play-off place.

When he returned to Merseyside, he found himself immediately leaving the club, this time for good when he signed for Olympiacos for €1m. In his contract clause, Olympiacos would have to pay Liverpool 25% of his transfer fee if he leaves Olympiacos.

Nemeth did struggle for the Greek side despite helping his side win the Greek Super League, and only made 4 appearances without scoring in 2 years with the club. His contract was then terminated in September 2012.

Before his contract was terminated, Nemeth had 3 loan spells. His first loan spell was with Olympiacos Volos, where he featured 13 times, scoring just once in their 3-0 win over Panserraikos. His second loan spell was with previous club MTK for the 2011/12, where he only made 1 apperance scoring once. His final loan was with Eredivise side RKC Waalwijk for 6 months. He did score winning goals against Vitesse and De Graafschap and overall scored 4 goals in 17 games before returning to Olympiacos.

When he contracted with the Greek club was terminated, Nemeth stated that he preferred to play in the Eredivisie. Since he made an impact with Waalwijk, the club tried to sign him back after his Hungarian national coach joined the club after Ruud Brood was sacked.

Unfortunately for them, Nemeth decided to follow his former coach Bruud and sign for Roda JC, the team he currently plays for. Nemeth currently has 9 goals in 42 apperances and seems to has settled after a very tough few years that saw him play at 5 clubs in 3 different countries in just 3 years.

However this season, Krisztián Németh has either scored or assisted an Eredivisie goal every 98 minutes this season after scoring 7 goals and claiming 6 assists. This means that things are only on the up for the Hungarian.

If it wasn’t for injuries, Nemeth could have filled his potential and became a top player in the future, but now at Roda JC, Nemeth is starting to show the rest of Europe what he can do and why Liverpool snapped him up. I for one would be tempted to try and sign Nemeth either on a loan deal or permanently after seeing that statistic for this season. Would you agree? Do you think Nemeth will become a good player in the future? Was he unlucky with his career thus far? If you have an answer to any of these questions then be sure to leave your comments below, and if you have any suggestions for players I can cover in upcoming editions of Where Are They Now, then also leave that in the comments below.

Previous ‘Where are they now’ features

For more updates on former academy players, follow me @ScottTaylorUK.