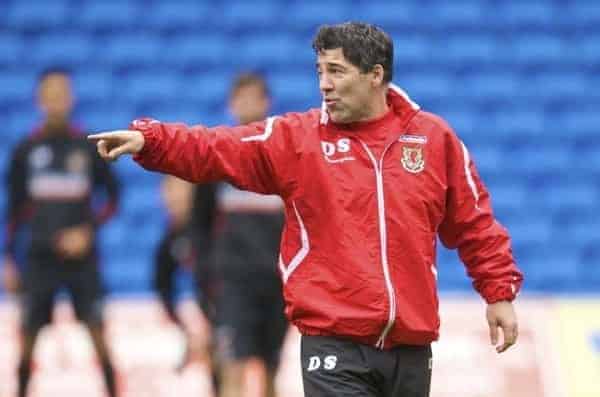 There have been a surprisingly large number of players to have played for both clubs over the years, and Henry Jackson (@OnFootballTweet) chooses his five best. Do you agree? Although Saunders only lasted one season at Anfield, he was still a very fine striker with the knack of finding the back of the net.

He scored 23 goals in all competitions under Graeme Souness, and won the 1992 FA Cup with the club. He moved to Villa from the Reds later that summer.

He was more of a success at Villa Park, scoring consistently in his three seasons there and forging a terrific strike partnership with Dalian Atkinson. The former Republic of Ireland international enjoyed two spells at both clubs, and was a very good left-back and centre-back in his prime.

He was signed by Kenny Dalglish as a 17-year-old in 1986, and was an excellent servant in his first spell an Liverpool. He won the 1989 FA Cup and the league title a year later, before enjoying seven excellent years at Villa.

Staunton returned to Liverpool under Roy Evans and Gerard Houllier in 1998.  He famously played in goal for the final 15 minutes of the Merseyside derby at Anfield in 1999, after Sander Westerveld had been dismissed.

He returned to Villa again in 2000, and although age was catching up with him, he remained a key player until his exit three years later.

Berger was a great player at Liverpool, and only injuries prevented him from becoming a really top, top star at the club. Blessed with a fantastic left foot and great technical ability, he was a superb winger with a physical presence about him too.

The then 22-year-old signed after his excellent displays for the Czech Republic at Euro ’96, and he scored 35 goals for the club. Included in these strikes were a hat-trick against Chelsea in 1997 and the unforgettable free-kick against Manchester United in 2000.

Collymore was an enigma of a footballer, but when he was fully focused he was a fantastic player.

He joined Liverpool from Nottingham Forest for a British record fee of £8.5m in the summer of 1995, and scored a memorable goal on his debut against Sheffield Wednesday at Anfield.

In Collymore’s two seasons at Anfield, he and Robbie Fowler forged a magnificent partnership in attack, scoring 102 goals between them in that time. His behavioural problems became an issue, however, and he was sold to Villa in 1997 for £7m; a record signing for the club.

There were bursts of brilliance in his three years at Villa Park, but he suffered from depression and was eventually sold to Leicester City in 2000. The Irishman enjoyed great spells with both clubs, and was a very influential midfielder at the top level for many years.

He joined Liverpool in 1987, signing for £825,000 from Oxford, and became a key element of arguably the Reds’ most entertaining side of all time. Playing alongside the likes of John Barnes, Peter Bearsley and John Aldridge, Houghton won two First Division titles (1987/1988 and 1989/1990) and two FA Cups (1989 and 1992), helping produce an outstanding brand of football in the process.

Ron Atkinson signed the midfielder in 1992, and he became a fans favourite at Villa Park. He won the 1994 League Cup, and also came close to winning the Premier League in the 1992/93 season.

Who do you think the greatest player to have played for both Liverpool and Aston Villa is?