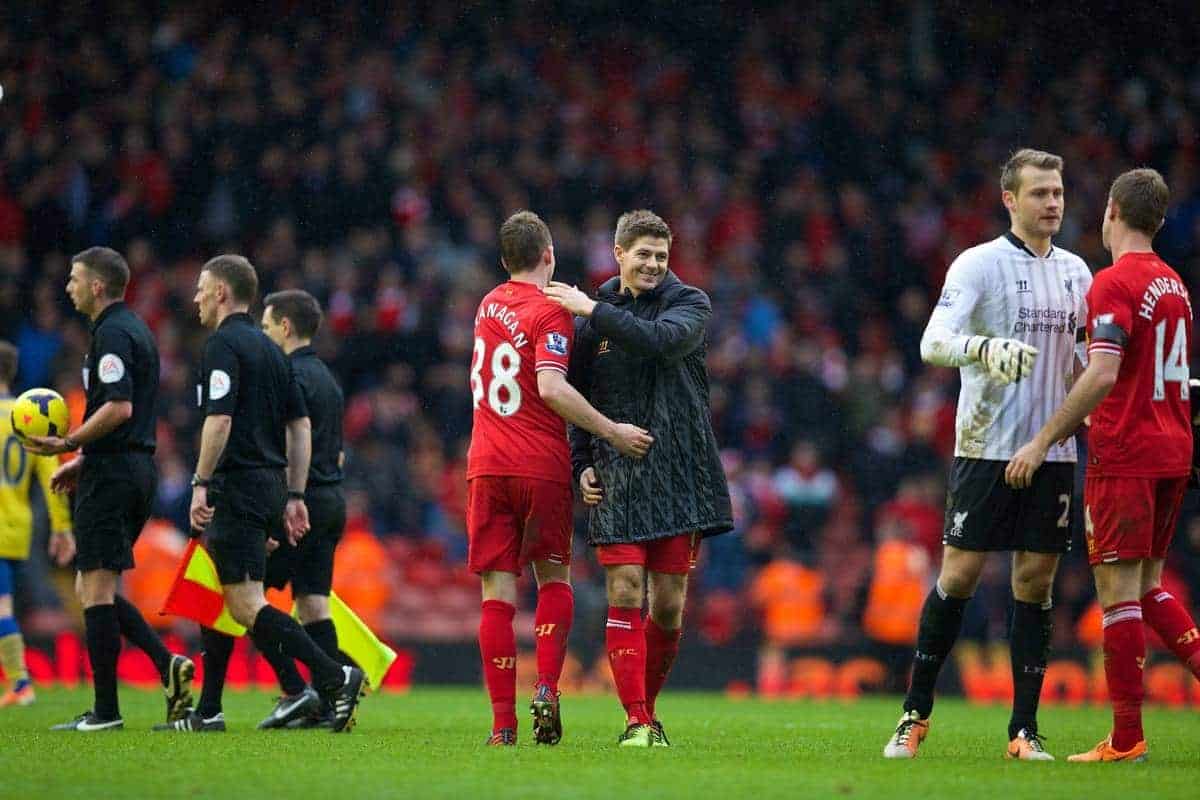 Aaron Cutler takes a look at how Jon Flanagan has revived his Liverpool career this season.

Be honest, you never envisaged Jon Flanagan starring in a 5-1 trouncing of Arsenal. Then again, few imagined Jon Flanagan forcing his way into a Brendan Rodgers squad, let alone a starting XI.

The turnaround in fortunes of Liverpool’s rookie full-back has been quite remarkable. Thrust into the first team picture at a mere 18 he offered initial promise before falling from favour quite spectacularly. He seemed set to be remembered for one suicidal back-pass at Ewood Park, costing the unfortunate Doni both a red card and Wembley appearance in the process.

A resultant Premier League exile showed no signs of abating with Flanno destined to follow former academy graduates Stephen Wright and Jon Otsemobor through the Anfield exit door and into league football wilderness.

His fate was all but sealed during Rodgers first pre-season, where the Being: Liverpool cameras caught him instructing the youngster to keep it simple – ‘You’re not Cafu’ his honest but brutal assessment. To his eternal credit Flanagan knuckled down and worked at his game, desperate to salvage a Liverpool career his father was denied. More on that later.

Reserve team football beckoned, save for an infamous FA Cup game at Oldham – the less said about that the better. Having become an almost satirical figure, there was collective shock and dread at a sudden recall away to Arsenal in November.

Glen Johnson was ruled out through illness and thus Flanagan was pitted against the league leaders in an unfamiliar wing-back position. The reds themselves fell desperately flat but the youngster’s performance was fairly solid. He defended soundly, offered width when possible and never hid from receiving possession, despite The Gunners imperious pressing game. Substituted in the 68th minute he hardly silenced his critics but kept them at bay.

Normal service was resumed the following weekend with Flanagan dropped from both the team and squad for the visit of Fulham. Indeed, there was every chance that Emirates cameo would prove his sole appearance of the Premier League season. Until Goodison Park.

Rumours abounded in the week preceding the Merseyside Derby that Flanno would be involved. Even so, his eventual inclusion surprised many.

Blue eyes lit up at the certain mismatch that would prove Mirallas vs. Flanagan. The Belgian certainly played his part in a pulsating 3-3 draw but his impact came in spite of Flanno, not because of him. Indeed, Liverpool’s number 38 was outstanding throughout. Far from overawed by the occasion he relished his chance and Simon Mignolet apart, was far-and-away the reds best performer.

Never in doubt was that tigerish tenacity but nobody realised how composed he was (or rather had become) in possession. Countless times he received the ball in tight areas only to pop it off to a reds shirt and spring an attack. He won a near 90% of his challenges and showed tactical awareness belying his years, covering the bewildered Martin Skrtlel and Daniel Agger on numerous occasions. And lest we forget, this all came from a left-back berth, by no means his natural position.

Liverpool fans love nothing more than one of their own shining in the heat of a derby atmosphere and plaudits rightly followed. Steven Gerrard led the acclaim, declaring ‘Our star man, for me, was Jon Flanagan. I thought he was unbelievable. It was one of the best derby performances I have seen for many years.’ The skipper even led his team in a round of applause for the rookie’s display. Some statement.

Keen to show this was no adrenalin fuelled flash in the pan, Flanagan set-about disproving all critics in the run-up to Christmas. He started the next five games and grew in both stature and confidence accordingly. A first senior goal at White Hart Lane crowned his re-birth, guiding a half-volley in via the underside of the bar in poetic fashion. A picturesque moment for both player and team even little Flanno joined in the celebrations!

His mentor, Jamie Carrgher, shared in his delight, texting ‘Well done – the next Roberto Carlos.’

When injury struck against Cardiff the following weekend cynics felt that was that for Flanagan. A brief purple patch in light of injuries was his lot; his own absence would spark the end of this mini-revival. But as has become common in this fledgling career, the defender bounced back.

He was missed away to City and Chelsea, where both Glen Johnson and Aly Cissokho’s merits were called into question. And since returning to the fold at Bournemouth he has been an ever-present.

Another fine showing in a Merseyside Derby stifled Pienaar and Baines before Saturday’s demolition of Arsenal wherin Flanagan rendered the threat of Monreal and Cazorla meaningless. Having featured in 11 of the previous 12 games in which he’s been available we can now say Flanagan has salvaged his Liverpool career. Moreover, he has put forward a compelling case for a regular start when Johnson, Enrique and co. return to the fold.

Comparisons to Cafu and Dani Alves are perhaps a little far-fectched but Flanagan has attributes befitting a top quality full-back. Whisper it but his style of play is more in-keeping with a Gary Neville, by no means a world beater but an accomplished defender who developed his game in the final third. That is something Flanagan must work on.

The modern full-back is expected to overlap and provide an attacking threat. At present, Flanagan has only mustered four shots, while his cross completion rate is a lowly 11%. Those stats will have to change, particularly given the importance of full-backs in a Rodgers set-up. But the manager will work with him, as he appears to have done in possession. Nobody rated Flanagan’s ball-play anywhere near the level required of a Liverpool side built on tiki-taka principles. Recent performances have changed that perception a hundred fold. And of course the main objective of any defender is to defend, which Flanagan does to great aplomb. There is little point in a full-back marauding forward but abandoning defensive responsibilities. A healthy medium must be struck. To date he’s won 75% of tackles attempted and more than half his aerial duels. That is a solid base from which to build.

The refreshing thing about Flanno is he has shown a willingness to improve and carve out a career in spite of his shortcomings; something his father John never managed having been branded ‘lazy’ by Phil Thompson.

Few predicted Jamie Carragher would enjoy such an illustrious career when he burst onto the scene as a fiery local lad whose technique was forever called into question. Flanagan look no further than his former teammate as an example of what can be achieved. Born just a stone’s throw from Anfield he’ll have The Kop willing him on and after this season nobody will be writing him off again.