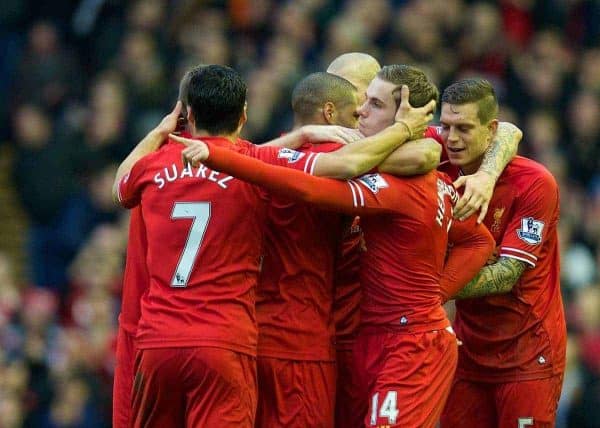 Liverpool welcomed Glen Johnson back into the side after injury, with the 29-year-old replacing Aly Cissokho. Jordan Henderson also returned to the starting lineup in place of Joe Allen, having been rested for the FA Cup loss to Arsenal last weekend.

The lead was doubled thanks to a terrific effort from Jordan Henderson. The 23-year-old curled a fabulous shot into the top corner to get just his second league of the season, putting Liverpool in command in the process.

The game turned on its head immediately, however, as Swansea struck twice in no time. Firstly, former Red Jonjo Shelvey produced a terrific finish in front of the Kop after 22 minutes- the whole of Anfield applauded both his goal and decision not to celebrate- before Wilfried Bony’s header was deflected in via Martin Skrtel. Liverpool’s defensive flaws were being exposed; not for the first time this season.

With Anfield growing frustrated at the half wore on, the nerves were eased when Sturridge headed home his second of the game after good work from Luis Suarez. It was the 24-year-old’s 18th league goal of the campaign.

The second-half started disastrously for the hosts, as Skrtel was adjudged to have fouled Bony in the penalty area. The Ivorian dispatched the spot-kick with ease, and Liverpool were back to square one.

The game ebbed and flowed, with Ashley Williams making a last-ditch block on Sturridge and Simon Mignolet saving well from Jonathan De Guzman, before Henderson had the final say.

The midfielder, enjoying a superb season, scored at the second attempt after his initial shot had been kept out by Vorm, and Liverpool saw out the the final seventeen minutes to earn three high points in their quest for a top four, and maybe even title, push.