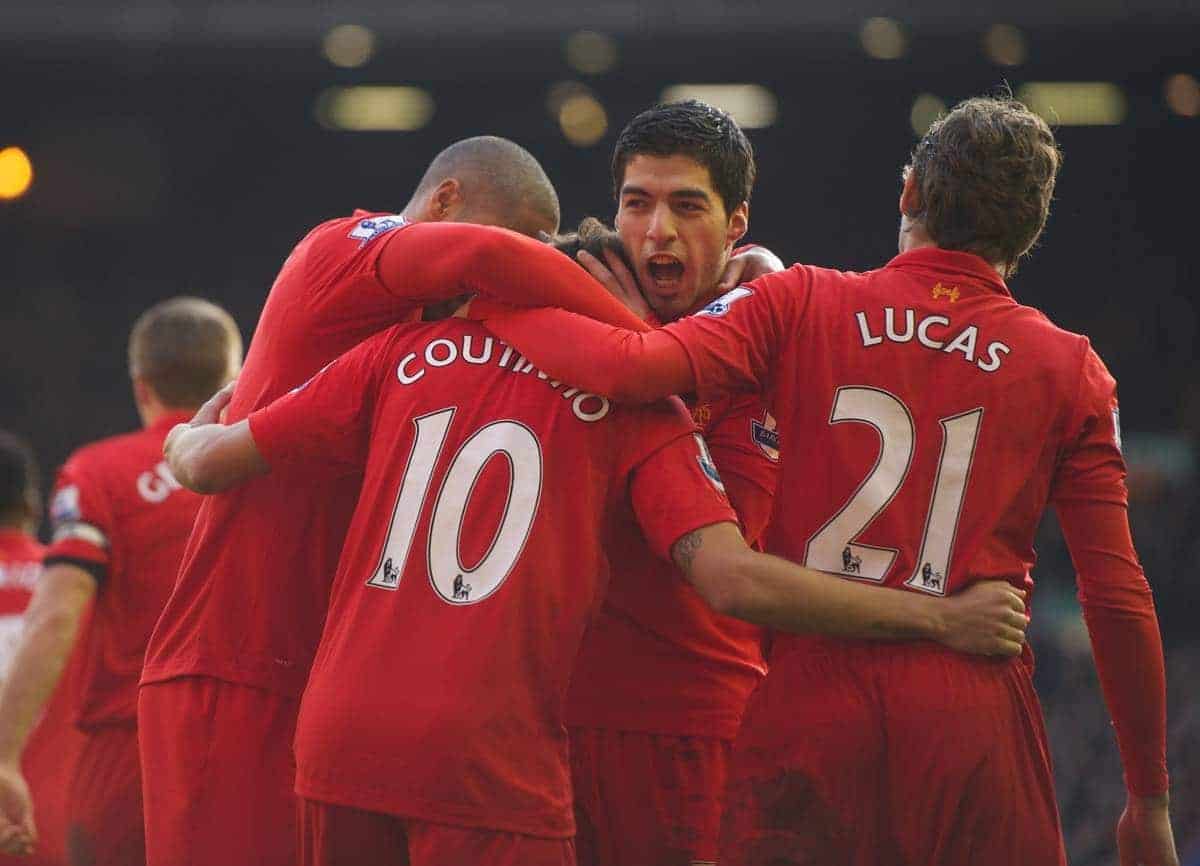 The Reds host the Welsh side at Anfield on Sunday, looking to enhance their title and top four chances in the process. Henry Jackson (@OnFootballTweet) takes a look back at their five Premier League clashes to date. An entertaining encounter earlier on in the campaign saw Liverpool’s 100 per cent record come to an end, with a share of the spoils the deserved outcome for both sides.

A disastrous start for the Reds saw former midfielder Jonjo Shelvey fire home inside the opening couple of minutes; the first goal they had conceded in the league this season.

Daniel Sturridge brought Liverpool level two minutes later, after a mistake by Shelvey, before Victor Moses put the visitors in front, finishing well after running at the Swansea defence.

Swansea drew level through Michu in the 64th minute to make it 2-2, as Liverpool sat too deep, and that’s how the scoreline remained.

Liverpool produced a scintillating display to dispatch of Brendan Rodgers’ former club, in front of a delighted Anfield.

It took 36 to minutes to break the deadlock, however, with Steven Gerrard dispatching a penalty in front of the Kop, after Luis Suarez was fouled. It was the second-half that was truly outstanding. Philippe Coutinho scored his first goal for the club with a well-taken effort, before further goals from Jose Enrique, Suarez and a Sturridge penalty completed the rout against Michael Laudrup’s beleaguered side.

Rodgers’ first game back at the Liberty Stadium since departing for Anfield the previous summer was a frustrating one, as the Reds failed to break down Swansea’s stubborn defence.

A terrific first-half effort from 17-year-old Raheem Sterling came back off the crossbar, while Glen Johnson was denied by Swans ‘keeper Gerhard Tremmel. Jose Enrique also had a goal ruled out for offside.

After the break Liverpool failed to create many chances of note, and it was actually the hosts who almost nicked all three points. Ashley Williams’ header was cleared off the line by another former Swansea man, Joe Allen. The final day of the 2011/12 season did not have a lot resting on it for either club, and it showed in Liverpool’s limp display. Rodgers won his final game in charge of Swansea; he would go on replace Kenny Dalglish a few weeks later.

Having created very little before the interval, Andy Carroll saw an acrobatic second-half effort well saved by Michel Vorm. Carroll and Bellamy saw further attempts go wide, but it was the home side who ended their campaign on a high.

Danny Graham finished well with four minutes remaining, as Dalglish’s side had to settle for a disappointing eighth-place finish in the 2011/12 Premier League.

The two teams met on Bonfire Night 2011, and although there were no fireworks, it was still one of the more entertaining goalless draws you are likely to see.

Carroll and Suarez both had a couple of decent efforts each in the opening 45 minutes, with the Englishman hitting the bar when he really should’ve done better. Swansea, playing some terrific football under Rodgers, were a constant threat on the break.

Liverpool kept pressing for a winner in the second-half, but Vorm was having an inspired game in goal. The Dutchman was fantastic all afternoon, and with the game in its final moments, he denied Johnson a memorable winner with another magnificent stop.

What’s your prediction for Sunday’s clash?