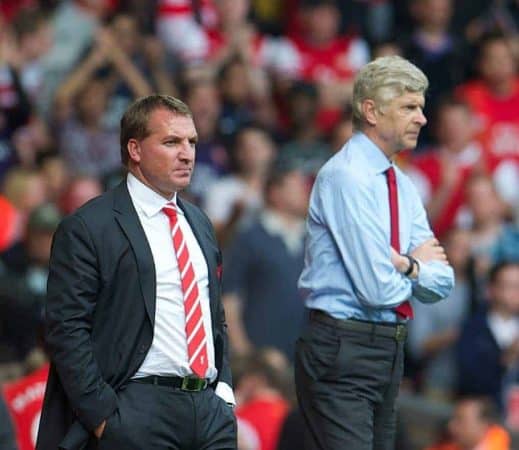 How Liverpool could line up against Arsenal

Liverpool return to FA Cup action on Sunday when they travel to North London to face Arsenal. Ben Twelves discusses the possible team selections for Brendan Rodgers after his side produced two big performances in just five days.

Liverpool take a break from Premier League duties as they turn their attentions to a tough FA Cup tie against the team they dismantled 5-1 at Anfield last weekend.

A similar result and performance to last Saturday is sure to be Brendan Rodgers’ order of the day, but Arsenal will no doubt be looking for revenge after suffering the humiliation of a week ago.

Progression in the FA Cup has gone swimmingly for Liverpool so far, recording textbook wins over Oldham in round three and Bournemouth in round four, which resulted in being rewarded with a trip to the Emirates for the second time this season in round five.

The Liverpool manager has shown through his team selections both of the previous rounds that he is taking the competition seriously.

While whether he should be very much a debate for another time, it is fair to assume that Rodgers will continue to field a strong starting line-up, and one that can guide Liverpool into the sixth round.

But after producing two big performances in just four days, and with Champions League qualification of paramount importance this season, resting those that need it and protecting key players for the more important league games should be very much in Rodgers’ interests.

With Liverpool currently well positioned in their fight to finish in the top four following Wednesday night’s battling come-back win at Fulham, combined with this season being the best opportunity at cementing a return to the European stage, a distraction of the FA Cup at this time is simply not worth the risk of jeopardising our attempts to qualify for the Champions League, even if it is a chance of some silverware.

From a title challenge perspective and the current situation in the Premier League, it could even be argued that while you never want your team to lose a game, an exit from the FA Cup could benefit Liverpool more than remaining in the competition.

A win for Arsenal would progress them to the next round and leave them in the FA Cup with an extra game to play in amongst what is already a busy schedule of Premier League and Champions League fixtures.

This also applies to whoever emerges victorious out of the tie involving Chelsea and Manchester City, and having the teams above us playing games thick and fast in a number of competitions with just a short amount of recovery time, can only benefit Liverpool in their ambitious pursuit of a 19th league title.

However, as previously stated, Rodgers has picked teams to go out and win games in the FA Cup so far and there’s no reason why he won’t do so again.

The fact does remain though, that the game does provide an opportunity to rest those in need such as Jordan Henderson, who is the only ever-present in the Premier League for Liverpool this season, and give match minutes to players returning from injury such as Glen Johnson and Daniel Agger.

Fringe players such as Joe Allen, Iago Aspas, Luis Alberto and Martin Kelly will all be hopeful of returning to the starting team.

With rotation of huge importance this weekend after a demanding couple of games, Brendan Rodgers has a number of options to choose from.

One team selection for Rodgers on Sunday could be:

An alternative could be:

Liverpool are in too good a position in the Premier League currently to risk being derailed in their quest for Champions League football.

While beating Arsenal for a second time in a week would of course provide the team with even more confidence as we approach the business end of the season, changes for Sunday’s game should be seriously considered in order to protect key players from picking up niggles and injuries at a crucial time of the season.

It is another week until the next fixture against Swansea at Anfield and a good period of recovery time for the players, but the FA Cup is certainly not the priority for Liverpool this season which is why Brendan Rodgers needs to ensure that he plays the game and not the occasion on Sunday afternoon.