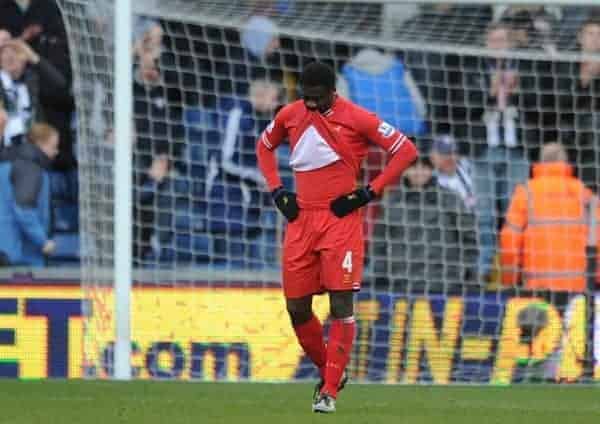 A disappointed Kolo Toure has accepted responsibility for Liverpool throwing away a 1-0 lead at West Brom on Sunday and walking away with just a point, rather than three. With Liverpool leading 1-0 thanks to a first-half Daniel Sturridge strike, Ivorian international Toure played an inexplicable ball across the Reds’ penalty area.

Baggies striker Victor Anichebe ran onto the ball and with plenty of time and space put it past Simon Mignolet for the home side’s equaliser.

“It was a game we should have won 1-0. It was a terrible pass by me,” Touré is quoted in the Guardian as saying after the match. “It’s hard because we played well. It was a tough game. I take the call because it was a very bad pass. I haven’t seen him [Anichebe]. I should have just played to Aly [Cissokho].

“My pass just put the team in a difficult situation. I haven’t seen him and I shouldn’t have passed the ball there. You have to make decisions. Today I took a bad one. [Brendan] doesn’t get angry. He was just disappointed with the situation in the game. I’m disappointed.”

The result means Liverpool stay fourth in the Premier League table, but could have started to create some daylight between themselves and the teams below them.

Nevertheless, the Reds are only three points behind third place Chelsea, who have a game in hand at Manchester City on Monday evening.

Not all doom and gloom. Liverpool remain fourth in the Premier League table, 3pts from third. pic.twitter.com/bKKOpXRgPD

“We have missed an opportunity today but the season is long,” Toure added. “We just didn’t need to have that kind of mistake. I made a bad decision. I don’t know why I have passed it into the middle of the pitch, it was crazy. I’ve made a few mistakes in my life and you learn every day. I will learn from it.”

Liverpool next face Arsenal at home on Saturday. The two sides meet again a week later at the Emirates in the FA Cup 5th round.