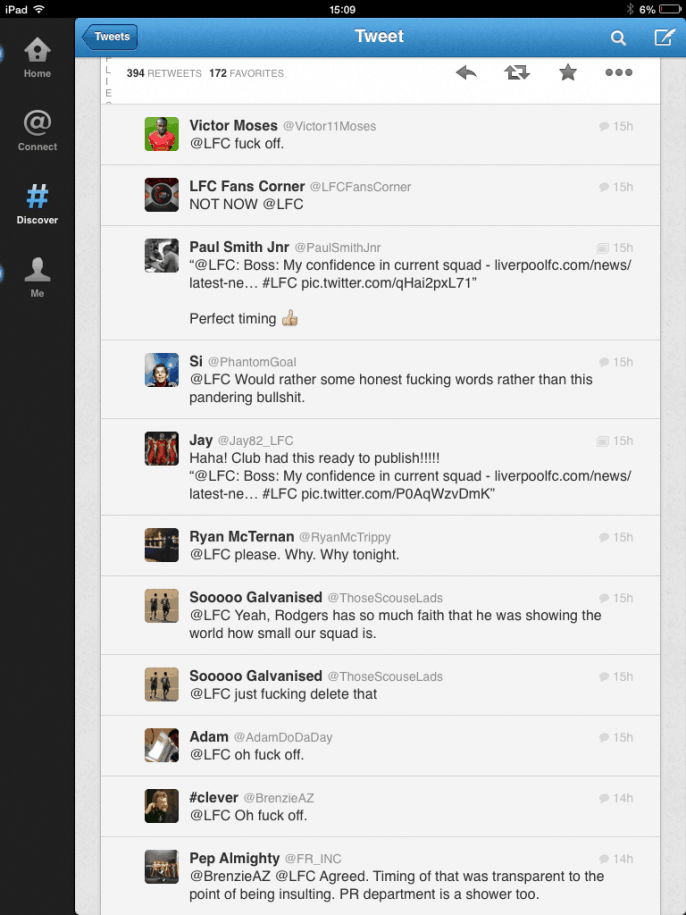 In my last blog I said that I wouldn’t be surprised if we didn’t sign any players in the January transfer window and if that were the case I didn’t really mind. However this was before Lucas got injured and will be put for what appears to be a number of months and Glen Johnson was taken out of the side due to him carrying a number of injuries. His return date is unknown. Both players are key, not only are they amongst our better players, we don’t have a natural back up for either player. One would think it reasonable to expect the club to try to strengthen in those areas during the transfer window. But no. The club wasn’t seriously linked with any fullbacks or central midfield players. Maybe the club think we are well covered, with Gerrard being transformed into the new Dunga and Flanno, Cissokho and Kelly capable of doing a fine job playing full back for a large part of our run-in.

What has been clear in both transfer windows this season is that the club want an attacking player who can either play wide or centrally. In the summer the club was heavily linked with Mkhitaryan and Willian but failed to get either of them. They had to settle for Victor Moses on loan. In the Winter transfer window we spent the majority of it in talks with Salah only for Chelsea to step in and say “thanks for doing all the ground work, we’ll take over from here”. We then spent the rest of the window in the Ukraine trying to sweet talk Mr Kolomoyskyi into selling his club’s best player but unsurprisingly failed to do so.

What makes me laugh is Liverpool based journalists and Liverpool fans, sensible fans saying things like: “The deal was virtually done, the player had agreed terms and passed a medical and Liverpool had triggered the release clause, but the club’s owner wouldn’t sign the paper work. It’s not Ayre’s fault. He did everything he could to seal the deal”.

What fucking nonsense. We did everything apart from agreeing terms with the selling club. Just that annoying, small technicality of the selling club actually wanting to sell the player.

I guess Arsenal fans and journalists were saying the same in August. “The deal for Suarez was virtually done. The player wanted to come to us. Wages were agreed with his agents. We had a medical booked. Just that pesky John Henry wouldn’t sign off on the deal. It’s nobody at Arsenal‘s fault the deal didn’t happen and its not their fault they spent the whole window chasing one player whose club didn’t want to sell while missing out on other targets.”

What also made me chuckle, was the LFC official twitter account tweeting this Brendan Rodgers interview as soon as it was reported the Konoplyanka deal was off.

Classic PR stunt, not even subtle in its timing or delivery. Even funnier were the replies to that tweet.

I would love to know what the LFC delegation was doing in Dnipropetrovsk for 3 days and at what point did they realise the owner didn’t want to sell. What a joke. There clearly is a problem when we’re either trying to sign players for over £15m or when the player we want to sign is also coveted by another club. In short, when things get competitive, we are shit.

Ian Ayre seems to be very good at negotiating commercial deals and the club has progressed very well in this regard. But when it comes to negotiating with other clubs for players within a competitive market, well the proof on how he’s done is there to see.

The club need someone who is better at negotiating in the transfer market. A senior, experienced football administrator or sporting director, it matters fuck all what his job title is. We need someone who is allowed to use judgement and decide if its a good idea or not to over pay by a couple of million pounds and make decisions quickly. Someone who can smell the bullshit and not waste 3 days in Ukraine trying to negotiate a deal that was never likely to be concluded in 3 days. A senior decision maker that Brendan can talk to about football. That someone needs to be based in Liverpool as well. Or in the UK at least for fuck sake.

We are currently in 4th place having just slaughtered Everton at Anfield. 3 points clear of 5th place with 15 games to go. We have our best chance to qualify for the Champions League since we were last in it in 2009. However we have the smallest squad of the top 7 teams and we have a lot of key players injured. If ever we wanted the chance to try to secure our position or even push on and compete with the top 3 it was in this transfer window. Yet we sign nobody.

The transfer policy is confusing and looks as if it lacks a clear strategic plan. During the summer we let Suso go out on loan and buy Luis Alberto for £7m. Last season Suso started 12 games for us. Alberto has started 2 games for us this season. So why did we do that? Was Alberto considered a better player?

We bought young centre back Ilori for £7m and send Wisdom out on loan. None of us see him in a red shirt and he’s sent out on loan as well (while 2 of our centre halves are injured).

Flanno was offered to clubs on loan even though Johnson was playing through injuries. It’s a good thing nobody wanted him on loan as he’s now the best fullback we have available.

Borini is sent out on loan and we buy Aspas, another £7m signing who now can’t buy a game.

Downing was sold and replaced by Moses on loan.

Many fans, including me were waxing lyrical about the transfer committee after they signed Sturridge and Coutinho in January 2013. Since then though they have signed 8 players and only one of them – Mignolet – has made a significant impact. I realise he’s struggled of late but overall I’d say he’s been a positive. Sakho has looked a promising prospect but hasn’t convinced yet in my opinion. At £18m you’re expecting him to be a world class centre half. Or was he a last day of the window – oh shit after fannying around for 3 months of the transfer window we now need a centre half – panic buy?

The other summer signings have left a bit to be desired. So it just goes to show how well Brendan Rodgers has done with the team. 46 points after 23 games is a great achievement considering the squad at his disposal. If we finish the season in the top 4 I would consider Brendan to be manager of the year.

FSG did very well to hold firm and tell Suarez he was going nowhere this season, but other than that they and Ian Ayre have failed to help Brendan strengthen the team. If we miss out on the Champions League I know where I will be pointing the finger. It would be likely Suarez will be off once his buy out clause is met and we’d probably have £100m to spend in the next transfer window. Oh how much fun will that be.

I missed the bloody Derby and only saw highlights but I was amazed at the score. Everton slaughtered at Anfield oh how badly I wanted 6 or 7-0. 4 will do though. My favourite bit was the celebration after the third goal and Sturridge’s explanation of that celebration. When asked by LFCTV why he didn’t do the dance he answered:

“It’s coming back, but you have to make them want it, no? It’s not a given! It will be back, but sometimes you have to just chill out, look at the Everton fans and let them realise what time it is!”

Next up West Brom and it looks like Joe Allen will be back. So what do we do? Put Allen in the side to sure up the midfield for an away game? Or go with the same side that wiped the floor with Everton? I think we’ll win the game either way if BR approaches the game properly as in not underestimating the opposition and making sure the players are fully focused and up for it. Its a big game because we have Arsenal next which will be a tough one.

What do you think?

Another question. Will Suarez break the Premier League goal scorers record? 34 Andy Cole and Alan Shearer. He’d need 12 in those 15 games to break it. Currently has 23 goals in 18 games.