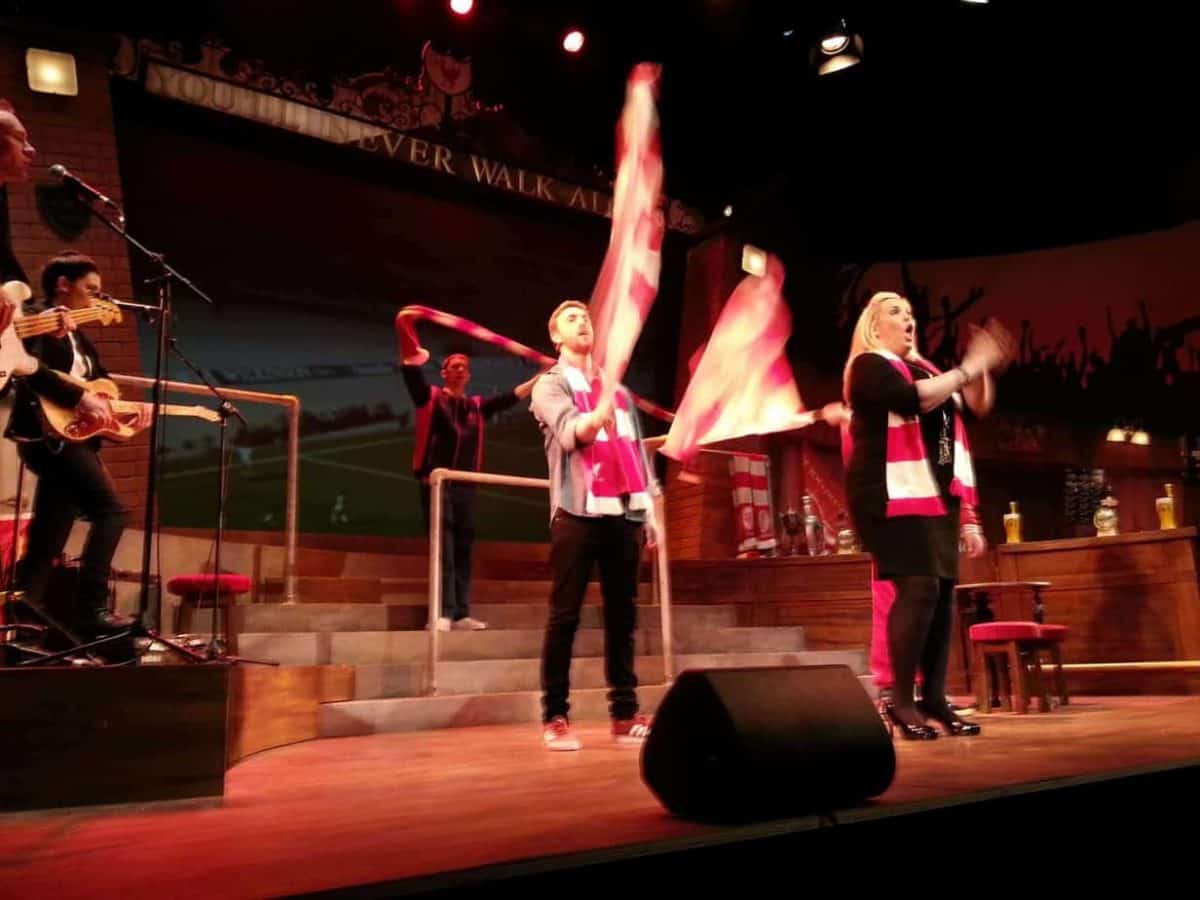 We went along to the press night of The Official LFC History Show, YNWA, at The Royal Court in Liverpool. Neil Poole reviews the thoroughly entertaining show. A childhood of watching bollocks pantomimes in the Liverpool Empire with eager to please jokes served up for both Liverpudlians and Evertonians made me quite averse to going to the theatre in Liverpool.

Accidentally having to endure Blood Brothers not once but twice as a teenager finally pushed me over the edge.

With this in mind, ‘YNWA: The Official History of Liverpool Football Club’ was always going to have to work hard to win me over. I make no bones about this: If it was shit I’d tell you it was shit.

But it’s not. It’s truly excellent.

Fitting the entire of history of Liverpool Football Club in to just over two hours is no mean feat. The story is loosely told on the premise of a family educating an enthusiastic but not-so-savvy, LFC-supporting son of our glorious history.

The family dynamic cleverly acts as the gateway to a lot of the show’s humour and the flimsy of their whim allows for the plausible editing of over a hundred years of history. A case in point being the almost near absence of Roy Hodgson and how the son is amusingly and dismissively told, “we can forget about him!”

The humour is ever-present in this and there are many genuinely laugh out loud moments, that come in different forms.

For the sheer absurd, the depiction of Liverpool goalkeeper and firebrand Elisha Scott squaring up to Dixie Dean, followed by a bout of Tourette’s aimed at his defence is absolutely genius.

The Suarez dive by Jake Abraham (probably best known for Lock Stock and Two Smoking Barrels) boots the ‘Del Boy falling through the bar’ into a poor man’s second place when it comes to physical comedy.

The show is packed with great one-liners too. I won’t give it away here but the punch line to the cocky Manc’s threat to the scouse lads asking to ‘mind his car’ when he tells them there’s a Rottweiler in the back is literally the best joke I’ve heard in years.

Numerous anachronisms such as the Suarez joke (a different one) popping up when we’re still dealing with Liverpool’s history in the early part of the 20th Century keeps the humour unpredictable and fresh.

Anyone with a modicum of LFC knowledge knows that our history is just as tumultuous as it is triumphant. It was with apprehension that I waited to see how the Heysel and Hillsborough tragedies were dealt with. In regards to Heysel it was subtly carried off with a marriage of music and images on the large back screen to tell the story and convey the emotion.

Hillsborough though? Honestly, how on earth do you deal with that sensitively? I’ve personally never written about anything to do Hillsborough because I simply don’t have the capacity with words to do it justice. I don’t want to be the knobhead blogger that cheapens very real and still current pain of the families with clichés or vacuous grandiose statements.

Producer Nicky Allt however deserves a medal for his treatment of Hillsborough in this show. My personal opinion is that it’s not the music that chokes you in the Hillsborough segment but two other features. The meeting of two pairs of fans on the coach on the way to Sheffield, later followed by one empty seat and the inconsolable friend on their return is both striking and sobering.

However, the monologue of the mother who has lost her child and laments the small and everyday details like still having the unopened can of Pepsi he would normally keep for on the way home from the match is absolutely heart breaking. The sheer craft of this puts a massive two fingers up to Boris Johnson and other establishment figures who mock our supposed mawkish sentimentality.

Just as it is at Anfield, music is the heart of YNWA. To be clear, it isn’t a musical; there’s absolutely no fitting of square peg dialogue into round hole melodies here. Simply the dialogue is interspersed with songs that act as the backbone to the mood of story being told.

There are countless examples. The standout though has to be the tale of Istanbul set to America’s ‘Horse with No Name’ (with modified lyrics) while the drama of the game plays out behind on the big screen and the cast dance around in their Fez’s and a flying carpet. They have played a blinder here by not going for the obvious Ring of Fire but reinvigorating the excitement of Istanbul by giving us a new soundtrack to the best day of many of our lives. The Istanbul section is so uplifting and so perfectly designed that doctors need to stop prescribing anti-depressants and just send their patients to watch this instead.

Finally, on the music front I suspect there is lots of hidden meaning in many of the songs that will mean different things to different people. I say this because one thing that really resonated with me was use of The Stereophonic’s ‘Have a Nice Day’ to our 2001 FA Cup Final win. My wife and I have always remembered how the television footage (in the UK at least) ended with a montage of the game set to that tune, and how it really evoked the joy of it all. So it was great when it cropped up. I thought it was only us that it struck a chord with!

I haven’t touched the surface of the numerable highlights of this show. Honestly.

To quote one of the memorable lines of the play, no matter how much you think you know about Liverpool I’d strongly advise you go and see it and “Check your history dickhead!”

(You’re not a dickhead…)