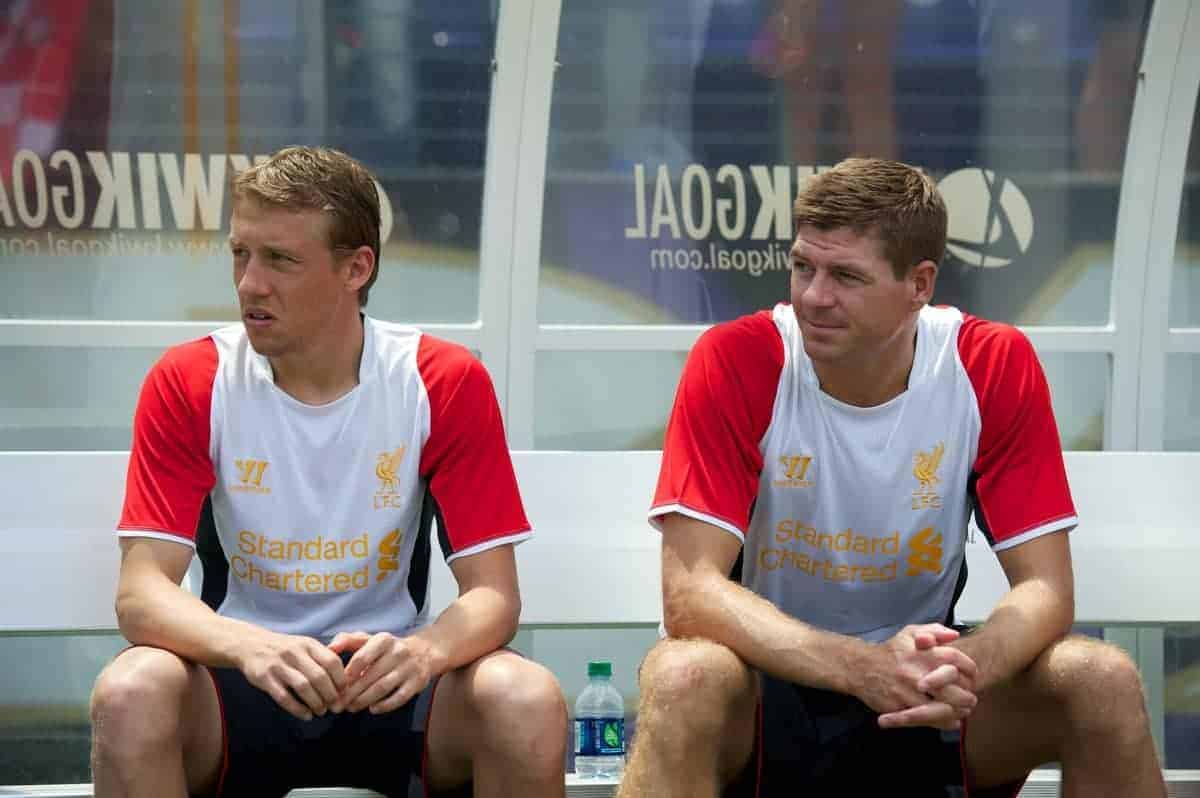 With a fortnight until Liverpool’s next fixture – at Old Trafford – Brendan Rodgers could have Lucas Leiva back from injury. Andrew Lawrence takes a look at the stats when he and/or Steven Gerrard start. Do they confirm what we’d all expect?

This article started as a comment on Oliver Smith’s piece asking ‘What is Wrong with our defence?’ but I thought it might be interesting to delve into the issue in more detail. In essence, let’s explore whether we can draw any observations about the impact that both Lucas and Gerrard have had on Liverpool’s Premier League results this season, by looking at the results we have had while they are on the pitch.

First let’s look at the results for Lucas:

The assumption at this stage is that when Lucas was subbed on or off it had little impact on the scoring in the game. For this reason subbed on is included in the ‘did not start’ section.

Now let’s compare that to Gerrard using the same assumption:

Obviously the assumption that the substitutions made no impact is a flawed one. The above tables don’t factor in the timings of the substitutions or the state of the game when the subs are made so we need to make some adjustments to the figures to more accurately reflect the players influence while on the pitch.

You can jump straight to the next table if you wish, but for those who like detail. The figures below have been adjusted to reflect the following games.

Everton (a): Lucas started the match but was subbed off when the score was 2-2. The final score was 3-3.

West Brom (h): In this match Gerrard was taken off due to injury and replaced by Lucas. At the time Gerrard went off Liverpool were leading 2-0. The final score was 4-1.

Spurs (a): Lucas started the match but was substituted when Liverpool were 3-0 up. After the substitution we went on to win 5-0.

Aston Villa (h): Lucas did not start the match, but when he came on to the field Liverpool were trailing 0-2. When Lucas was subbed off (injured) in the same match the score was level at 2-2.

Adjusting for these matches we can now start to get a feel for how Lucas and Gerrard may have impacted matches while on the pitch (including both starts and non-starts).

Before we discuss the results let’s look at one more comparison. The impact on results when one plays but the other doesn’t.

Fortunately, whenever Lucas hasn’t started, Gerrard has, and vice-versa so the results are fairly easy to calculate. We only need to make a few slight adjustments to the ‘did not start’ figures calculated previously.

First we need to reflect the brief period at Spurs when neither were on the pitch (Alberto replaced Lucas for the final 11 minutes, Gerrard was injured), and adjust for the effects of West Ham (h) when Lucas replaced Gerrard.

We also need to adjust for the Villa match when Lucas was brought on at half-time and two goals were scored while he was on the pitch. This figure had previously been recorded in the ‘did not start’ figure.

The adjusted figures are recorded in the table below:

For those that might be interested let’s also look at Gerrard’s last eight games, those he has played as a defensive midfielder.

Obviously, this analysis does not factor in the implications of home and away form, or the quality of the opposition. It does not factor in the direct role that the players may have made in relation to specific goals, both via mistakes or assists. However, it does provide us with a general flavour as to how the team performs when the two players are on the pitch.

Using the above stats, it does appear to confirm several things you’d expect, namely:

The bottom line is that this analysis suggests what I suspect that many people already know: if you want Liverpool’s best defensive team on the park, play Lucas. If you want a higher scoring, but defensively more vulnerable strategy, play Gerrard.

The only caveat: you shouldn’t play them together.