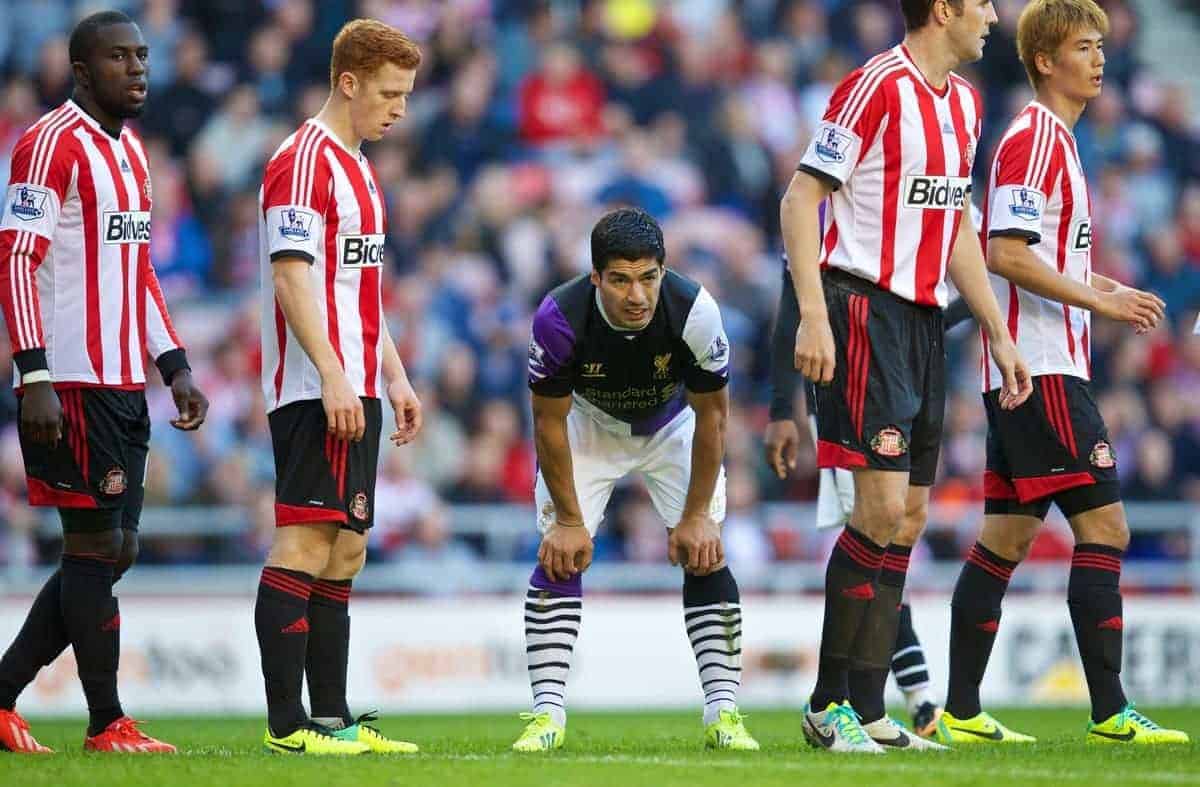 Adam Griffies (@whatahitsonlfc on Twitter) looks ahead to Sunderland‘s visit to Anfield on Wednesday night, and theorises how we should approach the game tactically.

Liverpool host Sunderland on Wednesday night, as the Reds look to maintain their imperious run of form.

Brendan Rodgers’ men are currently on an unbeaten streak of 11 league games, the fifth best record of any side in Europe’s top five divisions, and have won six consecutive matches, netting at least three times in each of those six.

This goal scoring feat has only previously been equalled in the Premier League by three teams: Arsenal, Manchester United and Newcastle.

Capital One Cup finalists Sunderland sit perilously in 18th position in the Premier League, after a damaging 2-0 defeat to Norwich at Carrow Road on Saturday.

The Black Cats do however have two games in hand on the four teams directly above them in the table, after their impressive exploits in both cup competitions, and will be desperate to take something from Anfield.

The reverse fixture between the sides at the Stadium of Light took place in September and ended in a pretty comprehensive 3-1 Reds’ victory.

Luis Suarez grabbed a brace that day, as he showed no signs of rustiness on his return to Premier League action after his long-term biting ban. And of course, he hasn’t looked back since.

Other than Jose Enrique with a knee problem, Brendan Rodgers has a full squad to select from for this game.

We have utilised a narrow diamond system in our last three matches, and despite it yielding reasonably emphatic results, I would like to see one or two changes.

The formation Rodgers has implemented in recent weeks places a heavy burden on our full-backs, both offensively and defensively, with no other wide support further forward. This was exploited at times by Southampton, Manchester United and Cardiff.

In my opinion, a 4-3-3, used in the resounding home wins against Arsenal and Everton and the away victory at White Hart Lane, offers more balance.

It also allows us to include Philippe Coutinho, Raheem Sterling, Luis Suarez and Daniel Sturridge in the same side; again, this was the case against Arsenal and Everton, as Coutinho attacked the space from central midfield and Sterling joined Suarez and Sturridge to form a menacing front trio.

Anyone suggesting that including this quartet would leave us too open defensively, have a re-watch of those games.

In defence, I think it’s time for Mamadou Sakho to return. The Frenchman was firmly establishing himself at the heart of the Reds’ back line when he picked up his untimely hamstring injury at Stamford Bridge in December.

I’ve heard a lot of people this week condemn a possible return to the side for Sakho, saying we need to stick with a settled defence. Listen, I’m all for a consistent back four, as long as it includes the 24-year-old.

To be as frank as I can, Mamadou Sakho is unequivocally our best central defender and should not be sitting on our bench.

Elsewhere, Brendan Rodgers will surely have an eye on a possibly looming suspension for Steven Gerrard. The Reds’ captain is one booking away from a two-match ban for accumulating 10 domestic yellow cards this campaign.

To put it simply, should Gerrard get booked in any of our next four fixtures he will be forced to sit out the two games that follow.

Obviously, with the visits of title rivals Manchester City and Chelsea on the horizon this is something to keep an eye on. Expect Lucas to replace our skipper midway through the next few games if we manage to establish a comfortable lead.

Put it this way, I’d be very surprised if Steven Gerrard played all of the next 360 minutes of football we are involved in.

It’s only right to mention the mercurial Luis Suarez. With his hat-trick against Cardiff, he took his goal tally for the season to a ridiculous 28 in 25 games, equalling Robbie Fowler’s Liverpool Premier League record.

I wouldn’t bet against him surpassing that on Wednesday, and who knows, he could even go past Cristiano Ronaldo’s highest total of 31. And yes, there are eight games still remaining.

As I alluded to earlier, Sunderland head to Anfield off the back of a significant defeat to Norwich on Saturday, and are without a win for six matches. In fact, Gus Poyet’s men have not scored in any of their last three outings.

Ask Black Cats’ fans who their best player has been this season, and you’ll receive a unanimous answer: Fabio Borini. The Italian forward, on loan from Liverpool, has impressed fans with his desire and tenacity particularly.

Unfortunately for those supporters, but gladly for us, he is ineligible to play on Wednesday due to the terms of his loan agreement.

The build up to this game reminds of the pre-match talk before Aston Villa’s visit to Anfield in January. The only question before that match seemed to be ‘How many are we going to score?’ We all know how that one started, and ended up.

Having said that, this Liverpool team seems to have a steely determination now; the bit is between our teeth and we can see the finishing the line.