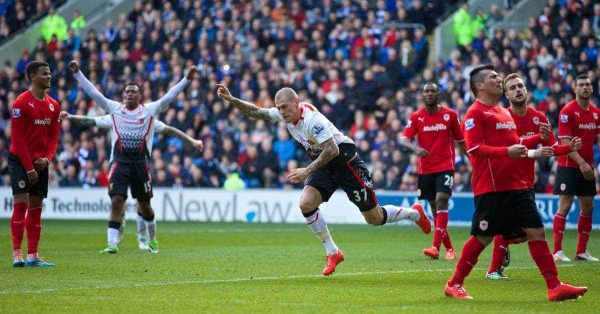 After looking destined to be heading out of the Anfield exit door last summer, Martin Skrtel has rejuvenated his Liverpool career with some impressive performances. Ben Twelves discusses what the future holds for the Slovakian on Merseyside.

Martin Skrtel’s future at Liverpool looked bleak to say the least as Brendan Rodgers’ first season as manager drew to a close. The central defender found himself very much out of favour in the second half of last campaign, which then saw Jamie Carragher muscle his way back into the starting eleven, raising a number of big question marks over the Slovakians’ Anfield career.

Having fallen out of favour, mainly due to some dreadful performances against Oldham in the FA Cup and away at Southampton, Skrtel ended up firmly rooted to the substitute’s bench. He started only four of a possible 18 league games from January to the end of the season and it was therefore widely expected that he would indeed leave Liverpool after six seasons of service.

Alongside this, part of Rodgers’ rebuilding process at Anfield meant that defensive reinforcements were sure to arrive and when Napoli boss Rafa Benitez, the man who brought Skrtel to Anfield reportedly came calling for the imposing centre back, it seemed his departure was only a matter of time.

But a move never materialised and when the summer transfer window closed, the 29-year-old was still a Liverpool player, much to the surprise of many. Mamadou Sakho and Kolo Toure both joined the club which led to many feeling that the most the eastern European could hope for until an inevitable move in January, was appearances from the bench when needed.

After starting the first two league games of the season on the bench, injury to Toure meant Skrtel was thrown in to face Manchester United in our 1-0 win, partnering Daniel Agger at centre half. He produced a fine display, completely controlling their main threat, Robin van Persie, who barely had a sniff of goal all game. It was a significant win for Liverpool and one that saw Skrtel provide food for thought for the manager going forwards.

He deservedly kept his place in the side for the 2-2 draw away at Swansea, despite the new first choice Toure returning from injury. An outstanding piece of defending from Skrtel in the match helped a lacklustre Liverpool pick up a point, as he produced a last ditch tackle that prevented Wilfried Bony tapping home when he looked nailed on to score.

He had seemingly played himself into contention and this, combined with Rodgers’ desire to unleash ‘SAS’ as a two man partnership saw the manager opt to deploy a 3-4-1-2 formation, opening up a permanent space at centre back for the resurgent Skrtel. Even still, when all were fit it was widely expected that Toure, Agger and Sakho would take the shirts. But credit to the manager, he rewarded what he felt was good form and continued with Skrtel in the back line.

Even after the 3-4-1-2 experiment had finished, the Slovak, somewhat strangely some might argue, remained in the team and despite a horrendous showing alongside Toure in the 3-1 defeat at Hull, it was the Ivorian that made way and Skrtel kept his place in the team for the visit of Norwich.

Since what previously looked like end game at Liverpool during the summer, Martin Skrtel has gone on to rack up 34 appearances in total this season, including 28 league starts – the most of the centre halves. Injuries to fellow defenders have played their part in that, but those who all seemed to be options ahead of him in Sakho, Toure and Agger, have all sat on the bench at some stage while the 29-year-old has played.

Quite oppositely to what was envisaged by most, he has gone on to have a decent season this year so far. Periods of uncertainty, mainly when playing with Toure, have been followed by more settled performances next to Agger and Sakho on occasions, and he has weighed in with some vital goals including a brace in the 5-1 demolition of Arsenal.

As the season has gone on and Liverpool have progressed impressively, so has Skrtel. Previous rashness in and around the box has seemingly become a thing of the past and he now looks as settled as ever and firmly in the team on merit.

Despite being lucky that injury presented him with a place back in the side, credit must go to the Slovakian international for the way he has grabbed his chance with both hands and forced his way into becoming a permanent fix in the side. Praise must also go to Rodgers, whose man management, something that Steven Gerrard praised only last week, has brought him back into good form.

Rodgers’ continuing project at Anfield will see more players come and go as he looks to piece his ideal squad together. Another centre back is required, with Skrtel and Agger both ageing but it does look less likely that the one to make way will be Skrtel. Perhaps Toure, whose Anfield career started so promisingly but has tailed off, could exit after only a season or with Sakho waiting in the wings, Agger may find his time at Liverpool coming to an end.

While Martin Skrtel is certainly no fix for a long-term solution for Brendan Rodgers, his performances this season should see him remain at Anfield for another year, where it is almost guaranteed that Liverpool will be involved in far more fixtures and therefore in need of a bigger squad.