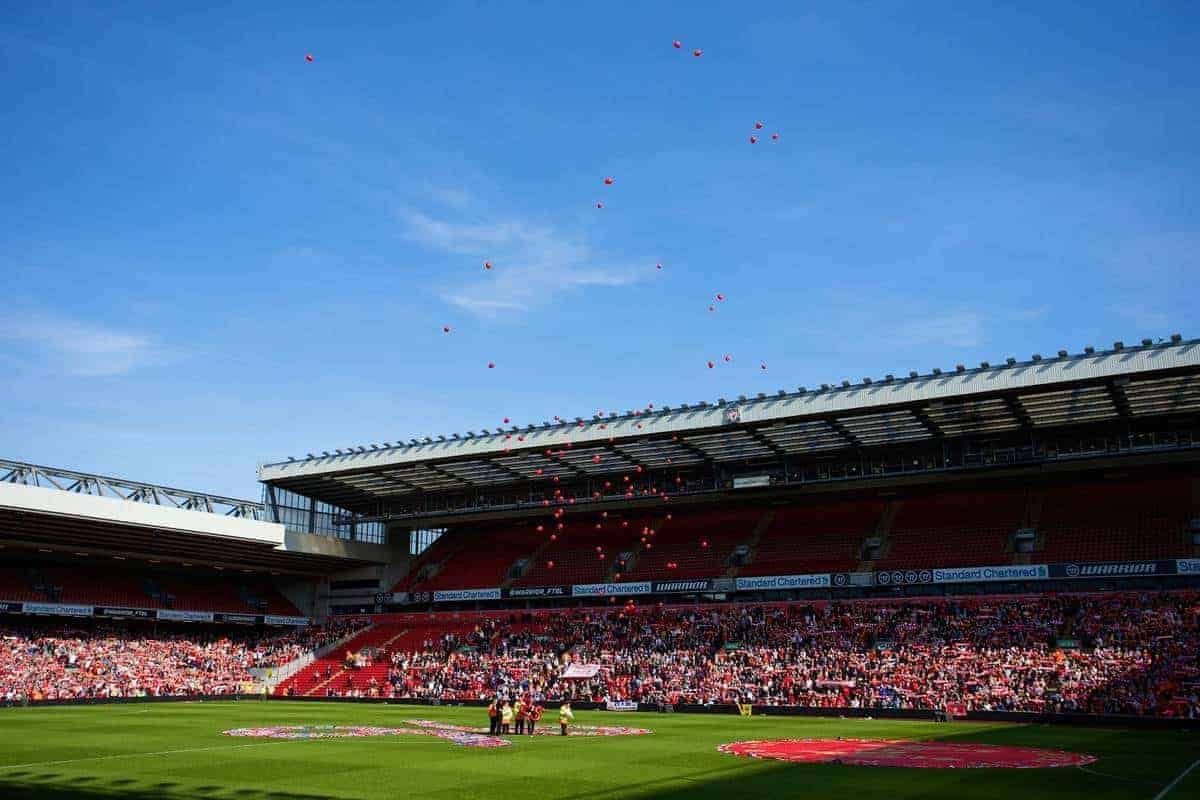 Prior to kick-off, This Is Anfield lay flowers at the Hillsborough Memorial on Anfield Road on behalf of everyone who writes for the site, and all our readers:

Laying these flowers at the memorial for the 96 on behalf of everyone at This Is Anfield and our readers. pic.twitter.com/x09KmKdDZG

A ’96’ made of over 3,500 scarves from football and sports fans from all over the world lay in the middle of the pitch to signify unity.

Fans were urged to spend moments remembering the victims as individuals, and there was much praise for everyone connected with the campaign for justice.

Reverend Kelvin Bolton began the service, introducing the hymn ‘Abide With Me’. Each of the names of the 96 people who lost their lives at Hillsborough were then read out by Reverend David Smith, Reverend Kelvin Bolton and Father Stephen Maloney of Oakfield Methodist, Christ Church & Holy Trinity and All Saints Church Anfield respectively.

Anfield then observed a minute’s silence at 3.06pm in remembrance and thanksgiving. The match that fateful day was abandoned at 3.06pm.

Prayers were read by the Reverends and Father Stephen Maloney, before Lee Roy James sang the Hillsborough Anthem, backed by the Love & Joy Gospel Choir.

After further prayers, blessings and hymns, Andy Burnham MP spoke in front of the Kop for the first time since the speech which prompted shouts of ‘Justice!’ from the Kop five years ago.

Burnham spoke about the way the Memorial Service had impacted him that day and how it had given him the “political courage” to take the justice campaign to Parliament.

Trevor Hicks and Margaret Aspinall, President and Chairwoman of the Hillsborough Family Support Group then addressed the congregation, thanking a long list of people for their unwavering support over the last 25 years.

The service finished with a moving rendition of ‘You’ll Never Walk Alone’, lead by Gerry Marsden and Neil McHale, with all sides of the ground lifting their scarves aloft in memory, friendship and unity.

Brian Reade of the Mirror and writer Jimmy McGovern released the 96 red balloons into the sky in memory of the fans who died at Hillsborough.

Many Everton fans also attended the service, and too laid flowers and scarves at the Memorial.

The sun was shining on Anfield throughout the afternoon as L4 paid tribute. As ‘You’ll Never Walk Alone’ came to a finish, chants of ‘Justice for the 96’ and ‘We’re Gonna Win The League’ rung around the ground.