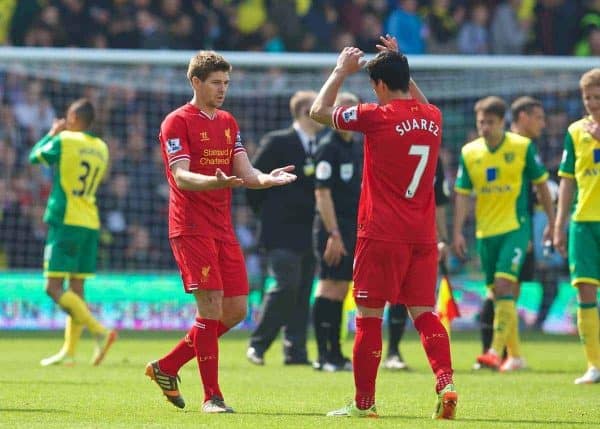 Liverpool went five points clear at the top of the Premier League table after a nervy win over the Canaries- their 11th straight league win- and Henry Jackson (@OnFootballTweet) rates each Reds player on the day.

The Belgian had a poor game, after a recent run of good performances, and was badly at fault for Norwich‘s first goal. The 26-year old didn’t look particularly composed on the ball, and his decision-making was a little erratic.

Johnson was solid throughout, doing plenty of good defensive work that some don’t believe he has in his armoury. He didn’t get forward much, but showed good quality on the ball.

The Slovakian was one of Liverpool’s best players yet again, leading by example at the back. He won countless headers, made plenty of interceptions and stayed strong during Norwich‘s late onslaught.

The 24-year-old is not convincing on the ball at times, losing possession in dangerous areas and generally not exuding great composure. He was good in the air, but it wasn’t his greatest performance.

Another mature display from the 21-year-old, who defended resolutely and got forward effectively from start to finish. He can be a little naive, but that’s to be expected at his age.

Less noticed than he has been in previous matches, but the skipper never put a foot wrong all afternoon. His passing was superb, while the defensive work he did was unnoticed but vital.

The Brazilian played in a more advanced midfield role, but never looked entirely comfortable there. He was industrious as ever, but lacked quality in attacking areas. Needs to stop giving away needless fouls.

The 24-year-old made a very good start to the game, almost scoring and producing a crucial block to deny the hosts, and he was neat and tidy as always. He faded as the match went on, however, and was replaced by Daniel Agger late on.

The 21-year-old was quiet throughout. He certainly didn’t do anything wrong- his balance and ability on the ball was always eye-catching- but he lacked the brilliance he showed against Manchester City last weekend.

The 19-year-old’s fantastic season continues, and he was Liverpool’s best player and match-winner on the day.

His superb strike opened the scoring, he provided the assist for Luis Suarez’s goal and he got his second of the game with a deflected effort in the second-half. A constant threat.

Suarez hasn’t been in top gear of late, but he still played a big part in a huge win for the Reds.

His fine finish made it 2-0- his 30th league goal of a phenomenal season- and some of his touches and vision were sublime at times.

The winger added pace to the team when he came on, and helped take the sting out of the Canaries’ play with some good counter-attacking.

Came on to help nullify Norwich‘s aerial threat, and did his job well.

Who was your Man of the Match? Let us know in the comments section below.