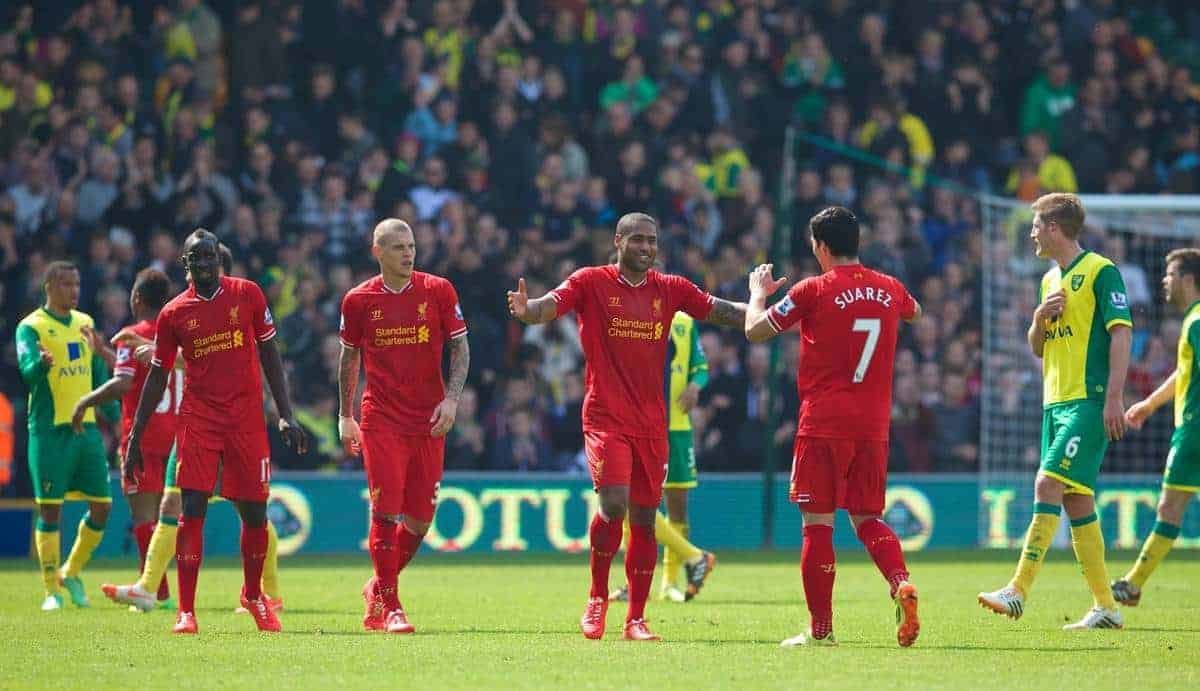 If you’re the same as me, you probably feel you’ve aged 100 years during the last few Liverpool games.

This season is definitely testing both the heart and head, and Sunday’s 3-2 victory over Norwich City at Carrow Road was no different, with the Reds holding on for the important three points.

The Premier League title is so close now, you could almost touch it. Having said that, there’s also still a long way to go, a lot more heartbeats to jump and a lot more nerves to calm.

For the optimists out there, there is a scenario of results which could see Liverpool named champions just a few hours after Sunday’s clash at home to Chelsea. It would require Manchester City to drop points at home to West Brom on Monday night, Liverpool to beat Chelsea (Sunday, 2.05pm), and then City to slip up at Crystal Palace (Sunday 4.05pm).

If your head is full of mathematical equations based on the league table and possible outcomes of games, then we’re on the same wavelength. You may even have worked out that probability that Everton could win Liverpool the league with a result over Man City in the final week of the season.

But for now, let’s reflect on Liverpool’s 11th consecutive victory, starting with a look at the papers:

Henry Winter of The Telegraph went with the angle that Liverpool took inspiration from Steven Gerrard’s leadership and the “We Go Again!” mantra as Norwich made hard work for the Reds:

They needed his [Gerrard’s] resilience here. Nobody said it would be easy for Liverpool. Nobody said it would be a procession, even with the wobbles of Chelsea and Manchester City in recent days. Norwich City, fighting for survival, were never going to be obliging hosts. Inspired by Robert Snodgrass and their raucous fans, Norwich made Liverpool sweat for the victory.

Similarly, Martin Samuel of the Daily Mail picks out Liverpool’s resolve as the key focus to Liverpool’s victory at Carrow Road:

Ignore Norwich City’s league position for a moment. This really was a test of Liverpool’s resolve. Coasting and two goals clear after 11 minutes, and then again at 3-1 up after 62 minutes, Liverpool were pegged back to a single-goal lead with 13 minutes remaining and Norwich throwing the kitchen sink at goal. They survived.
Winning by the odd goal in five, as Liverpool have done in their last two games, hardly makes for peaceful progress, but at least Brendan Rodgers knows his team have character.

The Guardian‘s Sachin Nakrani also goes with the test of character angle, and it’s a good job Liverpool passed it, considering their defence, he writes:

Viewed another way, it was the resilience which Liverpool showed that suggests more than anything that their title charge is not going to crash into a late hurdle. Their defending was not pretty on many occasions and coming up against a side who had failed to score in their previous three games, rather worrying, but they hung on, with the centre-backs Martin Skrtel and Mamadou Sakho forced to clear a barrage of direct deliveries into their penalty area.

The CEOs at Twitter have probably had to order several hundred new servers off the back of Liverpool’s success this season, such is the virtual celebration happening post-match every weekend.

On Sunday, there was a lot of praise for the two goal scorers Luis Suarez and Raheem Sterling, starting with the statisticians:

Luis Suárez is the first Liverpool player to score 30 league goals in a season since Ian Rush in 1986-87.

.@sterling31 must be most improved player this season. Some of his moves look very Suarez-que, surely he learns from him in practice #SLlive

Finally, we leave with you with post-match celebrations of Liverpool owner John Henry‘s wife Linda Pizzuti and the players themselves. Make sure you let us know your thoughts on the game at Norwich and Liverpool’s title chances in the comments section below.

3-points!! 11 consecutive wins! @LFC pulls ahead of the pack at the top of the table! #Dreaming

Get In there boys!!! I'm absolutely buzzing. Roll on next week..3 more cup finals. #redordead #YNWA

C'monnn!! Very important 3 points… Very happy for the great effort from everyone and for being in the Champions League next year!!!!! YNWA

Another one out of the way! #3togo Happy Easter everyone!

Parabéns a todos pela vitória !!! 3 finais nos faltam. Congratulations everyone for the 3 points!! 3 more finals and we go again.