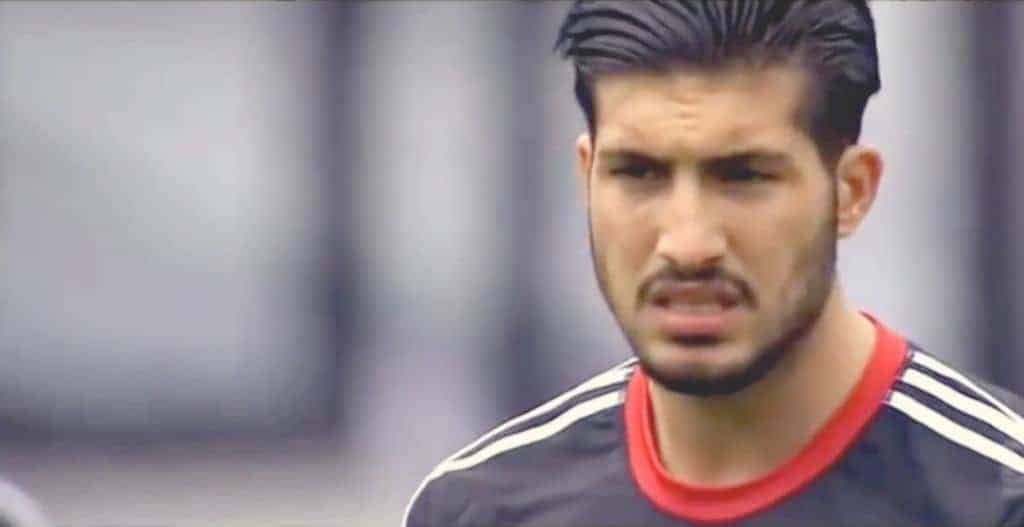 With Liverpool confirming the signing of Emre Can, Jack Lusby looks at why the versatile 20-year-old looks set to be a superb addition at Anfield.

Liverpool confirmed on Thursday morning that Bayer Leverkusen midfielder Emre Can is set to join the club at the beginning of July.

The deal, including a reported £10 million fee, is the second confirmed by the club this summer following the acquisition of Rickie Lambert from Southampton.

A six-foot-plus central midfielder by trade, Can is also able to play at left-back, providing Brendan Rodgers with a suitably versatile option, allowing extra depth to the Northern Irishman’s squad prior to their Champions League involvement next season.

Having made four league appearances for Bayern Munich in 2012/13, scoring one goal, Can made the move to Leverkusen in August 2013, signing a four-year deal including a buy-back clause for the Bavarian champions.

Under former-Red Sami Hyypia at Leverkusen, Can flourished, and it is fitting to see one of the Finn’s disciples making his way to Anfield.

Signing Can is a great move for Rodgers’ Reds, as at just 20 years old the German is already an able performer who has proved his credentials in one of Europe’s most demanding leagues, and has great scope to develop at Liverpool.

The 2013/14 season was a fairly successful one for Leverkusen, with the North Rhine club finishing in fourth position in the Bundesliga, qualifying for a Champions League Play-Off spot for next season.

Leverkusen won an impressive 19 games of the German league’s traditional 34, but also lost 11—this proved the difference as third-placed Schalke 04 converted three of those losses into draws.

Hyypia was sacked at the beginning of April, with former co-head coach Sascha Lewandowksi returning to steer the club to comparative glory.

Can, making his debut season, made 29 appearances, becoming an integral part of the Leverkusen side; in particular, the 20-year-old formed a dominant partnership with German international Lars Bender at the base of the midfield.

The midfielder of Turkish descent helped keep six clean sheets in his 29 games, including an impressive 1-0 victory over Borussia Dortmund in December; Can also scored three goals and made three assists.

After a breakout first full season in the Bundesliga, Can is seemingly ready to make what could be deemed a step up to a title-challenging Liverpool side in the Premier League.

First and foremost, the crux of Can’s strengths lie in his versatility—a quality which will endear the midfielder to Rodgers hugely.

As WhoScored.com shows, Can was trusted to perform in equal measure in both central midfield and at left-back for Leverkusen, making 12 appearances in the former, whilst covering 10 times in the latter.

With question marks over the future of both Jose Enrique and Lucas Leiva at Liverpool, Can’s ability to play in both positions will work well in his favour.

Furthermore, the German possesses an immense physicality, which lends itself hugely to the defensive game, and in particular Can excels in headed duels, winning 60 percent of those attempted in the league, per Squawka.

Emre Can won 231 duels in the Bundeliga last season. No player under-21 won more. pic.twitter.com/1fWkJiNCF3

Can complements this with the ability to read the game well, and has proven his quality in judging an opposition pass and interception the ball to break up play.

WhoScored shows Can to have made 1.6 interceptions per game on average in the Bundesliga, a statistic which places the German above Liverpool midfielders Steven Gerrard (1.4), Joe Allen (1.1), and Jordan Henderson (1).

When on the ball, Can is remarkably adept with both feet—a trait which lends itself to cutting in from left-back to strike at goal—and is also comfortable dribbling the ball.

According to WhoScored, Can made 2.5 dribbles per game on average, with only Luis Suarez and Raheem Sterling (both 2.8) making more in 2013/14; furthermore, Squawka attributes Can with a 68 percent take on success rate.

Game of the Season

Perhaps the best of game Can’s season in 2013/14 came as Leverkusen won 2-0 away from home to Frankfurt at the beginning of May.

Starting in centre-midfield alongside Lars Bender, Can helped himself to a goal as Sascha Lewandowski’s men tightened their grasp on fourth place in the Bundesliga.

As well as contributing at the attacking end of the pitch, Can was a behemoth in the defensive areas, winning 78 percent of his tackles attempted (7/9), and moved the ball comfortably out of dangerous positions, winning all three of his attempted take ons; statistics courtesy of Squawka. The main facet of Can’s game that will require development under Rodgers is the player’s discipline.

In the German’s 29 appearances for Leverkusen last season, Can picked up nine yellow cards; no Liverpool player received more than seven yellow cards last season, with even the customary Gerrard caution not accumulating as many as Can.

In the physical environment of the Premier League, Can may need to tailor his game so as not to become a target for referees, much in the way Suarez did in 2013/14.

Elsewhere, within Rodgers’ system, Can’s passing accuracy of 78 percent, per Squawka, will need to be worked on.

Of Liverpool’s regular starters last season, only Suarez (75 percent) had a worse passing accuracy than the German.

Naturally, this may have been due to the system in place at Leverkusen, but will need to be worked on at Liverpool nonetheless.

How Can Would Fit in at Liverpool

As a comfortably—and, importantly, consistent—versatile option, Can should find his first-team opportunities at Liverpool fairly broad.

Primarily, it would be assumed that Can has been signed to provide depth in the centre of midfield, and compared to Lucas he presents a far more progressive, attractive option.

Whilst Lucas clearly contributes more defensively at this moment in time, it is worth noting that Can—at 20-years-old—is a more well-rounded player more capable of deputising for Gerrard at times next season.

As well as providing competition for the Englishman, Can will also be able to play further up the pitch and vie for a spot with Joe Allen, alongside Jordan Henderson.

Furthermore, Can provides cover at left-back, and providing Liverpool sign Alberto Moreno, this would allow Jon Flanagan perhaps to specialise in his natural right-back position.

A young player, able to contribute to the first team immediately, Can has the potential to develop into an exceptional player for the Reds, and represents a great piece of business for Rodgers.

Do you think Emre Can is a good signing for Liverpool? Let us know in the comments below.