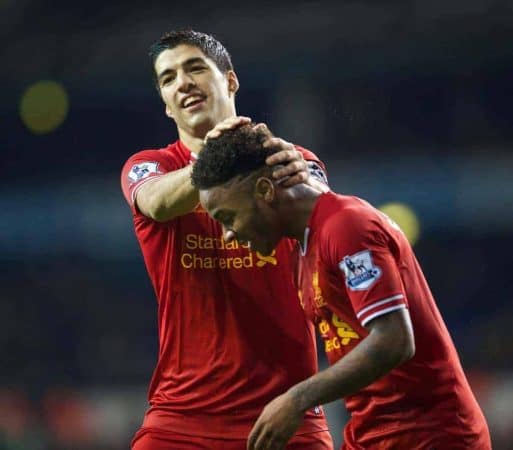 Raheem Sterling Should be a Central Figure for England vs. Italy

After impressing Roy Hodgson in training, Jack Lusby writes that Raheem Sterling should start for England against Italy on Saturday at the World Cup.

Following an exceptional run of form towards the end of Liverpool’s successful 2013/14 Premier League season, Raheem Sterling was rewarded with a call up to Roy Hodgson’s England World Cup squad.

Having featured previously for the Three Lions, a devastating contribution in games such as the Reds’ 3-2 victory over Manchester City in April lifted the 19-year-old from squad periphery to international first-team status.

However, an unnecessary red card in a warm-up friendly against Ecuador last week could arguably have put paid to Sterling’s chances as a starting figure at the World Cup.

Surely the Liverpool man would have too little time to impress?

However, as reported widely, Sterling impressed beyond expectation on the first day of England’s Brazil training camp, a hallmark of the forward’s game the Reds have come to know so well.

Sterling shines again against the dramatic backdrop of Sugarloaf Mountain – so will Hodgson start him against Italy? http://t.co/TLHXdv84IU

BBC Sport’s Chief Football Writer, Phil McNulty, was on hand at England’s Brazil training camp to experience the dominant role Sterling played in these sessions, and referred to the way Hodgson’s “constant enthusing over Sterling suggests the teenager’s pace, dynamism and element of surprise have put him right in the frame.”

This is something supported by another journalist in attendance, the Daily Mirror’s Ollie Holt:

Sterling the stand-out in England training again today. He's got to be in the side against Italy. Form + sheer ability demand his inclusion

These are aspects of Sterling’s game that can be taken as a given by Liverpool fans, but as McNulty continues “Sterling stayed out in the heat and worked longer than many who would be regarded as certainties for Hodgson’s first XI,” this shows the commitment of a young player determined to play his way into a starting contention under Hodgson.

This is a player who, after experiencing a series of setbacks already in his young Liverpool career, has got used to demanding a starring role by genuine ability; an impressive, tricky goal in an earlier England training session evidence of this.

After having not been included in Hodgson’s starting XI against Ecuador last Wednesday—a bemusing oversight—Sterling was sent off for an over-enthusiastic challenge on the South Americans’ Manchester United winger Antonio Valencia.

This meant that the 19-year-old could not be included against Honduras in the Three Lions’ final Miami friendly, and McNulty quotes Hodgson as saying “It would have been nice to have given him a game beforehand, but now he’ll have to compete for a place not having had these warm-up games.”

Luckily, much like in Brazil yesterday, Sterling responded emphatically.

Gerrard: You judge a player on a set-back. Raheem was the best in training this morning– he was very sharp and lively http://t.co/KKBFRXP5uS

Receiving praise from manager and captain alike, Sterling can rest assured that he remains in the first-team thoughts of those in charge.

A hugely encouraging perspective from the England manager.

There is an argument that—paired with his increasingly impressive training performances—Sterling’s absence from these high-profile warm-up friendlies will add an “element of surprise” to the 19-year-old’s appearance at the World Cup.

The forward’s Liverpool teammate Jordan Henderson is one who subscribes to this idea, as the Daily Mirror reports:

“Possibly it could make him a secret weapon because he’s not played [in the friendlies]. Obviously, he will have been disappointed he could not feature, but in training he has looked very, very good, so he’ll be thriving on this.”

This is a notion further backed by another Red, Glen Johnson, as per the Daily Mail: “That would be ideal, if people don’t know what he’s capable of and underestimate him a bit…then he can prove them wrong.”

So how can Hodgson deploy Sterling as his secret weapon against Italy on Saturday night?

Much of the onus prior to England’s game against Gli Azzurri is on how Hodgson will cope with the impact of the much-vaunted playmaker Andrea Pirlo in the regista role.

This is particularly pertinent after the 35-year-old effortlessly tore apart the Three Lions from deep at the European Championships in 2012.

One way to curb such a threat would be to deploy Sterling at the tip of the midfield diamond, a position that the 19-year-old is familiar with after being utilised by Brendan Rodgers in this role for Liverpool in 2013/14.

Playing Sterling off the front two—likely Daniel Sturridge and Wayne Rooney—would allow the forward to use his energetic bursts and intelligent linkup play to get in behind Italy’s back line.

This would also allow the 66-year-old England manager to accommodate some of his more high-profile stars, namely the problematic Rooney.

Furthermore, playing in the same area of the pitch as Pirlo, England’s “secret weapon” may prove too much of a handful for the playmaker to be able to assert himself on proceedings effectively; Sterling’s defensive pressing can further stymie the Juventus man.

Hodgson seems convinced, and now is the chance for Sterling to prove himself on the world stage.

Should Roy Hodgson start Raheem Sterling against Italy on Saturday? Let us know in the comments below.