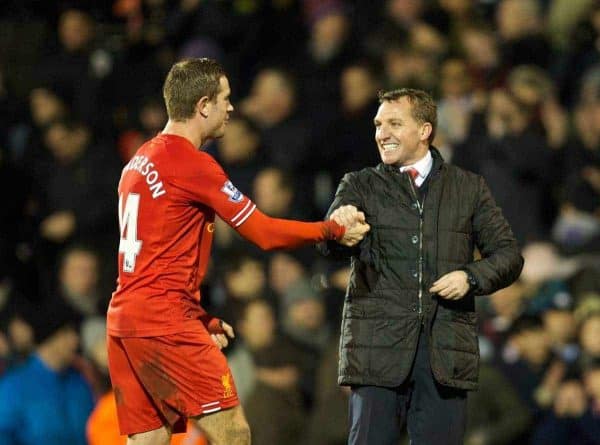 Best of British: 5 Home-Grown Talents for Liverpool to Look at this Summer

With an abundance of talent available across the United Kingdom, Jack Lusby looks at five potential home-grown targets for Liverpool this summer.

Roy Hodgson’s England stuttered, embarrassingly, to a halt on the big stage at this summer’s World Cup, with performances belying the talent at the 66-year-old manager’s disposal.

Six of these came courtesy of Brendan Rodgers’ Liverpool, a team who finished second in the Premier League just a month before the tournament—as Henry Jackson writes here, this failure was a case of system rather than personnel.

There is a great plethora of talent of English nationality both in the squad and elsewhere, as well as some true gems from Wales, Scotland and Ireland.

As Rodgers’ continued pursuit of Adam Lallana attests to, the Northern Irishman seems to have a predilection towards home-grown talents, and with this in mind here are five players from around the UK that Liverpool could look to this summer.

Rodgers is after another goalkeeper this summer, to provide competition for Simon Mignolet and add depth to an ever-challenging side, and one option here could be Reading’s Alex McCarthy.

After a hugely impressive debut Premier League season with the relegated side in 2012/13, McCarthy has dropped down a league along with his club and continued to perform confidently.

A man-of-the-match performance against+ the Reds in 2013 underlined this talent, and Rodgers is clearly a fan, after describing the Englishman as “brilliant.”

In 2013/14 for Reading, McCarthy kept 12 clean sheets in 44 Championship appearances, however more impressive than this is that the 24-year-old achieved this despite having to make 3.34 saves per game on average—the third most in the league, according to Squawka.

With the Royals consigned to another season in Championship for 2014/15, McCarthy should look to further his development at a higher level, and Liverpool may be the perfect place.

The dour performances of Glen Johnson for England at the World Cup will be of no surprise to any Reds fan, as the 29-year-old has underperformed for over a year now.

Rodgers remains seemingly loyal to the former Portsmouth man, but in the long term this is a position that needs to be addressed, not least due to Johnson’s high wages.

One solution to this would be Southampton’s Nathaniel Clyne, an highly underrated defender in the Premier League.

Signed from Crystal Palace in 2012, the 23-year-old has quietly and consistently performed for the Saints ever since, although throughout 2013/14 Clyne played in rotation with another commendable home-grown player, Calum Chambers.

Liverpool’s Jon Flanagan and Joel Ward of Crystal Palace complete a quartet of young English full-backs likely to contend with Johnson in the future under Hodgson, but as of yet Clyne is the most impressive.

Having already poached Rickie Lambert from St. Mary’s, and with interest in both Lallana and Dejan Lovren reported, perhaps Rodgers should go the whole hog and sign Clyne this summer.

Another problem position for the Reds comes on the other side of defence, with Jose Enrique struggling with persistent injury and the gormless Aly Cissokho returning to his parent club, Valencia, following loan.

The Spaniard Enrique seems unlikely to be the first choice for the long term, and as such Rodgers has already set his horizons on a new left-back this summer.

Sevilla’s Alberto Moreno was reported to be close to a move, but negotiations seem to have stalled, suggesting the Reds should perhaps look elsewhere.

Swansea City’s Welsh defender Ben Davies has already successfully supplanted his compatriot Neil Taylor for both club and country, and at 21 years old can only get better.

One of the youngster’s main strengths is his ability to the read the game, with WhoScored.com attributing Davies with having made 1.9 interceptions on average per game last season, compared to Liverpool’s Flanagan (1.7), Enrique (1.1) and Cissokho (1.1).

It will likely be difficult to convince Swansea to part with such a prize talent, but Davies would be a convincing long-term left-back for Rodgers’ Reds.

Having signed bullish central midfielder Emre Can already this summer, Liverpool have tightened up the defensive area of their midfield, and now should look to supplement the squad further up the field; an option here would be Derby County’s Will Hughes.

The youngster has been linked with the Reds in the past, and at 19 years old would be a solid addition to the squad, and one that would likely develop handsomely in years to come.

Hughes scored four goals and made six more, according to WhoScored, in 44 Championship appearances last season, as Derby made it to the Play-off Final, only to lose out to Harry Redknapp’s QPR.

A tidy passer with a maturity and tactical nous beyond his years, Hughes would be great signing for Rodgers’ Liverpool squad, and one who could contribute long into the future.

Any door still open on this transfer was thrown into doubt this week though—Hughes signing a new long-term contract at Pride Park.

A wild card selection in this quintet, West Ham United’s English attacking midfielder Ravel Morrison would be a surprise target for the Reds this summer, but one who would likely complement Rodgers’ squad adeptly.

A player of questionable temperament, but unquestionable talent, Morrison announced himself on the Premier League stage with a brilliant solo goal against Spurs towards the beginning of the 2013/14.

However, the 21-year-old’s role with the Hammers quickly dwindled, and a loan move to QPR followed in February, with problems involving the agent of West Ham manager Sam Allardyce reportedly playing their part in the switch.

A mercurial attacker, Morrison would require the man-management abilities of Rodgers to settle within the Reds’ squad, but another dynamic option in the North Irishman’s squad would be hugely welcome.

Which home-grown players would you like Liverpool to sign this summer? Let us know in the comments below.