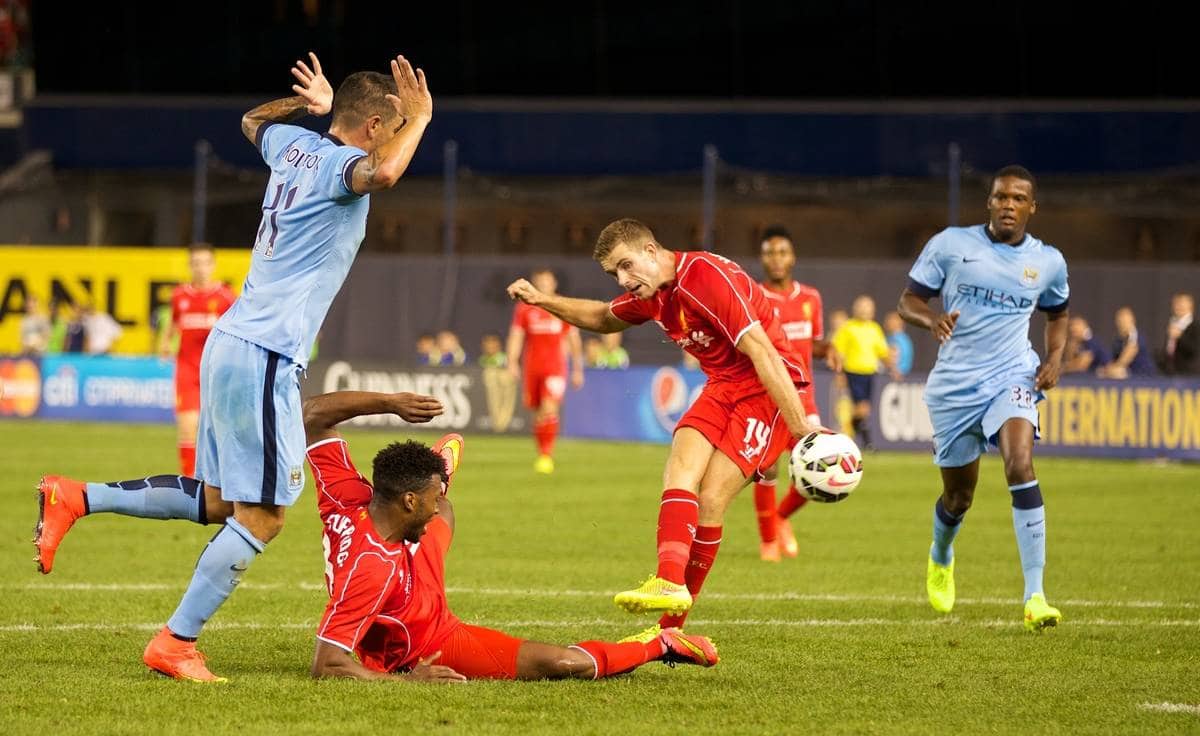 The 32-year-old had another solid night in goal for the Reds, dealing with everything thrown his way comfortably and exuding more calm that we have seen from him in the past.

Kelly has not looked the same player since injuries have curtailed his progress, and he looked out of his depth against the Premier League champions.

The 24-year-old never quite looks completely comfortable as a right-back, with centre-back his stronger position, and his future looks unclear.

Coates was excellent, and continues his very impressive, and surprising, pre-season form to date.

The Uruguayan made a number of timely interceptions, looked assured on the ball and didn’t put a foot wrong all evening.

Similar to his performance against Olympiakos a few days previously, Toure was barely noticed but largely solid against his former club.

The Ivorian was poor positionally at times, but in general he was reliable.

Although you have to take into account Enrique’s injury problems, he struggled against City.

The 28-year-old was given a torrid time by Jesus Navas, while going forward he often lacked quality in key areas. The Reds need a new addition at left-back.

Gerrard still looks to be easing himself back into pre-season, and he was relatively quiet against Manuel Pellegrini’s side.

The skipper was comfortable but unspectacular in possession, and although he made a few good defensive interceptions, he should have cleared the ball for Stevan Jovetic’s opener.

Allen was quiet but efficient- a typical Allen performance- during his 65 minutes on the pitch.

The Welshman showed some nice turns and deft touches, but there is a nagging feeling that he has to start influencing more matches.

Henderson was easily one of the best players on the pitch, if not the best, and continues to show just what a vital player he has become at Anfield.

His constant running and incisive passing were good throughout, and he curled home a terrific effort to level the scores in the second-half. The Brazilian has been superb in pre-season, and although it was one of his quieter performances of the summer, he still impressed.

The 22-year-old produced some typically silky touches and mazy dribbles, and had a number of decent attempts on goal.

Lambert has struggled so far during his Reds career, and he just couldn’t really get into the game against City during his 45 minutes on the pitch.

The former Southampton man didn’t link up particularly well with Daniel Sturridge, and he missed a glaring opportunity to give the Reds the lead in the first-half.

Sturridge had a poor opening 45 minutes, but looked far happier when Brendan Rodgers switched from the 4-4-2 diamond formation to 4-3-3 after the break.

The 24-year-old lost possession and failed to hold up the ball at times, and blazed his penalty over the bar, but he always looked a threat.

The Belgian made his first appearance of the US tour, and he ended being the hero following his saves from Yaya Toure and Navas in the shootout.

The 29-year-old was slightly better than he has been of late, but he did allow City to get in behind him too often in the second-half.

The youngster almost made the perfect introduction having come on at half-time, but his shot was saved well by Joe Hart.

Although fairly solid, he was also guilty of allowing City- Navas especially- to get to the byline on too many occasions.

Sterling was superb yet again, and was a definite contender for Man of the Match despite only playing half of the game.

The 19-year-old played a key role in Henderson’s goal, and his clinical late finish took the game to penalties. He also saw an equally ruthless strike ruled out for offside.

Can’s introduction added drive and dynamism to the Liverpool midfield, and it coincided with the Reds enjoying the better of the game during the final 20 minutes.

The 20-year-old also scored his penalty in the shootout, stroking the ball home with ease.

The Frenchman didn’t really have time to make an impact, but he did test Hart with a towering header late on.

The 27-year-old was reliable when he came on, and scored the winning spot-kick to put Liverpool top of their International Champions Cup group.

Who was your star man for Liverpool against Manchester City? Let us know in the comments section below.