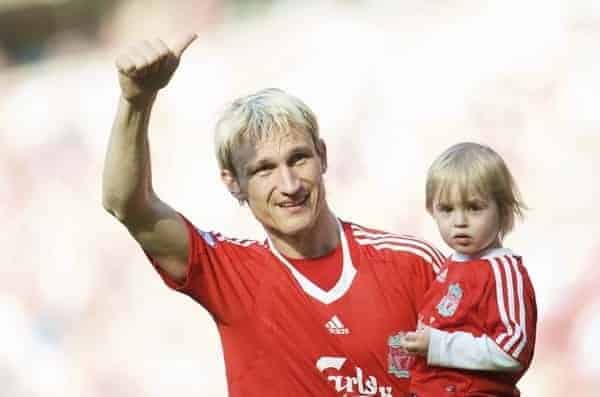 The signing of Dejan Lovren from Southampton is expected to strengthen Liverpool’s shaky rearguard next season, but who have been the best defenders the club have signed since the Premier League began in 1992? Henry Jackson selects his top 5.

Finnan was one of the most consistent, reliable players in Liverpool’s squad during the mid 2000s, as Rafa Benitez made the Reds a force again.

The former Republic of Ireland international was part of an extremely solid defensive unit alongside Sami Hyypia, Jamie Carragher and John Arne Riise, but he could also get forward and provide excellent service from wide areas.

He unforgettably won the 2005 Champions League, and the FA Cup a year later, and went on to make 217 appearances for Liverpool. A real unsung hero.

In a lot of ways Agger’s Liverpool career has been marred somewhat by injuries- he was widely regarded as one of Europe’s best young defenders when he arrived in 2006- but he has still been a terrific servant in his eight years at Anfield.

The 29-year-old is elegant in possession, possessing a wand of a left foot, and a commanding presence when fully fit. His crucial goal in the 2007 Champions League semi-final triumph over Chelsea will live long in the memory.

232 appearance in a Reds shirt is impressive, winning an FA Cup and League Cup in the process, but that total could be so much more more had injuries not hindered the Denmark captain. We may have seen him in a Liverpool shirt for the last time, with Barcelona reportedly close to signing him.

There’s not much to choose between Skrtel and Agger, but the Slovakian just gets the nod over his long-time teammate for his performances last season.

After a disastrous start to his Reds career, in which he scored an own goal against minnows Havant & Waterlooville in the FA Cup, he has grown in stature to become a very solid performer over many years.

Having lost his place in the side to an ageing Jamie Carragher in 2012/13, Skrtel produced a superb campaign last season, scoring seven times and holding the defence together with a string of influential displays.

He is physically dominant and very quick, and remains a key part of Liverpool’s plans under Brendan Rodgers for the foreseeable future.

The biggest compliment you can give Riise is that Liverpool have never replaced him with a player of his quality since leaving in 2008.

There has not been a better attacking full-back for the Reds in the Premier League era, and the Norwegian gave us many wonderful memories over the years.

From his dazzling run and finish against Everton to his sensational strike against Manchester United, Riise often produced in big games, and truly loved representing the club.

In total he made 234 appearances for Liverpool, scoring 21 times, and he was an integral part of the Champions League, FA Cup and League Cup-winning Reds sides of the mid 00s.

There has surely never been a better value-for-money signing in the history of Liverpool Football Club than the acquisition of Hyypia 15 years ago.

For a decade the big Finn was a colossus of a centre-back at Anfield, forming great partnerships with both Stephane Henchoz and Carragher along the way.

He was superb in the air, a wonderful reader of the game and a great leader, captaining the club before selflessly handed it to Steven Gerrard as age began to catch up with him.

When people talk about the greatest defenders to have ever played for the Reds, Hyypia is most certainly among the top four or five.