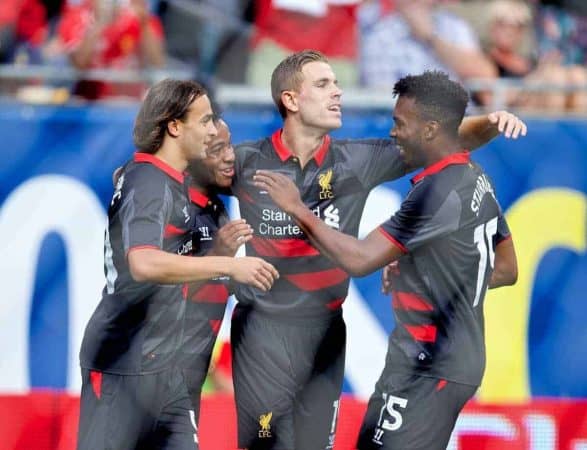 Liverpool overcame Olympiacos by a single goal in Chicago, with Raheem Sterling’s close-range strike the difference between the two sides. The 19-year-old shone throughout, while Lazar Markovic made a promising debut.

Brad Jones, Martin Skrtel and Jose Enrique were the only players who also started in the 1-0 loss to Roma on Wednesday, with Rodgers making a total of eight changes.

It took the Reds just five minutes to break the deadlock. Sturridge’s scuffed shot from the edge of the penalty area fortunately found it’s way to the on-rushing Sterling, and the 19-year-old finished clinically from close-range.

Rodgers’ side continued to dominate the early exchanges.

After a quiet first 20 minutes or so to his Reds career, Markovic won a free-kick in a dangerous area after a fine run. The resulting set-piece culminated in Gerrard firing a shot wide. Shortly after, Sturridge showed quick feet on the right wing, but his eventual shot was erratic.

As the half progressed Liverpool lost their stranglehold on proceedings somewhat- defensively they again looked edgy at times, and the signing of Dejan Lovren is a huge boost in that respect- but they always looked electrifying on the counter attack, with the pace of Henderson, Markovic, Sterling and Sturridge sure to give many Premier League defenders nightmares next season.

The score remained 1-0 until the break, and the Reds were worthy of their lead.

Rodgers made three changes during the interval, with Jack Robinson, Joe Allen and Philippe Coutinho coming on for Jose Enrique, Emre Can and Markovic.

Coates, Martin Kelly and Lucas were all introduced on the hour mark, in place of Toure, Johnson and Gerrard, and it inevitably killed the earlier tempo and fluency of Liverpool’s play.

Coutinho once again oozed class during his 30 minutes on the pitch, display wonderful dribbling skills and creativity. The 22-year-old has surely been the star of the Reds’ pre-season to date.

The Brazilian’s terrific long-range effort with 16 minutes remaining almost doubled Liverpool’s lead, and it was the only shot of real note on the Olympiacos goal in the second-half.

Although the side lacked something in an attacking sense after the break, defensively they were much improved. Martin Skrtel, in particular, was terrific. Just one unfortunate goal conceded in two games in America so far is a positive sign that things will be improved at the back next season. New full-backs remain a priority, however.

Andreas Samiris tested Jones in the dying seconds, while Allen almost put the icing on the cake after good work from Jordan Ibe.

The final whistle blew in Chicago, with the Reds recording their first victory of their USA tour so far. It was a solid, if unspectacular, performance, but one that saw Sterling and Coutinho once again outline what key players they have become at Anfield, and Markovic showing promise on his debut.

Rodgers went with his preferred 4-3-3 formation, with Markovic and Sterling either side of Sturridge, and Henderson and Can offering dynamism alongside the deep-lying Gerrard.