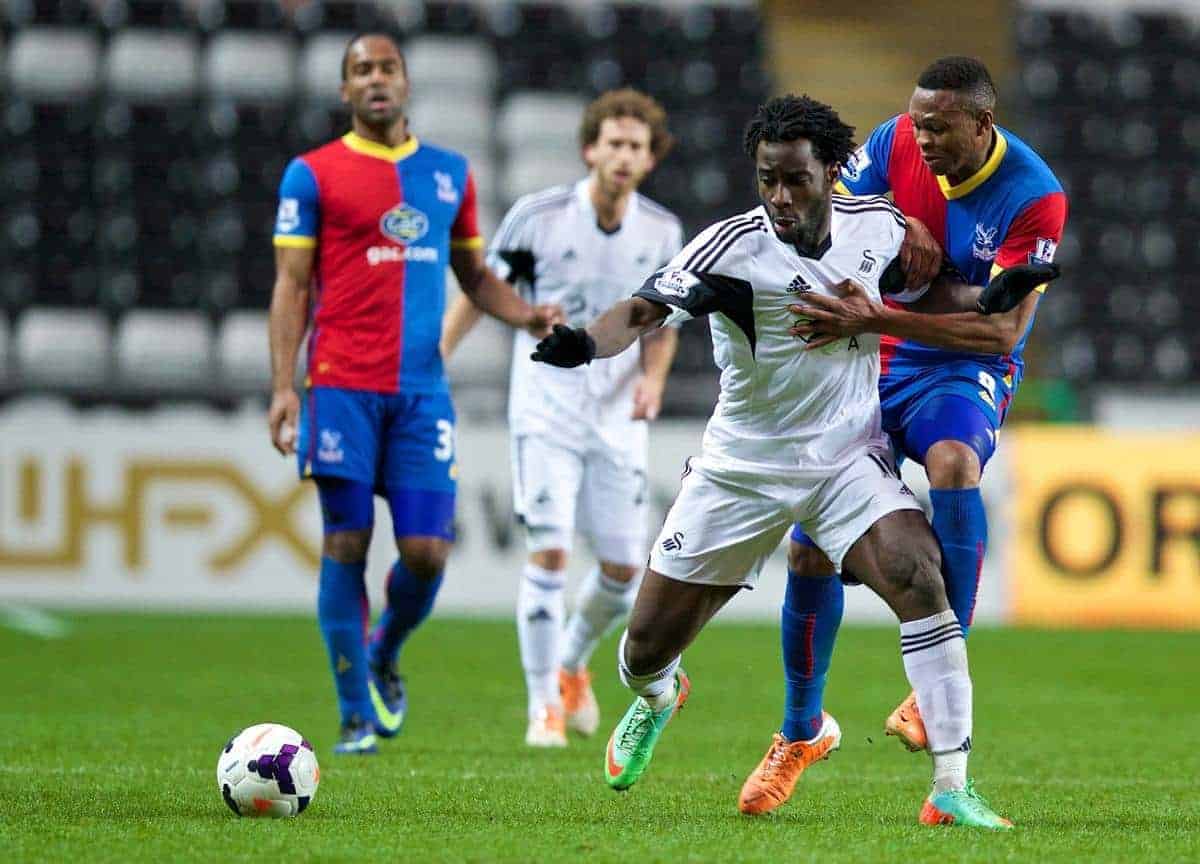 Reports this week have linked Liverpool with a move for Swansea City forward Wilfried Bony, Jack Lusby writes why the Ivorian would be a great option.

In the wake of Luis Suarez’s departure from Liverpool, the Reds have been linked with a wide range of forwards from the unlikely to the unwelcome; the latest this week has been Swansea City’s Wilfried Bony.

According to the Daily Express, the club are looking to pip oft-transfer rivals Spurs to the post by signing the Ivorian in a £20 million move.

The publication even suggests that “that Bony [was] currently on Merseyside discussing personal terms.”

Not always the most credible of sources, the Express were backed by a further outlet, with Sky Sports’ Pete O’Rourke claiming the sides were in “advanced talks” over the move.

Liverpool in advanced talks with Swansea over Wilfried Bony with player's agent thought to be meeting Liverpool officials. #LFC #swansfc

The signing of Bony would be a great one for the club, with the 25-year-old settling in to life in the Premier League swiftly following his £12 million move from Vitesse Arnhem last summer.

Whilst the striker would not be a replacement for the majestic Suarez, Bony would bring a new facet to manager Brendan Rodgers’ attacking system at Liverpool, and as such should justify a £20 million fee.

PHOTO: The #Swans join in with Bony’s celebrations. pic.twitter.com/PSUy6V4cJZ

Ending in 12th place in the 2013/14 Premier League, last season was somewhat of a mixed bag for the Welsh club, marred by managerial traumas and misfiring stars.

The Swans finished ninth the season prior to that, with Danish manager Michael Laudrup an unequivocal success following the departure of former boss Rodgers.

Laudrup was aided somewhat by the remarkable goalscoring of Spanish trequartista Michu, who finished the 2012/13 campaign with 18 Premier League goals.

Unfortunately the following season didn’t go as well for either manager or player—Laudrup was sacked in February whilst Michu struggled with injuries and form, scoring just two league goals.

One shining light in a disappointing season, aided by the restorative qualities of new boss Garry Monk, was Bony, who hit the ground running almost immediately.

The Ivory Coast international scored 16 league goals in 34 appearances, creating another four for his teammates.

The 25-year-old took this form to the World Cup, scoring a further two goals in three tournament games, although Bony was unable to guide his country through the group stages in 2014.

Nevertheless, 2013/14 can be considered a huge success for Bony on a personal level, and there is no surprise that clubs such as the Reds are taking an interest.

PHOTO: Bony celebrates after equalising for a second time against @LFC. #swans pic.twitter.com/rHjn1SChb3

Whilst there are many aspects to Bony’s game, the main, outstanding contribution within this is sheer goalscoring ability.

As mentioned, 16 goals in 34 Premier League games is an exceptional haul, particularly in a maiden season having transferred from a much lower level in the Eredivisie.

Take into account Bony’s further nine goals in further competitions and the Ivorian boasts one of the most impressive returns of any Premier League player in 2013/14.

Furthermore, on this level the striker can be considered the most in-form of any current Premier League striker, with his goal rate in 2014 unequalled.

Wilfried Bony: No player has scored more Premier League goals in 2014 than Bony (12)

This ability is aided somewhat by a phenomenal strength, alongside a surprising level of pace, giving Bony the ability to function within a fast-moving attacking system such as Rodgers’ at Liverpool.

Bony showed through last season that he is able to bring others into the game with an eye for a pass and a proficient technique on the ball.

According to WhoScored, the Ivorian made 25 key passes last season, only four less than Daniel Sturridge.

The Swansea man possesses both the qualities to act as a striking foil as a No. 9, or as a lone striker in the target man role, with great touch, technique, aerial ability and, most of all, finishing.

Overall, Bony is a solid performer, without many weaknesses to his game.

One outstanding weakness would be his average passing accuracy of just 74.1 per cent—an aspect which may need working on within Rodgers’ system at Liverpool.

However, it is worth pointing out that Sturridge had an average passing accuracy of 79.3 per cent, whilst Suarez found his man just 74.8 per cent of the time—this shows that perhaps this isn’t an asset necessary for a goalscoring forward.

The striker’s main weakness, in a way akin to that of Sturridge, is his oft-selfishness on the ball.

On several occasions last season, Swansea players were left standing aghast that Bony had sent another shot high or wide of the posts, due to his sheer amount of shots taken.

The Ivorian made 108 attempts on goal last season, scoring at a rate of one per 3.2 shots.

Sturridge made 99 shots, scoring every 3.4 attempts.

However, as the Englishman showed throughout last season, within the Reds’ tactical system this is strained from players, with wider team functionality the key notion.

If Bony were to succeed under Rodgers, this is something that will need to be nurtured.

How Bony would fit in at Liverpool

Much will be made following the loss of Suarez about the need to directly replace the Uruguayan—this is essentially impossible.

Rodgers would look to Bony as a component within a new system, compensating for the loss of his former star.

Ex-Swansea man Iwan Roberts told BBC Sport that Bony would an ideal acquisition for the Reds, claiming “Bony fits that bill. He scores goals and can play that lone role.”

The Ivorian would give Rodgers that much-needed flexibility within what will likely be a rigorous 2014/15 campaign.

It is likely no player will live up to the reputation of Liverpool’s former Uruguayan maverick, but Bony won’t need to; the main aspect that the 25-year-old will bring to Rodgers’ squad is goals and link-up play.

I like Bony but with all attacking mdf's looks like it will be one striker most of the time Sturridge main man, so price important.

The striker, however, would need to reconcile with the fact that a consistent first team role may not be guaranteed—it is beyond doubt that, with 21 league goals last term, 24-year-old Sturridge is the main man.

But if Bony is able to live with that situation, and the spectre of Suarez isn’t given too much thought, the Ivorian will be a great signing by Rodgers for Liverpool.

Would Wilfried Bony be a good signing for Liverpool this summer? Let us know in the comments below.