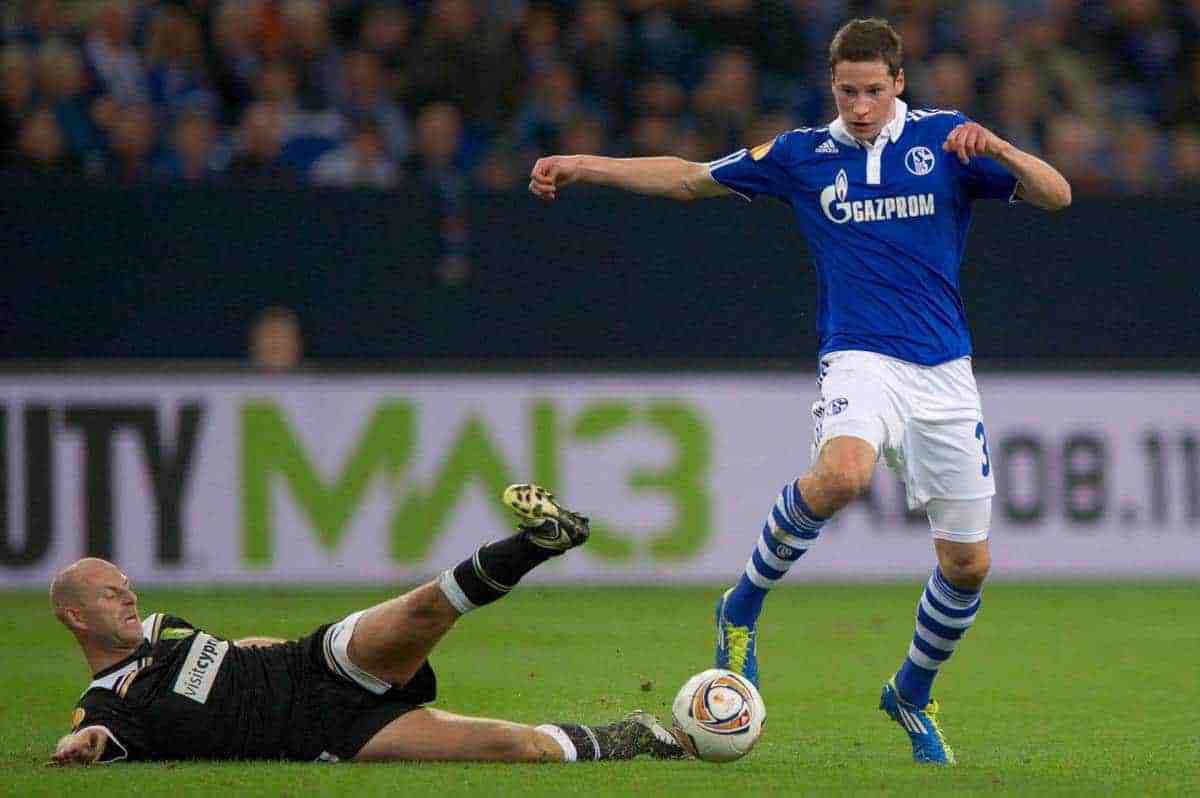 With Germany romping to the World Cup Final with a 7-1 victory over Brazil on Tuesday night, Jack Lusby looks at which German players Liverpool should realistically target.

Adopting a malleable, probing style not unlike that of Brendan Rodgers’ Liverpool, Germany completely untied the closely knitted fabric of Luiz Felipe Scolari’s side.

With that in mind, and with the most impressive of team performances clear in the memory, there are a plethora of targets in this squad that the Reds could look to this summer.

Ignoring unrealistic targets such as Kroos and Philipp Lahm, here are three of Loew’s charges that Liverpool should look to buy this summer.

(All statistics courtesy of WhoScored.)

Whilst his natural position is at centre-back, 6’2” Schalke man Benedikt Hoewedes has been deployed at left-back throughout the World Cup due to his versatility—along with the sheer quality of the central options available to Loew.

The 26-year-old made 19 Bundesliga appearances last season as Schalke stormed to third place and the promised land of the Champions League.

Deployed mostly in the centre of defence for his club, Hoewedes displayed his exceptional ability to read the game throughout 2013/14.

The defender made on average 2.7 interceptions per game, higher than that of Liverpool’s principal centre-backs Martin Skrtel (1.7), Mamadou Sakho (1.5) and Daniel Agger (1.1).

Hoewedes’ ability to play all across the defence would surely appeal to Rodgers, as the defender would be able to cover for problem position left-back as well as fielding his day job at the heart of defence—perhaps alongside long-term marshal Sakho.

A recently signed contract may prove an issue, but Hoewedes would be an excellent option Rodgers when it comes to his defence.

Predatory box-to-box midfielder Sami Khedira has been linked with a move to Premier League rivals Arsenal in recent weeks, with the Daily Mirrorreporting that the 27-year-old could be available for as little as £18 million.

As evidenced with his dominant showing against Brazil, Khedira is a genuine, world-class central midfielder, and a player who would add steel and nuance to Rodgers’ side.

Struggling with injuries throughout last term, the former VfB Stuttgart man made just 13 La Liga appearances last season, and as such has seen himself on the periphery more often than is just.

Both solid as a defensive midfielder and hugely adept in attack — particularly with his ability to cover ground quickly—Khedira would suit Rodgers’ system at Liverpool perfectly.

Whether the signing of Khedira would affect the balance of the Ulsterman’s squad, however, remains to be seen—players such as Jordan Henderson and Philippe Coutinho have surely nailed down their spots for the long-term.

However, the opportunity to sign a player such as the German international would be hard to pass up.

Coming on as a late substitute in Tuesday night’s victory, fleet-footed attacking midfielder Julian Draxler made his first appearance at this year’s World Cup.

The midfielder is prodigious young talent, but perhaps it is one tournament too early for Draxler to feature heavily.

Rodgers has bulked up his forward line with the signing of Adam Lallana recently, and the acquisition of Lazar Markovic is surely soon to follow, but the Reds manager would likely require one more reinforcement in these positions.

At just 20 years old, Draxler has enormous scope for development in a Liverpool shirt whilst also being able to perform from the off.

Furthermore, the midfielder featured heavily in the Champions League in 2013/14, making eight appearances, scoring three goals and creating one more.

It is likely that the German would compete with players such as current attacking midfield incumbent Coutinho if he were to move to Merseyside.

The Brazilian is an exceptional creative talent, but Draxler managed to makes more key passes (2.3) on average per game than Liverpool’s current No. 10 (2).

With the club competing on more fronts next season, healthy competition and squad depth will be required—Draxler would come at a hefty price of around £37 million, but could be a long-term star for the Reds.

Although Dortmund man Marco Reus’ tournament involvement was curtailed by injury sustained in a pre-World Cup friendly, the forward is included here due to his ultimate suitability to the Reds’ squad.

The 25 year old scored 16 goals and made a further 13 assists in 30 Bundesliga appearances for Dortmund last season, and would be a superb replacement for the departing Luis Suarez.

With a reported release clause of £29.4 million, Reus would be a bargain signing for Rodgers’ Reds.

Which German stars would you like to see sign for Liverpool this summer? Let us know in the comments below.