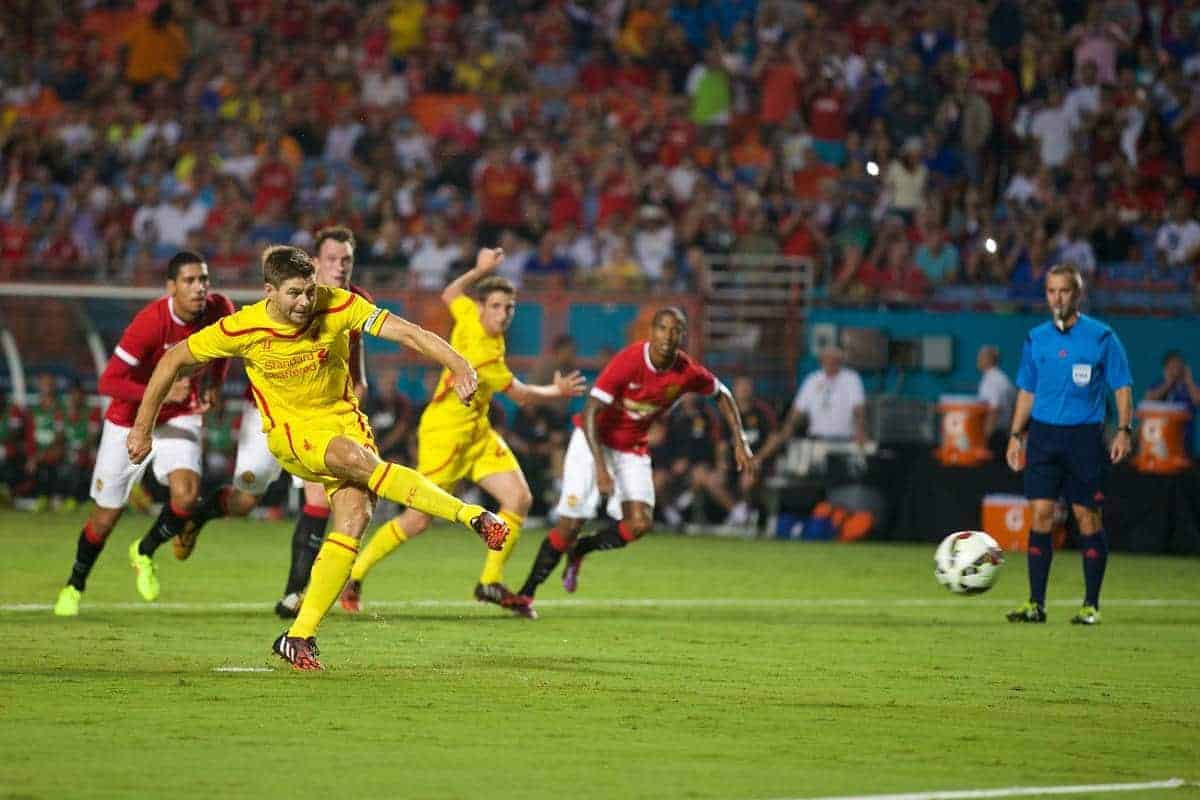 Liverpool lost 3-1 to Manchester United in the final of the Interantional Champions Trophy in Miami, with Wayne Rooney, Juan Mata and Jesse Lingard goals cancelling out Steven Gerrard’s opener from the penalty spot. There were plenty of positives to take from the game, however.

Brendan Rodgers named a strong starting lineup for the International Champions Cup final showdown with Manchester United, making a total of five changes from the side that beat AC Milan 2-0 at the weekend.

Although Liverpool started the better, it was United who had the first chance. Ashley Young’s cross almost fell to both Mata and Hernandez, but fortunately Sakho was there to make a terrific interception. Jordan Henderson then headed over at the other end following Gerrard’s dined free-kick, but the 24-year-old probably should have done better.

In the 13th minute, the first key moment of the game arrived with the Reds winning a penalty. Sterling won his second spot-kick in as many games, with Phil Jones the perpetrator this time. Gerrard stepped up and fired home emphatically to give Liverpool the lead against their bitter rivals.

Rodgers’ pressing game was working wonders, with United’s defence and midfield being forced into errors when in possession. It was an excellent pre-season game in general, with both sides giving their all and the pace of the match more like a Premier League game at times.

Midway through the first-half Coutinho forced David de Gea into a fine save from the edge of the box, as Liverpool continued to enjoy the better of proceedings. Their intensity, in particular, was great to see.

United’s defending continued to look shaky, and Sterling had a second penalty appeal turned down after a challenge by Herrera. It was debatable to say the least, and you wonder whether it would have been given had the earlier spot-kick not been awarded.

The tempo of the game did die a little as half-time approached, perhaps understandably, and it was Gerrard’s goal that separated the two sides at the break. Rodgers signalled the importance of the game by not making a single substitution at the break; the first time he’s done so on the tour of the US this summer.

Gerrard robbed Mata in the opening minutes of the second-half and set up Lambert, but the 32-year-old’s weak effort epitomised his lack of confidence at the moment. Seconds later a wonderful pass by Coutinho found Sterling, and his shot was deflected just wide. The young duo were both enjoying superb games.

In the 55th minute United drew level against the run of play. Hernandez’s cross was met by Rooney, and the 28-year-old produced a fine finish to make it 1-1. It was all to play for heading into the final half hour or so.

Two minutes later the game turned on its head, with Mata’s strike taking a slight deflection of Sakho and past Simon Mignolet. It was an undeserved lead, but it put United in pole position for victory.

On the hour mark, Gerrard, Allen and Lambert came off for Lucas, Emre Can and Ibe. Lambert’s display once again highlighted why another signing in attack is imperative in this summer’s transfer window.

A truly ridiculous moment occurred after 64 minutes, with Rooney tapping home after Young’s cross had clearly come back off the stanchion and not the crossbar. The goal was actually given, much to Liverpool’s dismay, but was ruled out seconds later once replays showed what had actually occurred.

Chances were few and far between in the final 20 minutes, with Martin Kelly almost pouncing from close-range, only to be denied by Chris Smalling.

Liverpool huffed and puffed for an equaliser that would have taken the game to penalties, but it was United who delivered the final blow thanks to substitute Jesse Lingard’s well-taken effort.

The final score was harsh on the Reds, and although their tour of the US ended in disappointment, there were still plenty of positives to take from the game. They will now fly home and prepare for their friendly with Borussia Dortmund at Anfield on Sunday.

Rodgers once again opted for his favoured 4-3-3 formation, with Skrtel and Sakho back alongside each other in the centre of defence. Johnson played at left-back in place of Enrique, while Kelly started on the right.

In attack, Sterling lined up on the left with Coutinho to the right, with their pressing, along with Henderson and Joe Allen, terrific in the opening 45 minutes in particular.

They lost their spark after the break, but there were more positives than negatives to take from the game without question.