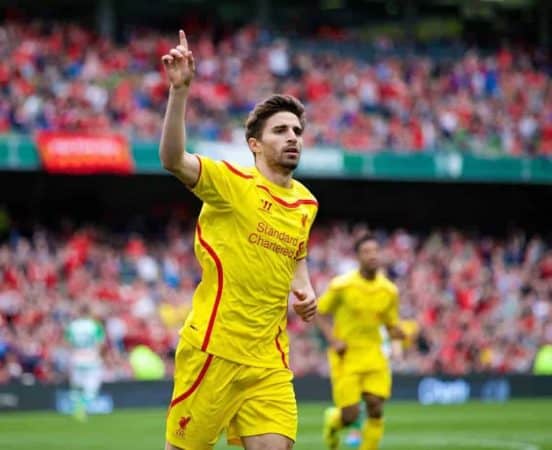 We bring you a round-up of the latest Liverpool transfer rumours, with the search for a big name replacement for Luis Suarez in full flow.

Liverpool’s apparent search for a replacement for former star forward Luis Suarez took an interesting turn on Thursday night, with a pair of big names linked with a move to the Reds.

Initial reports of a move for Monaco and Colombia centre-forward Radamel Falcao were met with instant derision from a cynical Liverpool fan-base, but according to The Guardian, these claims were legitimate.

Andy Hunter writes that the Reds made an enquiry for the 28-year-old, in an “eye-catching attempt to bring [the striker] to Anfield.”

However, the publication continues to suggest that any move for the lethal finisher has been thwarted by advanced talks with La Liga side Real Madrid.

“A deal with European champions Real is close to being agreed…Falcao is keen to return to Madrid having enjoyed a successful two-year spell in the Spanish capital with Real’s local rivals, La Liga champions Atletico.”

This has apparently led to the club turning their attentions to another renowned centre-forward: PSG and Uruguay star Edinson Cavani.

The Liverpool Echo suggests that any move for Falcao would have been a loan deal, costing the club “as much as £12m,” alongside the striker’s wages of a reported “£10m a year, tax free.”

Cavani perhaps remains a more realistic target—although both seem a flight of fancy during a crazy transfer season.

Phil Kirkbride reports that the 27-year-old’s agent, Claudi Anelluci, told reporters “I can confirm that Cavani heard proposals from Liverpool and Arsenal.[Cavani] already said he would love to play in England, but has not yet made a final decision.”

Perhaps most encouraging, if this most unlikely of deals is pulled off, is Anelluci’s suggestion that “[Cavani] is not interested in money and fame; he just wants to be happy playing football.”

These tentative searches seem to underline the ambition of the club in the wake of Suarez’s departure, and Kirkbride continues that interest has cooled in a lower reputation goalscorer: Swansea City‘s Wilfried Bony.

“The Ivory Coast international was on a list of potential replacements for Suarez but the Reds are understood to have cooled their interest.

“Bony’s buy-out-clause is believed to be £19m and his wage demands are likely to have put Liverpool off.”

Despite being a hugely effective finisher, perhaps the Reds are now turning their attention to forwards of higher pedigree than Bony this summer.

Whether a ‘marquee’ signing is the right approach remains to be seen.

Liverpool manager Brendan Rodgers is seemingly succeeding in whittling down his wage bill, with the departures of several first-team players growing closer.

Firstly, exiled Spanish goalkeeper Pepe Reina edged towards a move to Bundesliga champions Bayern Munich, having passed a medical with the Bavarian giants.

With a £2.5 million deal reported yesterday courtesy of The Guardian, all that remains is a smattering of dotted I’s and crossed T’s.

The deal will likely be completed on Friday.

Elsewhere, Italian striker Fabio Borini‘s move to Sunderland is still in the works, according to the Wearside club’s manager, Gus Poyet.

Poyet saying Borini deal still very much on, and he is confident he will come. Full details coming up shortly. #safc

Reports suggest that the Uruguayan remains confident of signing last season’s loan star, with the Reds having accepted a £14 million offer three weeks ago.

Poyet on Borini: "We're waiting, but it's still ongoing." More quotes to follow shortly on @SunderlandEcho

It is likely that Liverpool are waiting to secure the signing of a replacement striker before any deal for Borini can officially be sanctioned, as the former Roma man’s departure would leave only Daniel Sturridge and Rickie Lambert as Rodgers’ senior strike options.

Borini is clearly Poyet’s first choice, and that the Sunderland manager remains “confident” is an encouraging sign for all parties.

Would the signing of Radamel Falcao or Edinson Cavani be wise acquisitions for Liverpool this summer? Let us know your thoughts in the comments below.