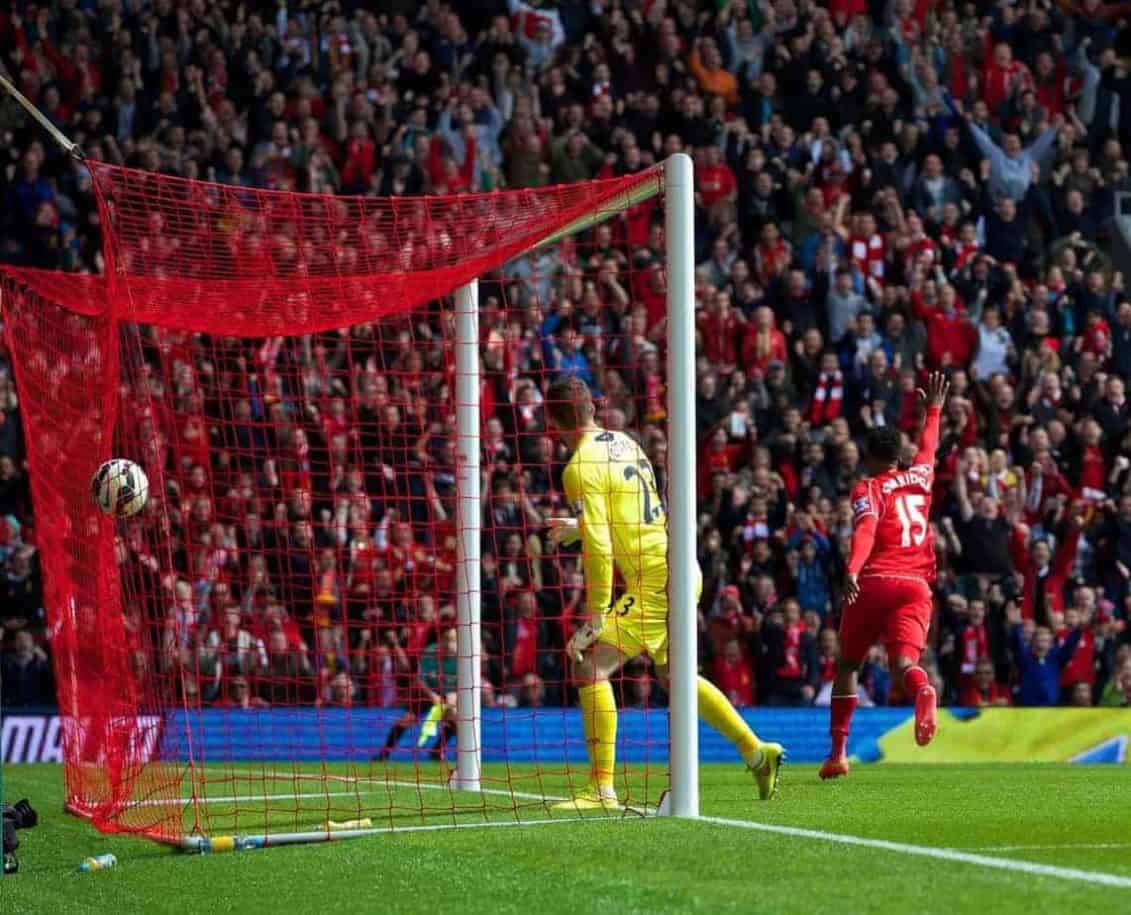 Liverpool edged an impressive Southampton side at Anfield, as goals from Raheem Sterling and Daniel Sturridge got their Premier League season off to a winning start.

Brendan Rodgers made just one change from the side that destroyed Borussia Dortmund last weekend, with Lucas Leiva replacing Emre Can.

Javier Manquillo and Dejan Lovren both made their competitive debuts for the Reds, while in-form duo Philippe Coutinho and Raheem Sterling supported Daniel Sturridge in attack.

Anfield was buzzing with anticipation, as Rodgers’ men looked to build on their fantastic second-place finished last season.

Sturridge had the fist meaningful effort on goal, firing wide from range, in what was a fairly low-key opening 20 minutes to the game. Glen Johnson, starting at left-back, also blazed over and Sterling tested new Saints goalkeeper Fraser Forster.

The 19-year-old got his season off to a flier minutes later, however, as he finished coolly in front of the Kop following a sublime through-ball from Jordan Henderson.

Southampton weren’t overawed though, with James Ward-Prowse and Morgan Schneiderlin both forcing Simon Mignolet into saves. At the other end Sterling, the Reds’ brightest player in the first-half, again tested Forster with a decent strike.

Liverpool took a 1-0 lead into the break, but it hadn’t been the free-flowing, dominant display that some had expected prior to kick-off. The windy conditions certainly hadn’t helped in that respect.

The second-half started shakily by the Reds, with Lucas twice needlessly surrendering possession in the middle of the park and Southampton growing in confidence. Anfield was surprisingly hushed too.

Sterling and Victor Wanyama both exchanged wayward long shots, before the visitors drew level. Nathaniel Clyne finished superbly after a neat exchange with Dusan Tadic, and it was richly deserved.

Koeman’s side continued to enjoy the better of proceedings, and Steven Davis wasted a glorious opportunity to give them the lead from close range.

Rodgers’ men were struggling to create any decent opportunities, with the likes of Coutinho and Sturridge lacking their usual creative spark. Henderson dragged a shot wide, but as the final 10 minutes approached the draw seemed more and more likely.

Substitute Rickie Lambert came on for his Reds debut late on, and his introduction coincided with Liverpool scoring the winner. Sterling’s flick-on found Sturridge with 11 minutes remaining, and the 24-year-old poked home clinically.

The Saints almost snatched a point in the dying minutes, with Mignolet wonderfully tipping Schneiderlin’s strike onto the crossbar and Shane Long failing to bury the rebound, but Liverpool hung on in a frantic finale.

It was far from vintage Reds, and the final whistle was met with great relief rather than joy by the home faithful.

Rodgers adopted his preferred 4-3-3 formation, but with Lucas in the side as well as Gerrard there was a complete lack of drive through the midfield.

It was further proof that the 27-year-old’s best days are behind him, and Joe Allen offered far more when he replaced the Brazilian.

Lambert’s introduction also showed that Rodgers is willing to be more direct this season, and the 32-year-old had a positive impact against his former club.